5 Stars for Curse of the Beast
By Ashley Lavering

Curse of the Beast is an amazing modern twist on Beauty and the Beast with a dose of paranormal. For those of you that love to read modern fairytale's this is definitely the book for you. Words escape me, when describing this book. Ashley Lavering really out did herself, her writing amazed. I was really surprised by this, seeing as Curse of the Beast is her first novel. The only thing I didn't like was how it ended, it leaves you with the biggest cliffhanger I've read thus far. Ashley leaves her readers wanting so much more, I can't wait for the sequel of Curse of the Beast to be released.

Tayla hasn't always had the perfect life and it's not getting any better. Tayla lives with her aunt, who has raised her since birth, seeing how her mother abandoned her just days after being born. Tayla is also helping raise her aunt's two daughters. After her uncle died, her aunt had a break down and stopped living her life, therefore, leaving Tayla to take up all the slack.

Tayla was home schooled until a few years ago, when her uncle died. Now her only escape from her home life is school with her best friend Chel. Tayla is also getting attention from Kyle Harrington, the hottest guy in school. Being Kyle's girlfriend would be a dream come true. That was until she found out he was a possessive psycho, who will pummel anyone who even talks or looks at Tayla.

Now Tayla is trying to avoid Kyle as much as possible, but he continues to stalk her. Tayla is constantly watching her back with the help of her bestie Chel. She fears for what Kyle may do. However, Kyle wasn't the only one she should have been watching out for. After a couple sightings of what Tayla believed to be a wolf, she has a run in with a strange man named Beast. And Tayla's life isn't getting any better. Beast isn't just a man, he is cursed as a werewolf. By day he is a man and by night, a wolf.

Tayla tries to escape when she meets Beast, but realizes she can't. They are now connected by the Curse. This Curse will only allow them to be so far from one another. Tayla has no choice but to stay with Beast, in his home. Before leaving with him she soon finds out he has a secret and it involves her mother.

Spending so much time together, Tayla and Beast learn to tolerate each other and find out they are connected more than they thought. You see this isn't Beast's first connection, and Tayla is a lot different from any of the others. Tayla can feel Beast's pain and when he is in trouble, she goes to his rescue only to be the one needing to be rescued in the end. Now Tayla's life is hanging in the balance and Beast is willing to let her go back home, but what will she decide? In order for us to find out what her decision is we must wait for the second book of Curse of the Beast.

Whats up for Grabs??? 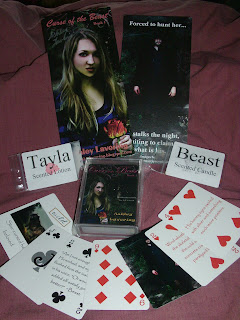