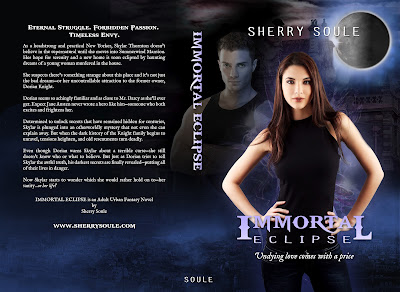 I am thrilled to reveal the new cover for IMMORTAL ECLIPSE, a new Urban Fantasy Novel by Sherry Soule coming from Moonlight Publishing. It will be hitting bookshelves this Fall (November) 2012. So mark your calendars! Another reason you might want to mark a reminder for the release date is because a portion of the proceeds from book sales will benefit the Scleroderma Foundation: http://www.scleroderma.org
Cover was designed by the creative talents of Parajunkee Designs: http://parajunkee.net
Book trailer by Parajunkee Productions coming soon!

Eternal Struggle. Forbidden Passion. Timeless Envy.
As a headstrong and practical New Yorker, Skylar Thornton doesn’t believe in the supernatural until she moves into Summerwind Mansion. Her hope for serenity and a new home is soon eclipsed by haunting dreams of a young woman murdered in the house.
She suspects there’s something strange about this place and it’s not just the bad dreams—or her uncontrollable attraction to the former owner, Dorian Knight.
Dorian seems so achingly familiar and as close to Mr. Darcy as she’ll ever get. Expect Jane Austen never wrote a hero like him—someone who both excites and frightens her.
Determined to unlock secrets that have remained hidden for centuries, Skylar is plunged into an otherworldly mystery that not even she can explain away. But when the dark history of the Knight family begins to unravel, tensions heighten, and old resentments turn deadly.
Even though Dorian warns Skylar about a terrible curse—she still doesn’t know who or what to believe. But just as Dorian tries to tell Skylar the awful truth, his darkest secrets are finally revealed—putting all of their lives in danger.
Now Skylar starts to wonder which she would rather hold on to—her sanity…or her life?

So, what do you think of the cover?