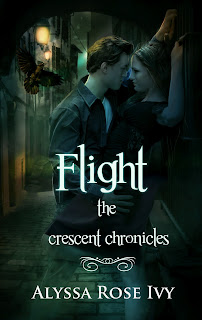 Sometimes you just have to take flight.

A summer in New Orleans is exactly what Allie needs before starting college. Accepting her dad’s invitation to work at his hotel offers an escape from her ex-boyfriend and the chance to spend the summer with her best friend. Meeting a guy is the last thing on her mind—until she sees Levi.

Unable to resist the infuriating yet alluring Levi, Allie finds herself at the center of a supernatural society and forced to decide between following the path she has always trusted or saving a city that might just save her.

My Review:
Flight is an amazing story about betrayal, passion and deceit. Once I started reading this, I couldn't put it down. Flight was different from a lot of the shape shifting stories I have read, it put a new twist on the word shifter. I also loved the fact that the characters still had real issues that most people could relate to on some level. Alyssa Rose Ivy is an awesome author and I can't wait to read the next book in this series!!

When Allie goes to work for her dad at a hotel for the summer, she meets Levi and is drawn to him immediately. But, she's sworn off guys after her last relationship, however, Levi is not taking no for an answer, he can't seem to figure out why Allie isn't responding to his advances, he knows she's attracted to him but she just wont give him a break.

That is until he shows her another side of him that he hasn't showed many. You see Levi isn't human he's Pteron, a shifter of sort. Although he has showed Allie who he is, she knows she still doesn't know just who he is and why doesn't understand why there's so much secrecy.

Soon Allie is kidnapped and held for ransom by the enemies of the Pteron and when she finds out who Levi really is, she is furious, she is tired of the lies and secrecy and she even though she knows she has feelings for him the betrayal is just too much to bear.

Alyssa Rose Ivy lives in North Carolina with her husband and two young children. Although raised in the New York area, she fell in love with the South after moving to New Orleans for college. After years as a perpetual student, she turned back to her creative side and decided to write.