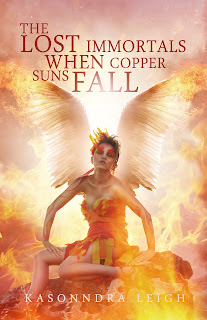 When Copper Suns Fall is full of action, betrayal, and secrets. Once you start this book you wont want to put it down. Chela, the main character is fierce, strong, determined, and passionate in everything she sets her mind to.

Chela's twin brother, Micah, is in a coma, she is determined to find out what happened to him, she knows the Tainted's are behind his fall and she will will stop at nothing to help him.

Now the Tainted's are after her, they want her for who she is and what her memories hide. Chela's mother was an Epiclesium, making Chela and her brother one's too. However, living in Castle Hayne's they must hide their identity. They live in a society ran by Tribunal, where their every move and decision is watched.

Chela is soon caught using magic, which is illegal and is sent to Minders Camp but first she must face the Governors Sword Champion at SwordFest, which is where she meets Faris and Seth. Both Hot and both of the Angel blood, one a Tainted, the other a Caducean.

On top of everything else, Chela has been chosen to defeat the Beast, who the citizens of Castle Hayne fears most. But once she is face to face with the Beast she sees him for who he really is and not the monster he is made to be.

KaSonndra Leigh did awesome, I love the characters in this story, I felt like I could connect with them on some level, except maybe some of the Tainted's just a little too crooked for me but that's the point, she made you feel angry, sad and even made you're heart swell up at the really mushy parts, she did an amazing job and I can't wait to read the sequel.


New Description for the Lost Immortals

It has been fifty-five years since the angels of the Great Apocalyptic War attempted to wipe out humanity. Now a new nation has been built where alchemy is forbidden, and angels fear for their lives as they hide among the mortals.

The city’s leaders share one view on the ancestors of angels: shoot first, no questions. When her twin brother falls into a strange coma, sixteen-year-old Chela Prizeon vows to discover her role among these exiles, the royal angels known as the Lost Immortals.

Chela’s only hope lies with the mysterious, but infuriating leader of a rebel group. But can she trust this boy? Someone who can control her dreams and her heart.