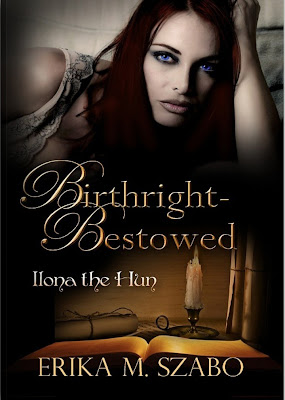 Blurb/Synopsis:
Ilona is an emergency room doctor, born into an ancient Hun tribe which still exists hidden amongst us with its strict and fiercely enforced rules. She doesn’t know much about her Hun heritage besides legends, customs and rituals that she continues out of respect for her parents whose sudden death ten years before devastated her. She plays her tune on her birthday given to her by her grandmother.  Elza – Ilona’s housekeeper - explains the purpose of the tune is to let the elders know she had come to age. Her mother didn’t have a chance to explain her inherited powers, but after her 29th birthday when she is considered as an adult by Hun standards, she begins to remember the forgotten instructions concealed as rhymes her mother was teaching her since she was a small child. Ilona discovers she can heal with her bare hands; she can rearrange the human body to its healthy state. This ability is exciting as well as frightening. She is conflicted between having confidence in her intelligence and inherited abilities while having no confidence as a woman. Her insecurity created barriers which keep others out, and I also keep her caged in. She’s been in love with her unsuspecting best friend Bela, when a dashing stranger explodes into her life. The sudden magnetic feeling frightens her and discovering evil in him doesn’t help either. A sinister dark man appears Ilona connects his presence with the series of mysterious deaths around her. Zoltan saves her life by jeopardizing his, which prompts Ilona to start fitting the puzzle pieces together and discovering the ancient tribal secrets that not only can change her future but the future existence of the Huns as well.

I’ve been publishing Alternative Medicine related books. I love healing as passionately as I love to read. Growing up with a father who was a closet reader (having a macho image allowed him to read only in secret which he shared with me after I caught him reading my book ‘The lady of the camellias’ and he left a few teardrops on the pages) he introduced me to many great books. The inspiration to write a novel came from my daughter. I’m an avid reader, and she was yelling at me to stop whining when I didn’t have anything to read. She said, “If you don’t have a book to read, than write one”. The idea shocked me a little at first, because English is my second language, but then I couldn’t stop thinking about it. The history of the Huns always fascinated me, they were my ancestors. I was playing with the idea of writing a fantasy story peppered with historical facts, and then I decided that it was a stupid idea after I started reading about how to write a fiction book. 'I am not a literary genius, I have no idea how to create a good story line or form characters and make up a plot.' I thought, but the idea didn’t leave me alone. I kept adding events and dialogs in my head to Ilona’s story. Not knowing how to do something properly had never prevented me from a accepting a good challenge before, so I sat down by the computer and I began writing. I've never been good at following rules or formulas, therefore I discarded the instructions and I made up my own rules. I began writing Ilona's story as a diary. 'Just for my own enjoyment, writing down the ideas that are swirling in my head is far better than being hunted by them.' I thought. I kept writing for months, and soon I realized that I never had so much fun doing anything in my life before. Somehow the characters came to life on their own, and they developed under my furiously typing fingers. Pretty soon I realized that I wrote about four hundred pages already. I gave the manuscript to my friends to read, and they urged me to publish it. I was elated when I received the publisher’s review about my story that said “I want to give you my overall impression of your work: You have a terrific writing style. You have obviously done a significant amount planning and preparation in crafting your work. Your prose is nicely written with details that capture the reader. Right from the start your plot was very engaging. You do a nice job of slowly making your way through the story with details and a certain voice that allows your reader to really interact with the characters (who are all round and very nicely developed). The greatest value in fiction, it seems to me, lies in what we can learn about our own lives when we take time to analyze someone else’s — even if that someone else is just a character in a story. Characterization is one of the most important elements of any successful story. I always love it when I leave a story feeling like I know the characters. This is true for your prose. So many authors rush through their stories without really developing them. Not you. Your book read like a movie in my mind. You have crafted a quality piece of writing.”
Social Media Links