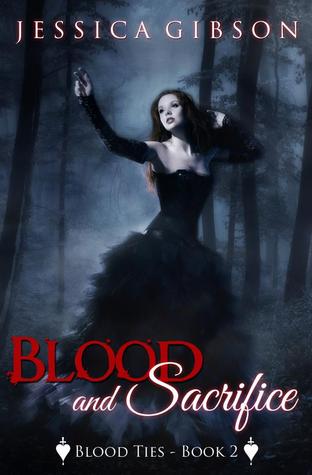 Bronwyn left everything behind when she left with Ronan. She became what he needed her to be and forgot the rest. Too bad the past won't stay in the past.

Rider bursts back into her life uninvited, and is not the man she remembers. There is an edge to him that was not there before. Bronwyn is torn by guilt over what he has become and anger at being blamed for it.

When Ronan ended his maker’s life, he inherited a line of vampires and a whole set of problems to go along with it. Bronwyn must decide if their love is worth it, worth the killing, and the constant disruption of their lives.

Is love enough? Can Bronwyn find herself again and strike a balance between who she wants to be and who Ronan needs her to be? Or will she lose herself all over again?

I have fallen in love with Jessica Gibson's work. She has once again blown my mind. The Blood Ties series has drama with every turn of the page and keeps its readers captivated from page one. The only complaint that I have for Blood and Sacrifice was that it was too short, I wanted more. Then the cliffhanger, I mean WTH Jessi, you can not just leave me hanging like that, I need book three like NOW!! I need to know what's going on. Needless to say this series is addicting and leaves you with a book high and wanting so much more.

Bronwyn is now living her life with Ronan once again even with all his flaws. However, Rider is not about to give her up, he is causing drama in Ronan's territory and isn't about to stop even if it means his life.

Bronwyn hadn’t made it a full four blocks when he fell into step beside her. “I see you made it back in one piece,” Rider said.
“We had some business in London.”
“Were you looking for me?” His voice was in her ear.
“Yes.”
“What do you have to say?” He pulled her into an alley and backed her against a wall, his arms positioned on either side of her neck. Rider brought his lips close to hers, barely a breath separated them.
“Stop this. All of it. It’s not you.” She turned her face away from his, not wanting the closeness. Her lips brushed against his cheek as she turned. She felt his muscles stiffen.
“What do you know about it? This could have been me all along, Bronwyn. Maybe the ‘me’ you knew was all an act, just like the act you put on for me—telling me you loved me, all the nights spent in bed screwing.”
“That’s enough. If you’re going to be rude, this conversation is over.”
Rider laughed, his blue eyes blazed into hers. “It’s over when I say it is and not before. I’m not done talking, yet.” He turned her face back towards his and crushed his mouth over hers.
She went limp, didn't bother fighting against him. Finally, after a moment, he released her and she balled her hand into a fist and punched him in the face. She could feel both his cheekbone and her knuckles crack from the impact. “What did I say before? You got your one in the alley. If you try it again, I may just remove a part of your body that will not be at all fun for you to reattach.” Her expression as cold as her tone. “Now, are you willing to listen?”
Rider leaned against the wall across from her and nodded.
“Good. Go home. Go back to L.A. You can’t be here, it will only lead to your death.”
“Who’s going to kill me, then? Ronan?” He sneered at her.
“Yes, Ronan. The only thing that has stopped him from ending you before this, is me. I will not be able to stop him, forever. So, do yourself a favor and leave.”
“Do you feel better then? You said your bit and now you can wash your hands of the whole situation?”
“I don’t want to watch you die; so don’t make me.”
“Why are you so sure he’ll win, Bronwyn? The last time we fought, we were pretty evenly matched.” His tone was cocky.
“He’s older and stronger. Don't go up against him. I couldn’t bear to see you die. Please, just go home. Leave this alone. I don’t care if you want to kill people or not, just don’t do it here.”