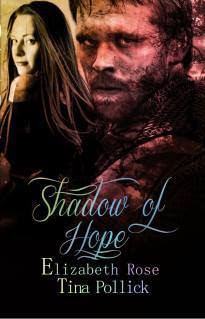 A secret passed from generation to generation. A line of heirs destined to protect those they once persecuted. One god who seeks to destroy humanity's last Hope...
Zoe is an ordinary woman who talks to her spirit, was raised by her coven, and doesn’t speak to her father. Until one day she finds out that the necklace left to her by her mom, holds humanities last hope
Evan is her reluctant protector, the last of the Templar Knights, who's watched her from the shadows since she was a teenage girl. When an assailant from the past emerges and steals the key to keeping the rest of the world safe, Evan and Zoe must form a tenuous alliance to get it back.
Up against a mysterious enemy older than time, and a really pissed off God of War, Zoe and Evan have the odds stacked against them as they try to reclaim the Hope of all humanity. That's if they can avoid killing each other.
Shadow of Hope is a fast paced, thrilling paranormal romance novella.

Author Elizabeth Rose grew up in a household where reading was a favorite pastime. Having been encouraged by her parents as a young child to pursue the greats (Dr. Seuss and Amilia Bedilla) she quickly found herself wanting more than to just read stories of Charming Princes in far off lands; she wanted to write them as well.
Having been a follower of Gabriel, Elizabeth found a strong bond of friendship with author Tina Pollick. Having many common interests, Tina and Elizabeth decided to attempt co-writing a novel together. The end process was both enjoyable and enlightening.
Elizabeth currently resides in Wyoming with her two dogs, Bard and Blade. She is graciously allowed to attend the needs of her tomcat Tinker. Shadow of Hope is her first book. Stop by and say hi!
Facebook: https://www.facebook.com/elizabeth.rose.58323431?fref=ts

Zoe: A twenty-two year old vet-tech with Wiccan roots. Unbeknownst to her, she is the Guardian of the Gateway leading to mankind’s greatest Hope. She is the only surviving member of her lineage, and her only living relative is her estranged father, Chris.
Evan: A twenty-seven year old amateur boxer, Evan spends most of his time helping out his local homeless shelter. He spends a tremendous amount of time training his body for combat. Evan is the last of a line of Templar Knights devoted to protecting the Guardians of the Gateway.
Aries: God of War, destroyer of nations and the puppet-master who seeks to eradicate the Gateway which contains Hope. He is malicious, manipulative, aggressive and will not stop until the world is consumed with bloodshed.
Lucian: A torn soul centuries old, Lucian perpetually reincarnates to serve his twisted master Aries. He is cunning, and excels at subvert forms of warfare. Once hand-picked by the Goddess Gaia to protect Hope, he betrayed his fellow Druids and helped bring about their eventual downfall. He helps Aries hunt the last of the Guardians.

There wasn’t any way she was going to eat anything he had to offer again.
“I figured you were hungry. You were out for a bit.”
Zoe glared daggers at him. “Good guess. Now you know why I won’t eat your food.”
“What’s that supposed to mean?” He flopped down on his chair, lifted the footrest and kicked back.
“Are you serious?”
His face remained blank.
“You know what. Thanks for the water and the couch to crash on. Nice meeting you, but I hope we never meet again.” She stood, grabbed her purse and went to the door. She turned the handle, but it didn’t move. Her stomach tightened, but not from nausea this time. Without turning, she asked the question she wasn’t sure she wanted an answer to. “Why is the door locked?”
“Because I locked it.”
“Why would you do that?” She stalked toward him, stopping inches from the chair.
He turned and smiled. “Because you were being chased remember?”
“Ummm, you thought I was crazy yesterday. What’s changed?” She folded her arm and tapped her foot. When he didn’t answer, she kicked the chair. “Answer me!”
“Nothing has changed. I still think you’re crazy. I called someone to come and get you as soon as they arrive, you’re free to go.”
“You don’t know anyone I do.”
“I don’t?” He glanced down at her purse.
“You went into my purse?”
“It’s not like you could talk.” He closed his eyes.
“Because you drugged me!” She kicked the chair again. “I’m talking to you. Don’t close your eyes like I’m not here.”
“If only I were that lucky,” he muttered.
“You have me here against my will…open the door and you’re problems are solved.”
His eyes remained shut. “He’ll be here within the next few hours. Eat your breakfast before it gets cold.”
She threw the bag at him and he caught it, setting it to the side of the chair. Her stomach let out a rumble in protest. “Where’s the bathroom?”
He opened one eye. “Through that door.” He motioned to the left with his head. “And if you’re thinking about trying to get out…don’t. You’ll never fit through the window, and if you do manage to get part of the way out and get stuck, I’m going to leave you there until your ride comes.” A smile slid across his lips. “On the other hand it’ll be quiet in here, so go ahead and try.”
She stomped out of the room and slammed the bathroom door shut behind her. She glanced around.  A stand up shower stall, a sink and toilet. She looked up and saw the small window near the ceiling. She sucked in her gut and let it out with disgust. There was no way she was going to fit through it. She reached under her shirt and rubbed the mirror that hung from the chain. A nervous habit, but that one piece of jewelry always brought her comfort. She called out to her other source of reassurance.
“Gran? Gran are you here?” she whispered.
A silhouette of a young woman appeared before her, just as it had every day since her grandmother passed away. “Merry meet my darling.”
“Merry meet Gran.” Zoe watched as her grandmother’s spirit floated around the room. “Do you notice anything different?”
Gran’s spirit continued to roam the small space as if she were in a mansion. She turned and faced Zoe. “You remodeled your bathroom…it’s very nice dear.”
Zoe sighed. “I didn’t remodel. A man named Evan is keeping me here.”
“You have a man! That’s great news indeed.”
“He’s not my man.”
“Oh, well that’s too bad.” Her spirit floated up to the window. The morning light streamed through her nearly transparent form.
“I met him last night. Someone was chasing me and Evan grabbed me and pulled me inside.” Zoe paced the small area, still trying to sort out what happened. It was easier now that the fog from her brain had lifted.
Her grandmother’s spirit turned to Zoe, her expression grave. “Someone was chasing you?”
“Yes.” She went on to tell her grandmother what happened and how she became Evan’s guest.
“Where is he now?”
Zoe pointed to the door and her grandmother went through it. She returned a few minutes later.
“Listen to me Zoe. If there is one person in this world you can trust, it’s the man sitting on the other side of that door.”