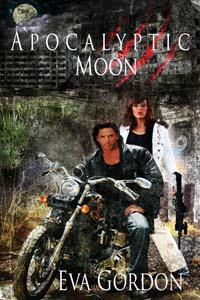 Ravaged by a global zombie pandemic, humanity’s survival depends on the secret society of shifters, but can they be trusted?

Book Blurb:
Dr. Dora Adler’s life has been in disarray since the beginning of the zombie apocalypse, but when she gets bitten by one of the undead her whole world is turned upside down. Held captive in a secret underground lab, the tall, muscular hunk in the next cell is her only hope for salvation. Unfortunately, he claims to be a werewolf. Yeah, and she’s supposedly a witch.

Dirk Gunderson is an alpha Arbor pack werewolf. Captured and collared, he’s sold to the zombie lab in hopes his blood serum can create a vaccine. He needs to escape, but not without the hot little brunette witch.

In the midst of enemy werewolves and the hordes of undead, Dirk and Dora’s sexual tension ignites a blaze hotter than the desert highway. Along their journey, they battle the inevitable: a werewolf must never take a witch as a mate.

I write fantasy and paranormal novels with a strong romantic element. I love to create stories that combine my passion for mythology, romance and werewolf lore. I also write steampunk and Victorian era historical and alternative novels. Busy sending them out to agents and publishers.
Apocalyptic Moon is the first in my After the Bane series. Coming soon will be Lycan Gladiator in my paranormal wolfish romance historical series, The Wolf Maiden Saga.
I have a BS in Zoology and graduate studies in Biology. I have taught high school Biology, Environmental Science and Anatomy/Physiology. When not in my den writing, I enjoy world travel, steampunk conventions, hiking, raptor rehabilitation and wolf sanctuaries.
I also teach online workshops on wolf lore ancient falconry and animal lore for Romance Writers of America and other writer groups. If you are interested in my workshops, please contact me.

Learn more about Eva Gordon below

“My first lycanthropy case.” The guy was psycho, but it didn’t matter, he was immune to Z-phage. He’d be another lab rat to experiment on. Maybe they’d give her a break and poke him instead, giving her injection bruises time to heal. Still, he was mentally ill and needed her help.
Mansfield chuckled. “More like lupus or rather Canis lupus.”
Dirk corrected. “Homo sapiens lupus.”
She rolled her eyes and huffed, “Can I change rooms? Maybe one with a view?”
Dirk gave her a seductive gaze. “Actually, my view is stunning.”
Her knees weakened and her voice disappeared. For once in her life, she had no smart-ass comeback.
Mansfield smiled. “All other rooms are reserved for the undead.” He unlocked her door and dragged her out. “Time for your daily shower.”
“Hey, take me along. I don’t mind sharing a shower with the doc.” Dirk winked at her.
Had he forgotten that he was strangled with a torture collar, locked up in a rat cage and oh yeah, the outside world overrun by zombies? It wasn’t the time to flirt.
As Mansfield escorted her out, she twisted around and glared at Dirk. “Bite me!”
“I promise.” He cupped his hands over his mouth and howled.
Damn real. She pulled away from Mansfield. “Great, I’m stuck in a psych ward.”
****
Dirk paced his sealed prison cell. He sniffed. The stench of rotting flesh seeped through the walls. This fucking place was infested with zombies. They must be keeping a zombie zoo. One breach and they’d be overrun. Soon the hot little brunette would fall prey to the zombies. He needed an escape plan. ASAP.
The soldier that escorted Jaeger out had the virus. The soldier reeked of fear. He hid his recent bite. Oh well, not sharing. Only he and the woman mattered. He needed the access code since the damn door was werewolf proof.
Mad Scientist Mansfield definitely thought Dora could mate a werewolf. Why hadn’t Jaeger mentioned that was impossible?

Where to purchase Apocalyptic Moon