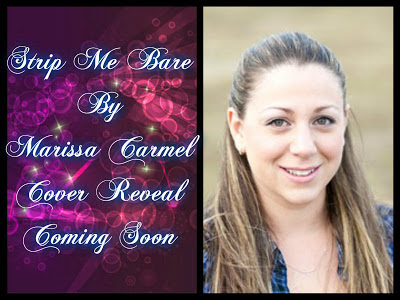 Book Description:
“I may have had more lovers than you, and I may take my clothes off for countless women, but you are the only one who can strip me bare.”

Do you ever stop loving someone just because they’re gone?
Five years ago Ryan Pierce disappeared from Alana Remington’s life without leaving so much as a post-it note behind. He was the one she gave her heart to, her soul to and her virginity to. So imagine her surprise when she finds him dancing at one of NYC’s hottest male reviews as Jack the Stripper.
Ryan never stopped loving Alana, and now that she serendipitously dropped back into his life, he’s vowed never to lose her again. But being together has its costs, and challenges Alana isn’t sure she can handle. She finally has Ryan back; but how in the world is she supposed to share the love of her life with half of the women in New York City?

Marissa Carmel has been writing since a young age and although it has always been for personal enjoyment, she finally decided breakout and share her imagination with the world. She hopes that her universe is as fun and intriguing to her readers as it is to her. Marissa Carmel is originally from NJ but moved to Maryland several years ago, she enjoys reading, writing, and catching up on her ever growing DVR library. She is currently working on the sequel to iFeel, Gravitational Pull and the third and final installment of the Vis Vires trilogy, Constellation.

I walk with Ryan to Culture, it’s a few blocks from his apartment and on the way to the train. It’s a warm spring evening and there’s more people on the street then one would expect for a Thursday night. As we make our way up to the club, I can see the line already forming outside. I recognize Lorenzo checking I.D.’s. He looks like a bad-ass Big Pun weighing in at three hundred pounds and sporting a thick, black goatee. We aren’t twenty yards from the Culture’s entrance when the shouting and cat calling starts. Half the women know Ryan’s name. Well, Ryan’s stage name, “Jack! Jack!” there’s whistles and screams. You’d think he’s a freaking rock star or something. “Jack the Stripper! Take it off!”
Really?
I look at Ryan, my eyes wide. He just shrugs. He’s not embarrassed or uncomfortable and on some level I
know he likes the attention.

Dear lord, save me from inflated egos.
“Lana,” Ryan murmurs into my ear as I look at the line of hungry woman, “you’re squeezing the shit out of 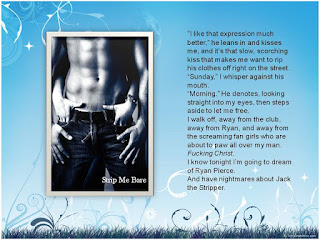 “Huh?” I glance over at him and let go. “Sorry.”  I think I’m going into shock.
“Hey,” he pulls me behind Lorenzo where the girls can’t see us, “Are you okay?” he asks as my back brushes against the brick wall.
“This is all just a little overwhelming for me. I need to get used to it.” I’m looking everywhere but at him.
“You said you’d try,” he reminds me, his voice on edge, spurring me to bring my eyes to his.
“I know.” And I meant it.
“Look, this isn’t who I am, it’s just want I do,” he tries to sway me.
“It’s okay Ryan, I’m okay. Just go to work and we can talk later.”
“When am I going to see you again?” He slants his body into mine, his scent overtaking me; it’s a mixture of sweet and spicy and Ryan.
“Sunday?” I mutter.
He gives me a dissatisfied stare.
“Saturday,” he tries to negotiate.
“Sunday,” I hold firm, even though three days away from him feels like an eternity; I need the time to wrap my head around things.
“Morning.” He stipulates.
I roll my eyes and hold out on my answer.
“Lana.” His voice is pressing.
“Fine.” I smirk.
“You have a good game face counselor.”
I know, I think with a smile.
“I like that expression much better,” he leans in and kisses me, and it’s that slow, scorching kiss that makes me want to rip his clothes off right on the street.
“Sunday,” I whisper against his mouth.
“Morning.” He denotes, looking straight into my eyes, then steps aside to let me free.
I walk off, away from the club, away from Ryan, and away from the screaming fan girls who are about to paw all over my man.
Fucking Christ.
I know tonight I’m going to dream of Ryan Pierce.
And have nightmares about Jack the Stripper. 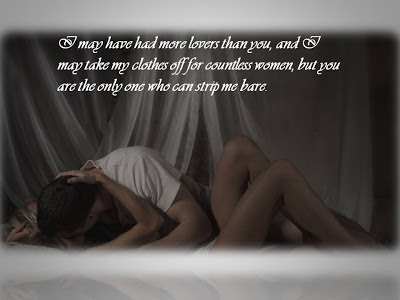