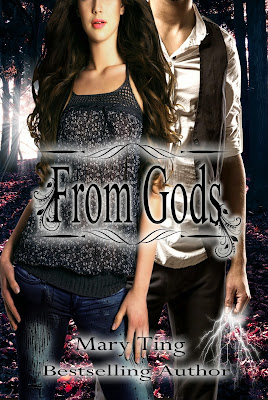 
Synopsis:
Did you just see a flash of lightning across the sky on a clear sunny day? It’s not from Mother Nature. It is most likely from Mason Grand, swoon-worthy demigod, one of Zeus’s descendants.

Skylar Rome is supposed to be having the best summer ever before she heads off to college.  Little did she know, her whole life was about to change while visiting her cousin. Nearly drowning at the beach due to unknown forces, one of the Grand brothers she’d just met, Mason, saves her life. Cool, collected, mysterious, and dangerously good-looking, Skylar is drawn to him from the start. Though she knows he is the type of guy good girls stayed away from, it seems he is always saving her life, and the attraction was inevitable.

Upon meeting the brothers, strange things begin to happen. When she accidentally kills one of the brothers, it throws her life into turmoil, as they search to find the answers. Implausibly, she gets caught up in a world of the descendants of ancient gods, all who have super powers. Not only is her discovery difficult to accept, evil beings are after her. Running out of time and running for her life, she must unravel a mystery. What do they want from her? Forced into a battle set into motion long before she was born, will she find the answers, or will she die trying?

Mary Ting resides in Southern California with her husband and two children. She enjoys oil painting and making jewelry. Writing her first novel, Crossroads Saga, happened by chance. It was a way to grieve the death of her beloved grandmother, and inspired by a dream she once had as a young girl. When she started reading new adult novels, she fell in love with the genre. It was the reason she had to write one-Something Great. Why the pen name, M Clarke? She tours with Magic Johnson Foundation to promote literacy and her children's chapter book-No Bullies Allowed.

After Skylar rang up a bill, she was bored standing behind the register. To keep herself busy, she turned to dust the counter behind her. She twitched when the sound of someone clearing his throat startled her.
“Umm…hi…sorry…how can I help you?” she said, turning to see something black. She looked up. When she noted who he was, she froze, and wanted to hide.
“I’d like to pay the bill.” His tone was low and soft as he handed the slip to her. The same, sexy tone went straight to her stomach, causing a tingling sensation.
“Sure…of course.” She paused while looking at the screen. Feeling the weight of his stare, she suddenly forgot what to do as warmth flushed to her face. What do I push first? Finally, it all came back to her. “That’ll be twenty dollars and twenty-five cents.”
When he handed her the exact change, his hand brushed against hers. She gasped inwardly from the mere touch of his skin. Then a millisecond later, she jerked back from the shock he had just given her, sending electricity down her spine. “Ouch.” Startled, she looked right at him.
Flinching in the same way as her, he frowned, looking baffled and then annoyed. “I’m sorry,” he murmured under his breath, and curled in his fingers to make a fist.
“That’s okay,” she accepted and lit a small, quick grin. After all, it was an accident, though she couldn’t understand how it had happened. The diner had tile floors, not carpet, and it wasn’t windy. It was the hottest month of the summer. But what did she know about these things, anyway?
From the corner of her eye, she saw Nick stand, looking their way and honing in on their conversation. He grinned slyly then sat back down. Did he find Mason shocking me amusing?