Blog Tour & Giveaway: The Virgin Charmer by Rachel A Olson 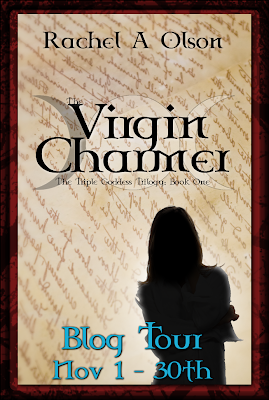 Hope Richards has only ever known the life of a big city girl. When her boss gives her an ultimatum, she decided to try out the country life during her forced vacation. After falling in love with a mysterious old mansion on the edge of a town that time forgot, Hope finds herself caught up in a whirlwind of someone else's crazy love obsession, and realizes in the middle of it all how lacking her own life is in that department. Hope is faced with a decision: return to the mundane life she thought was her passion, or find a way to experience something far stronger that she secretly yearns for.

Somewhere amidst her forty-hour job and playtime with her three-year-old, Rachel finds time to walk the streets of worlds only existing on manmade paper. She resides in small college town Northwestern Nebraska with her young son, just a few blocks from a city park, the public schools, and her parents. She enjoys socializing with adults, sipping strawberry wine, and head banging to music that doesn't carry a beat worth the effort of rock star hair slinging.

"The paranormal world is a much more desired realm. There's no limit to possibilities, no comparison to probabilities, no concept of actualities. There's no solid platform for racism, judgment, or hierarchy. It is exactly the manifestation you choose it to be, darkness and death included."

“Oh, no he did not!” Abigail yelled, throwing her hair over her right shoulder to dramatize her anger. Hope was momentarily blinded by visions of Luci Tristan, the stuck up prom queen from her high school days. She had to fight to hold in a giggle.

“Relax, hun. He’s obviously got some pent up anger he needs to release. Let him use you as his verbal target for now. It’s better than him using your face as his punching bag.” Abigail stared at Hope in absolute shock.

“I cannot believe you just suggested that my Garrett has the ability to hit me.” Hope raised both brows at her younger friend, a bit shocked herself.

“And I cannot believe you’re backing him after he called you a bitch.” The two stared at each other, stuck in a battle of estrogen. Finally, they simultaneously burst into laughter, the air quickly clearing of all bitter anger.

“You’re right. I shouldn’t be so harsh on him. I just don’t understand what his problem is. He was perfectly fine until…” Hope nodded knowingly when Abigail refused to finish her thought.

“Until I came along. I know what you mean, and I don’t understand it either. He acts like he wants to be my friend, and when I tell him it’s not an option, he throws a kiddie tantrum.”

“You told him that?” Abigail’s voice was full of true shock and admiration. “Why would you tell him that?”

“Because your friendship is what matters to me. I have no interest in getting to know him.” Hope inwardly kicked herself for lying through her teeth. No matter how many times she told herself the same thing, she knew she was lying. The magnetic pull that Garrett sustained was addictive. Each time he was around, it grew harder to resist, and each time he was away, the hollow ache in Hope’s chest grew. She would be absolutely insane if she didn’t recognize how she truly felt. Not that it mattered in the least. She could never allow herself to get close to Garrett.

“You are a true friend, Hope.” Abigail, gave Hope a light hug, beaming with gratitude.

“It’s nothing. He’s just a stupid little boy. I’m eight years older than both of you. I’d feel like I was robbing the cradle!” Hope forced herself to laugh alongside her friend, but her stomach was in knots. For once, her head and her heart were on the same page. For once, Hope wanted to shoot both to.