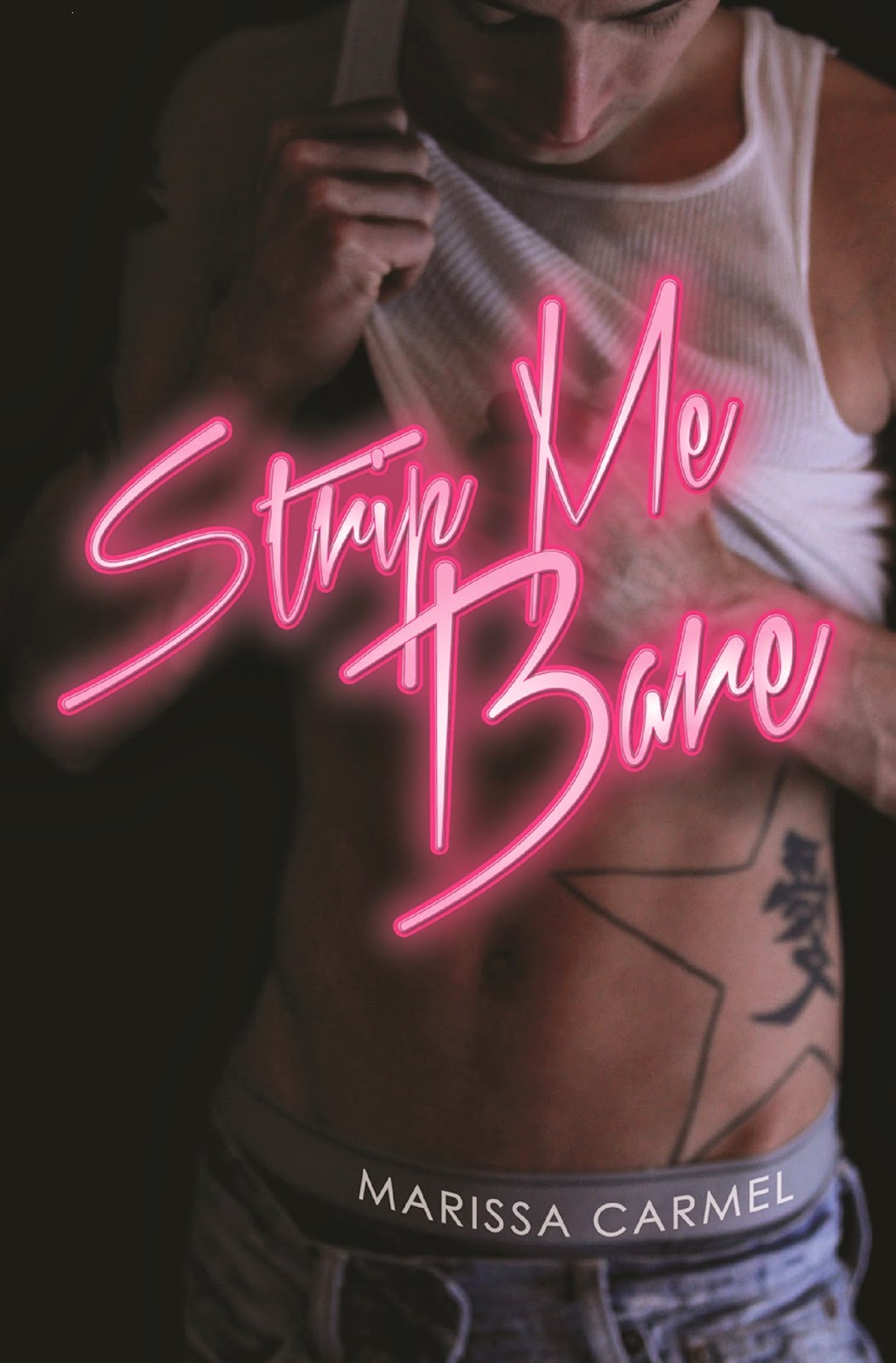 “I may have had more lovers than you, and I may take my clothes off for countless women, but you are the only one who can strip me bare.”

Do you ever stop loving someone just because they’re gone?
Five years ago Ryan Pierce disappeared from Alana Remington’s life without leaving so much as a post-it note behind. He was the one she gave her heart to, her soul to and her virginity to. So imagine her surprise when she finds him dancing at one of NYC’s hottest male reviews as Jack the Stripper.
Ryan never stopped loving Alana, and now that she serendipitously dropped back into his life, he’s vowed never to lose her again. But being together has its costs, and challenges Alana isn’t sure she can handle. She finally has Ryan back; but how in the world is she supposed to share the love of her life with half of the women in ?

Marissa Carmel has been writing since a young age and although it has always been for personal enjoyment, several years ago, she enjoys reading, writing, and catching up on her ever growing DVR library. She is currently working on the sequel to iFeel, Gravitational Pull and the third and final installment of the Vis Vires trilogy, Constellation.
she finally decided breakout and share her imagination with the world. She hopes that her universe is as fun and intriguing to her readers as it is to her. Marissa Carmel is originally from NJ but moved to

Praise for Strip Me Bare-
This story was absolutely amazing. Marissa Carmel is fabulous and her writing style is phenomenal. You can feel the emotions coming right off the pages into your heart and soul…It's hot and steamy and trust me you will say Oh MY! Read it, read it, read it!- Amazon
This book is all about second chances and starting over, learning to trust and finding yourself. It's an amazing read- Amazon
5 stripping stars- Angie's Reading Dungeon
This book surprised me in the best way. The way it's written makes the story flow perfectly, and I absolutely adore Alana's spunk. And the fact that Ryan fights to get back what he lost the moment he sees Alana again tugs and pulls at the heart strings in all the right ways. I absolutely cannot wait for the next book with these two characters to see just how this all started.- Amazon

We stop in front of some hanging crystals. They clink as Ryan pushes them aside, “after you.”  I walk under an orange spotlight, into a small space with a white leather couch deep enough to lie on and walls a warm golden yellow.
Ryan steps in behind me and presses his body flush against mine. My mind races.
Is he really going to do this?
Am I really going to let him?
Can I even handle this? Five minutes ago he was with another woman. Quite possibly in this same room doing God only knows what.
“Why do you do this Ryan?” I expel. I know he explained it in words, but I need to experience it to truly understand.
He ambles around me so close; the only thing separating us is a whisper of air.
“I told you, the money,” he says as he unbuttons his shirt.
“You said women too,” I watch him cautiously, my gaze jumping between his eyes and his chest.
“That was before you walked back into my life. You’re the only woman I want to touch now. The others, like you saw before, it’s just an act. A business transaction. It’s what I have to do to get what I want.”
“Doesn’t it make them feel used?” I flick my eyes up at him.
“It mustn’t. They always come back.”
“You like it. I saw your face. That wasn’t an act.”
Ryan stands right in front of me, his shirt unbuttoned and dangling open. “I won’t lie to you Alana, I’ll never lie to you,” his tone is hard, but seductive. “I do like the attention. But it’s not real. It’s my job to sell attractiveness and fantasy, and I do it well. But that’s all it is, fantasy and I know it. When I’m with you, that’s my real.”
My breath catches when he says the word real. I can’t help but find the irony in his words; I’m exactly to him what he is to me. Two people one and the same, both living a double life to get what they want; a future and each other.
And that is what I want. A future, with Ryan.
I go to put my hands on his chest, but he steps away shaking his head no. “In this room, it’s all about you,” he walks around, stopping right behind me. “You have to tell me what you want Alana,” he whispers in my ear and I almost go limp, the sound of his voice is erotic as hell.
I swallow hard, but can’t utter a single word, because truth be told, I have no freakin’ idea what I want. At least, not in this scenario.
Ryan starts to rub my shoulders. I think he can feel my hesitation.
“Why are you so tense? This is supposed to be fun.”
Fun? The word rattles around in my head. Fun - a time or feeling of enjoyment or amusement.
Okay, let’s have some fun.
I turn around to face him and our eyes lock. “Show me.”
“Show you what?” his tone dripping with sensuality.
“Show me Jack the Stripper.”
Holy fuck! 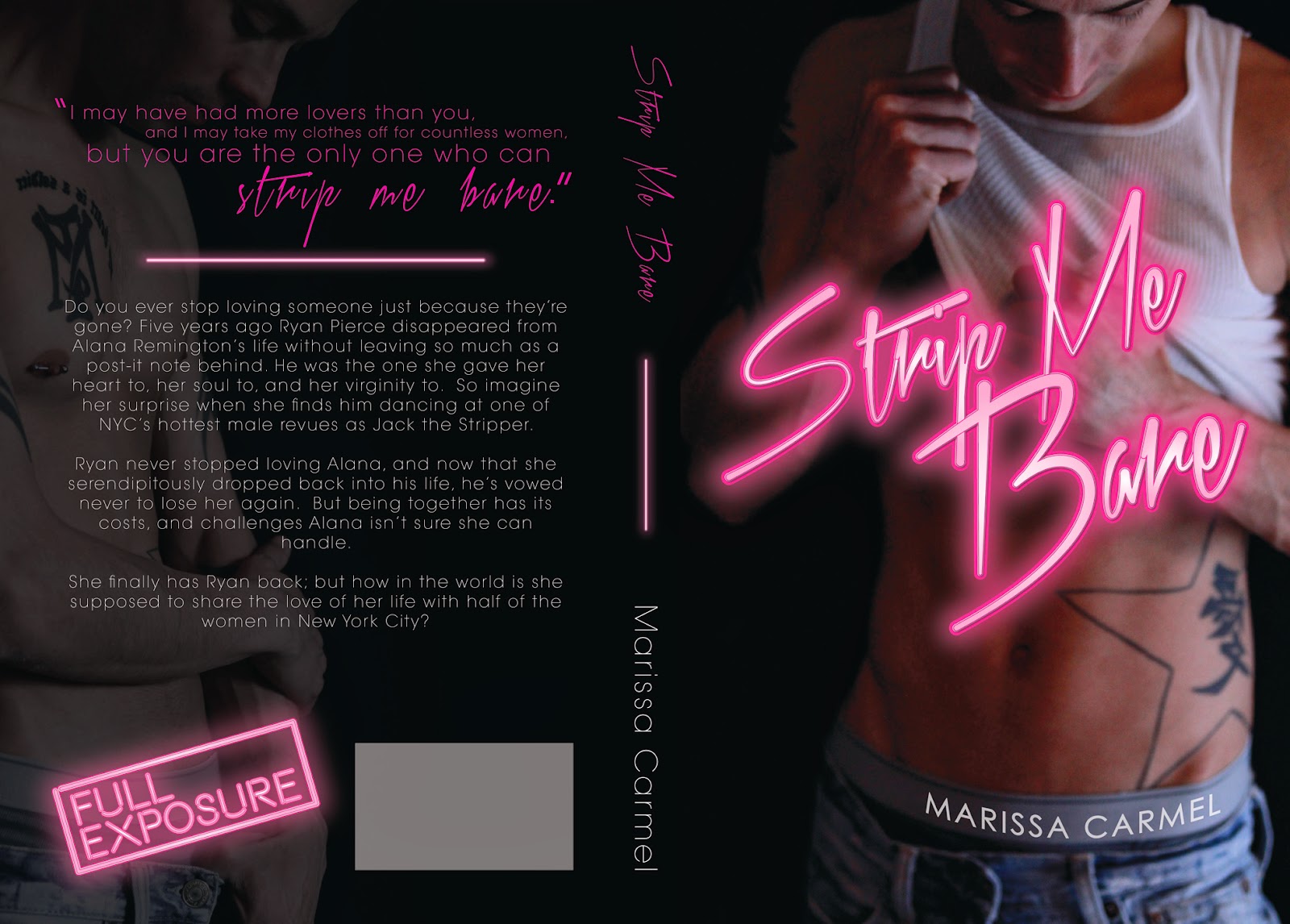