~Blog Tour & Giveaway~ Your Soul to Take by Sean Hayden 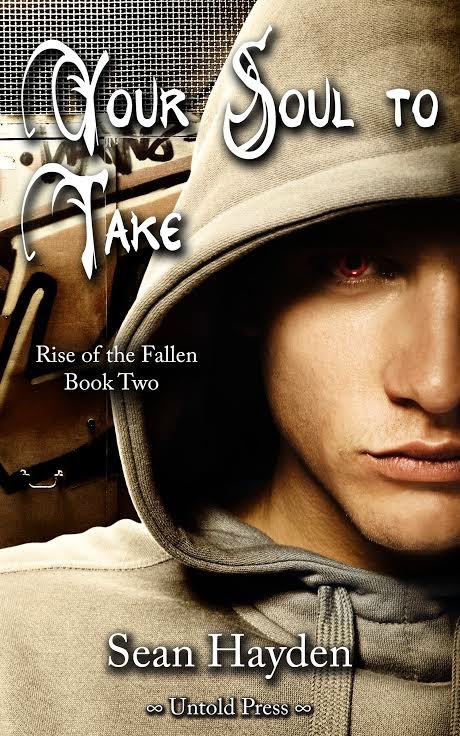 By Sean Hayden
Book 2 of Rise of the Fallen
Published July 12 2014 by Untold Press (www.untoldpress.com)
Young Adult Paranormal Romance
Word Count: 67 000
Pages: 233
ASIN: B00LR89QLS
Goodreads Book page: https://www.goodreads.com/book/show/22716817-your-soul-to-take
Blurb You know your life sucks when your sister's a vampire, you're a demon, and your girlfriend is literally an angel.
How could it possibly be any worse? Try having something ripping the souls out of your friends, ending up with a psychotic stalker, and having romantic urges for your best friend who also happens to be your demon mentor. Nobody ever said life was easy, but things went from bad to worse faster than you can say, "I sold my soul for a bag of Cheetos."Just to add insult to injury, the Fallen have decided to give me a new job. While being a Reaper might sound good on a resume, ripping the souls from monsters isn't all it's cracked up to be. As a matter of fact, I'm not sure what the Fallen have planned for me. All I do know is if they don't get my wildly powerful magic under control and teach me how to stay alive when everybody wants to kick my butt…all hell could break loose. Literally.

Born the son of a fire chief, Sean naturally developed a love of playing with fire. His family and friends quickly found other outlets for his destructive creativity. Writing is his latest endeavour

Always a fan of the macabre, mythical, and magical, Sean found a love of urban fantasy and horror. After writing several novels in this genre, he found, fell in love with, and immersed himself in steampunk. He has always wanted to rewrite history and steampunk gave him that opportunity.

Sean currently lives in Florida as a fiber-optic engineer as well as an author. He was blessed with the two most amazing children he could ever hope for, has met the absolute love of his life, who coincidentally is his partner in everything. His hobbies include grand designs on world domination as well as a starring role in his own television sitcom.