~Blog Tour~ Memoirs of an Immortal by Evangeline 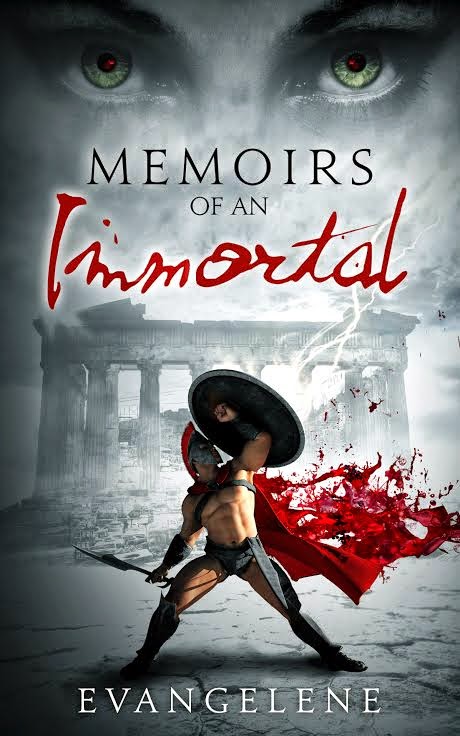 That's what it means to have an Eternal Life

This is the world that Psykhe and her sisters now belong to. A world surrounded by myths and legends. It's a world that she needs to discover to find her true self.

Psykhe never knew she was an immortal, but after the death of her husband king Leonidas she was forced into a world she thought only existed in myth. She is one of five immortal sisters whose journey takes her around ancient Greece dealing with various gods and mythical creatures.
Amidst the development of her powers, the ruthless martial training and discovery that the gods are not all what they appear to be, Psykhe along with her sisters fight malevolent forces that threaten mankind. Despite all the chaos around her, she goes through the journey of falling in love again, only to have it threatened by her past.

Evangelene was born and raised in Montreal Canada. She currently lives with her husband who at times drives her nuts. She has been going to Concordia University for over ten years as a Classical Civilization and Linguistic student. The pull to the ancient world was too great for her to let go, so she continues her education so she could feel closer to the world she identifies with. She reads nonstop devouring books like its food, loving the feeling of being lost in a world that another author has created.
Links:
http://www.amazon.com/Memoirs-Immortal-The-Series-ebook/dp/B00D9RD3QO/ref=sr_1_sc_1?ie=UTF8&qid=1399779013&sr=8-1-spell&keywords=memmois+of+an+immotals

I was on the hill behind the palace overlooking the city. There amongst the undergrowth was a headstone.
Died in battle was engraved into the stone.
Here lay my husband. I was told that the bodies of all the soldiers were buried in the battlefield were they fell, but he had asked that if anything were to happen to him, he be brought back here.
I collapsed in front of his headstone.
“My love, now where am I supposed to go? Now that you’ve left me.” Tears blurred my eyes.
“Why? Why did you bring me here, to a strange place, where I could be no true use for you? Did I really cause you so much trouble?” I swallowed hard, my insides burning. “If it meant reliving every moment again, I would go through worse for you, Leonidas, my love. I wanted to scream. I wanted to yell at you, call you names, but this is the last time that I will be with you. How could I ruin this moment?” I lay down and fell asleep crying.
A hand touching my face awakened me. I jerked up and produced my dagger, but before I could attack, I realized it was a woman.
She was beautiful, with long sandy colored hair, she wasn’t taller than I was, but she was slender. She wore a tight leather breastplate and a lined skirt that stopped before her knees. The bow that she had behind her back was larger than her, taking up most of her body, but I noticed it had no string.
“Oh, I’m so sorry, I woke you? And here I thought I could bring you over without any problems.” She tilted her head and smirked.
“Psykhe, get up, we need to go now.” She reached out her hand and waited.
“Who are you? And how do you know my name?” I was frightened then. My defenses were down and I was weak.
“Come on, get up, it’s time.” She pulled me up effortlessly and began to yank my arm, but I pulled my arm away.
“I’m not finished yet,” I yelled. “I’m not going anywhere, especially with you,” I huffed.
I wasn’t ready to leave Leonidas just yet. I wanted another moment, just one more.
“He’s dead; you do know that, right? Sitting here isn’t going to bring him back. Plus, I don’t really have the time for this,” she said as she walked up behind me.
I turned my head, my eyes wide. How could someone be so callous?
“He was a great king and I was very happy when he prayed to me every day, but the lives of mortals are fleeting,” she said, looking at his tombstone.
“How can you say that to me? I would rather die than be without him!” I screamed.
“That,” she said, “can be easily arranged.”
I felt a hard punch from behind; all my air escaped me. I looked down at my stomach and could see a large blade sticking out of me. My blood stained my dress. I gasped and fell to the ground, my blood warming my cold body. I could see the woman’s face over me as she shook her head. I reached to touch her face, but I began to see black…