The Fated Series is available for FREE on Kindle Unlimited! 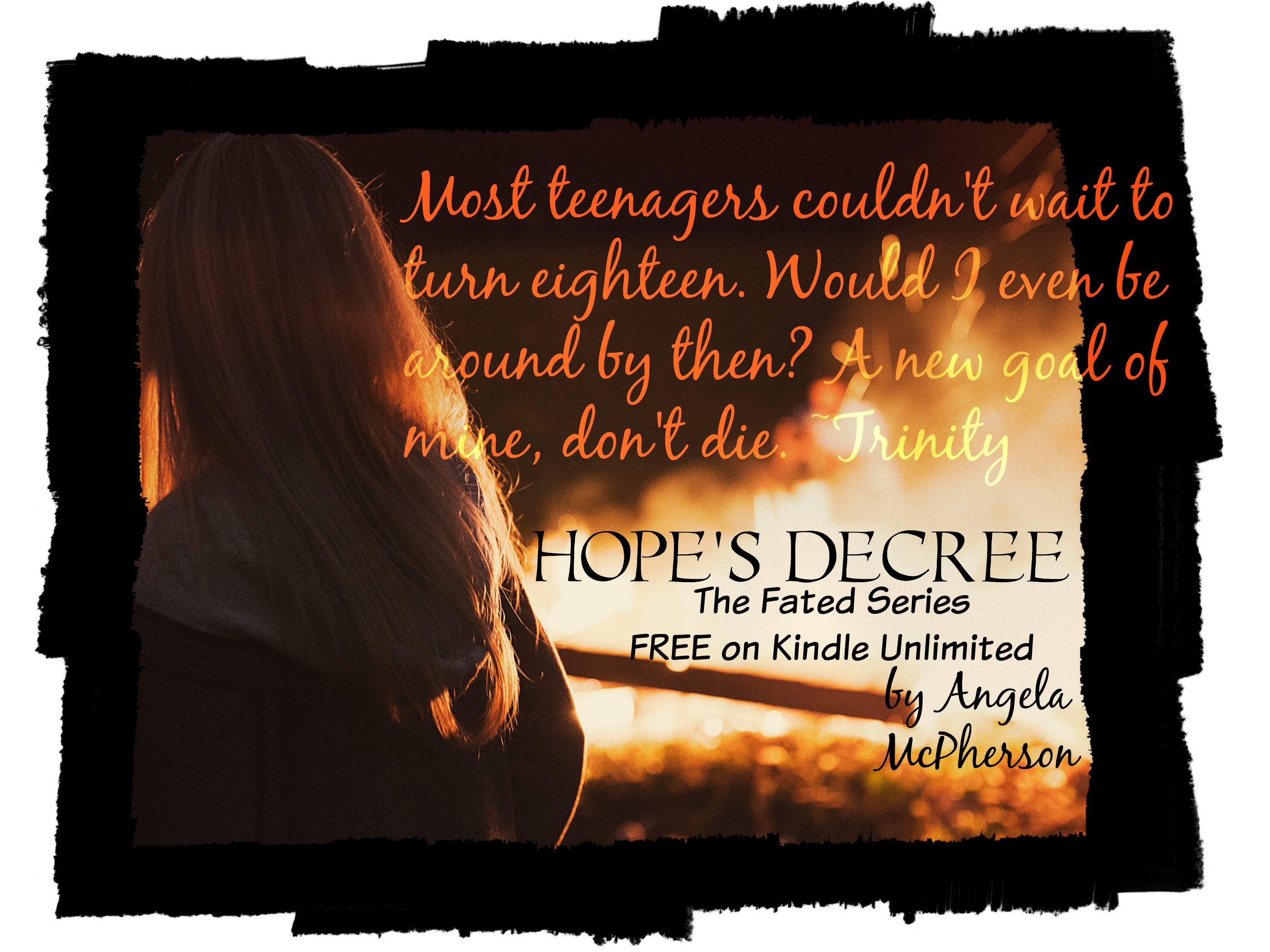 When everything else is lost, there is always hope.
While most teens want an epic senior year, Trinity Whitebone hoped for a normal one. Being seventeen was hard enough. Having the emotions of everyone around you in your head made life more than a little difficult.

He screamed hot-god in jeans with just his walk. His intense stare warmed her skin like a thousand suns. Unfortunately, his interest in her seemed to run from blazing to freezing in the span of moments and left her nothing but confused. She could deal with things not being normal, but when life goes from strange to dangerous…

Trinity is the direct descendant of Pandora and fated to rectify the terrors released into the world by her curious ancestor. With powers she didn’t know existed and abilities she never wanted, Trinity tries to walk away from everything her life had become. She thought she could turn her back on her fate until a band of rogue immortals discover who she is and will do whatever it takes to control her powers. Trinity is left with one decision…Embrace fate or die trying.

A few feet away, a man appeared, though he looked more or less the same age as me. Tall, well built with chestnut hair stopping at the hard angle of his jaw, and his eyes as black as a raven's feather. He didn't look like the same person from my nightmares. Not that it mattered–his presence still terrified me.

His lips twisted into a sinister grin, a mixture of evil and pain so clear I could taste it on my tongue. I tried to ease my panic and think clearly, but just like in my nightmares, I was losing.

"Who are you and what do you want?" Much to my surprise, my voice stayed even.

"You don't know, do you?" He tilted his head to the side, watching me with amusement in his dark eyes. He slowly held a finger in the air and then began making circular movements. The motion created his own personal whirlwind, lifting the hair around his face.

He continued to walk toward me, controlling the wind with his finger. My panic increased; my insides felt like they were being stretched thin, ready to snap in half at any given second.

"What do you want?" This time my voice quivered at the end.

"You have got to be kidding me, right?" He shook his head. "This is easier than I thought it'd be." He must have read the perplexed look on my face because he started laughing–hard. I would've been offended had I not been so freaking scared.

His thoughts and emotions become stronger with each step he took, overpowering my ability to shut off the inner darkness wanting to be set free. I wasn’t sure which way was up or down, left or right, and it didn't matter. 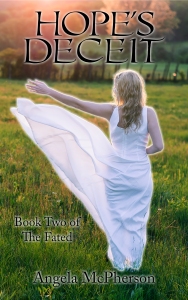 Everything has changed—people, my life-no one and nothing is as it seems. With each new threat, the idea of normal slips farther beyond my reach.

A relationship with Blain is everything Trinity had ever wished for-even before she realized she wanted it, but after the near fatal attack with Melia, something changes. The connection that binds them shifts and a dark force threatens to wedge the two apart. Trinity's only hope for the life she craves is stopping Melia and her Immortal Rogues.

But fate always has an ulterior plan.

As Trinity's eighteenth birthday draws near, more abilities manifest. But controlling them is a problem. During an emergency Watcher meeting, some question if Trinity is strong enough to carry out the task she is fated to uphold.

Secrets are revealed, and lives are lost.Melia has plans to awaken an ancient god whose wrath-if released-is sure to create more devastation thanPandora.As new threats surface, fear spreads.Fighting to keep the people Trinity cares for safe may be more than she can handle.

In the end, light may not be enough to outshine the darkness.

Waking up every morning to Blain and his skillful, mind-blowing kisses definitely made starting the day easier. Those lips of his had a way of making me forget the outside world. His clean cotton and fresh-out-of-the-shower scent clung to him like static, and I couldn't get enough. The feeling of comfort and safety while wrapped in his arms enveloped me, and the terrible images that startled me awake earlier faded away.

Melia being a Rogue and nearly killing me was frightening. But seeing the black orb attack Blain was a whole new level of terrifying. He seemed okay, though. God, I hoped he was okay.

Blain inched back, definitely far enough to see redness spread across my face, and grinned. His stare, the desire and need held there, made my pulse race. "God, you're beautiful," he said, stroking a thumb across my cheek.

His tender touch burned through me. The familiar buzz danced along my skin, and the colors from our power–white and gold– followed the sweet caress.

"This is my favorite part, the pink across your cheeks and knowing I put it there."

I smiled. "Mine is definitely your lips."

In turn, they kicked up in a sinful smile. The single butterfly in my stomach multiplied into a swarm. The clear blue in his eyes darkened, and he brought his mouth over mine.

Blain's kiss started nice and slow. His hand slid down my side, finding the edge of my shirt, along with a bundle of feelings I shouldn't be exploring just yet.

My heart thudded in a staccato-style rhythm. More heat rushed over my skin like a furnace.

I didn't want to stop. Didn't want to think about what Melia's next move may be. Silently, I wished that her army of Rogues, and all the other obstacles in our way, would disappear.

We'd almost lost each other during the near-fatal fight with Melia. Death gave a person a sense of perspective, and living in the moment, with Blain, was the only place I wanted to be.

"Stop worrying," Blain said against my lips, then pulled away. "Right now is about me making up for being a jerk, and for not doing more of this sooner."

I wanted to let it go. So bad, but the spinning wheel of thoughts in my brain refused to slow down. "What if Melia sends her Rogues after us? We should probably get a few workouts in, so I'm better prepared." A spike of terror tugged at my insides.

"You're right, we need to get you better prepared. But first I need to do a full body inspection. Make sure all your parts are workable," he said, pressing his lower half into me.

Before I could reply, he skimmed his tongue across my lower lip, dissolving whatever smartass comment was about to come out.

I granted him access, and the worry of Melia's attack faded. A clear image of Blain filtered in–the sexy, lone-dimpled grin he'd given me over a dozen times. Private moments between us were few. Losing myself with Blain… his touch, his lips, his everything, turned my bones to mush.

If only the bliss could've lasted longer.

Angela McPherson
Born and currently residing in Midland, Texas, Angela shuffles three active children (not including her husband) all over the place. She works in a busy pediatric doctor's office as a nurse during the day and writes at night. She is addicted to coffee–who isn’t? And firmly believes chocolate can fix all–especially chocolate ice cream. She laughs a lot, often at herself and is willing to try anything once (she thinks). When Angela isn’t rushing kids around, working or writing, she’s reading. Other than life experience, Angela turns to a wide variety of music to help spark her creative juices. She loves to dance and sing though her kids often beg her not to.