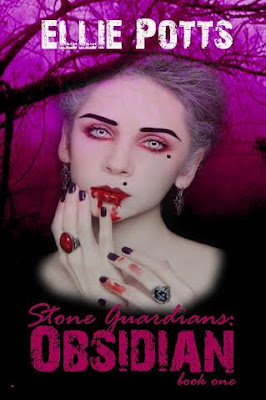 Blurb:
This is a different take on the vampire mythos.


Long before man there were Stone Guardians, a race of immortal warriors who sat beside Goddess. Isobel is different, she is an illegal bound servant. Not human or Guardian, she is vampire. Last of her kind, kept hidden by her Guardian master Vilem of the Obsidian Clan. Youngest son to Ivy who is responsible for the uprising that tore the Stone Guardians into two factions. One who still worship the Goddess, and the other who defies her.


Isobel has seen a lot throughout her many years with Vilem. She has learned with great minds, taught by teachers who live in history books. But she is truly happy when she sings. Now she is the head singer of the local rock band À La Mode. Her band consist of her closest friends, who are fourth generation Guardians. As uninvited visitors show up and threaten Isobel’s life. She has to play the good little Guardian while her world unwinds.

Ellie Potts is a self-published multi-genre writer. She loves everything nerdy like dressing for pirate and renaissance faires, Steampunk, playing video games, planning to survive a zombie apocalypse, being a Whovian, Browncoat, Star Wars addict, and collector of arcane knowledge. She grew up in Merced County where most of her stories and books take place. She now lives in Tulare County with her husband, an attack Bugg, Darth Turtle, two spoiled goats, and a bunch of creepy chickens.