#NewRelease - The Stone Queen by @Lee_Bross

A fairy realm on the verge of ruin.

THE STONE QUEEN is the tale of a girl who has spent her life trying to forget who she is—and the kingdom that will die if she succeeds.

A thousand years ago the only surviving heir to Alcaria disappeared and the throne stood empty. Over time, the entire kingdom succumbed to The Sleep of Stone, the silent death of a leaderless faery realm. On the verge of Midsummer's Eve, time is up and Alcaria can be claimed by any with royal blood, Light or Dark.

Eighteen-year-old Merci lives a meaningless existence in the Bronx. Expelled from school, she spends her days dodging her prostitute mother and chasing her next high. As long as it dulls the pain and makes the shadows that follow her disappear, she doesn’t care how or where she gets it.

But her risky behavior is about to catapult her into a world unlike any she’s ever seen in her alcohol-fueled dreams. A tumble off a rooftop should end her life, but instead of falling to her death, she lands in the arms of a stone gargoyle come to life.

And that’s only the beginning.

When she’s attacked in the middle of Central Park, the same gargoyle comes to her rescue, but this time, he has a story to tell—one that changes everything she thought she knew about her life and who she really is.

That is, if she chooses to believe him and embrace the truth; That she was born to be a Queen. 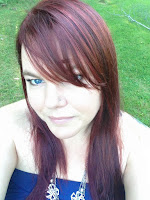 Most recently she has stepped into self publishing with THE STONE QUEEN, a YA fantasy novel that is the first book in a planned trilogy. L.E. Bross lives in Maine with her husband, sons and many four legged fur babies.

The car lights below crawled along like ants on their way to a midnight picnic.

I was the giant in my own surreal fairytale, ready to stomp down and squash them with my huge boot. I stretched my arms out and shouted into the night. “Fee, Fi, Fo, Fum.” My foot slipped off the ledge and giddy laughter bubbled from my throat. I barely managed to keep from tumbling over the side. A tiny blip of fear cut through the fog of alcohol in my head.,

I looked over my shoulder and winked at Torin to dispel the thick nothingness that was always present in my gut. Being this close to the edge always made my thoughts heavier.

Sometimes it took all my will to step back and not forward.

“Get away from the edge, Mer.”

Torin's gravel-filled voice washed over my bare arms and I shivered in pleasure. He was the only good thing in my life. Without him...

“Would you even miss me if I was gone?” I hated the neediness that crept into my voice. I stopped relying on other people a long time ago, but Torin had found a way under the armor I wore. Now I cared, and some days I hated him for it.

He lit a joint and leaned back against an old rusted roof vent. His black leather jacket pulled tight across his arms as he squinted at me through the smoke. I could feel his gaze moving up and down my body and I loved the thrill it gave me.

Satisfied for the moment, I jumped. My boots thudded when they hit the roof and I sauntered over to the makeshift table we set up. A board across a couple of milk crates was all we needed. Torin watched me, his eyes half closed. I already knew what he wanted. That look on his face said it all.

I wasn't sure if I was going to give it to him or not. I'd been in a weird headspace all day and even though we were celebrating, a part of me just wanted to be alone. I leaned down and grabbed the almost empty bottle of bottom shelf whiskey and straightened.

“To forgetting,” I shouted and tipped the bottle back, guzzling until it was empty. I threw my arms wide and laughter poured from my throat. The bottle clunked at my feet. It didn't matter how I'd gotten to this point anymore. The alcohol kept the shadows away, and that's all I cared about.

The roof spun in crazy circles around me, whizzing by like some twisted carousel ride, making me lose my balance and stagger sideways. The laugh that burst free was anything but joyful.

To tuck away and take out when I needed the reminder that life wasn't all dark shadows and despair.

With a loud sigh, I stepped out of his embrace and dropped into a rickety old lawn chair.

“Not now, I just want to enjoy this.” I waved my hand upwards.

“Babe seriously? I thought we were celebrating?” He stepped behind me and brushed his fingers over the back of my hair. God, it felt good to be touched. I closed my eyes and lost myself in the sensation. He was the only person I let do this. The only person I let close enough to.

“Maybe later, 'kay?” I reached behind me to run the back of my fingers along his rock-hard stomach. He sucked in a breath and pressed my hand lower, to an even harder part of him. My stomach clenched and my pulse sped up. Maybe it wouldn't hurt to strip him down and let him make me forget about the noise in my head for a while.

But the respite was always temporary.

Even with the bottle of whiskey sitting in my guts I knew I couldn't escape it. I hated the darkness that was always around the edges. It felt like the shadows watched, waited for me to give up.

All of a sudden, the weight of the city air settled over me so thick that breathing felt more like drowning.

“I just want to be alone for a little while. Later?”

Torin sighed and brushed his lips over the top of my head. “This was supposed to be your birthday celebration, Mer. You sure?”

I was eighteen today. It seemed like it should be an important milestone, but all it did was remind me that nothing had changed. Another year gone. Time moved faster, speeding toward a giant black void. That scared the hell out of me. Now what danced through my head in a constant chant.