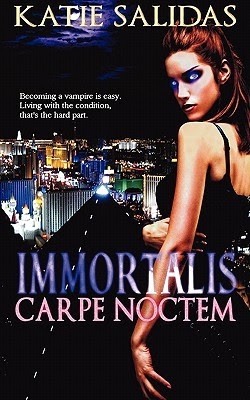 
Title:  Immortalis Carpe Noctem
Author:  Katie Salidas
Series:  Immortalis (Book 1)
Genre: Paranormal Romance/Vampires/Urban Fantasy
Publisher:  Rising Sign Books
Release Date:   January 1 2012
Blurb/Synopsis:
Explore the emotional upheaval that is the transformation from human to vampire. Bleeding to death after brutal mugging on the campus of UNLV, Twenty-five year old Alyssa, is rescued by the cold and aloof, vampire, Lysander. Taking pity on her, he shares the gift-and curse-of immortality. She awakens as a vampire and is soon devastated by harsh realities of her new way of life: An unyielding thirst for blood as well as the loss of her friends, her independence, and her humanity. As if having her humanity stripped away was not enough to make life interesting, Alyssa finds out her "turning," did not go unnoticed by the rest of undead society. Old enemies; an ancient sect of vampire hunters, known as the Acta Sanctorum, as well as a powerful Vampire mistress, each set plans in motion to destroy both Alyssa and Lysander. Only by accepting her new-found immortality, seizing the night, will Alyssa hope to survive. She and Lysander must fight together against two sets of enemies bent on destroying them both. 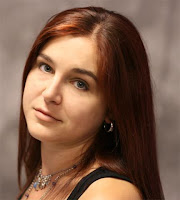 Katie Salidas is a Super Woman! Endowed with special powers and abilities, beyond those of mortal women, She can get the munchkins off to gymnastics, cheerleading, Girl Scouts, and swim lessons.  She can put hot food on the table for dinner while assisting with homework, baths, and bedtime… And, she still finds the time to keep the hubby happy (nudge nudge wink wink). She can do all of this and still have time to write.
And if you can believe all of those lies, there is some beautiful swamp land in Florida for sale…
Katie Salidas resides in Las Vegas, Nevada. Mother, wife, and author, she does try to do it all, often causing sleep deprivation and many nights passed out at the computer. Writing books is her passion, and she hopes that her passion will bring you hours of entertainment. 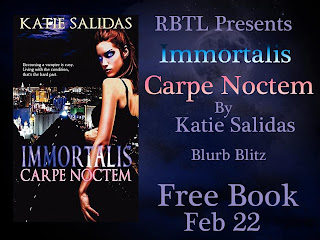