Book Name: Games of Fire
Author: Airicka Phoenix
Publisher: Airicka Phoenix
Release date: Feb 14, 2013
Genre: Young Adult Thriller and mystery with a strong dose of romance.
Warnings: Strong language and mild sexual content
Formats: ebook & paperback
Other Novels: :
~ www.amazon.com/Touching-Smoke-Touch-Series-ebook/dp/B008RB72NW”>Touching Smoke (Touch Series, book 1) ebook
~ http://www.amazon.com/Touching-Eternity-Touch-Series-ebook/dp/B00AQQDVTU/ref=pd_rhf_gw_p_t_1>Touching Eternity (Touch Series Beginning) ebook
~ http://www.lulu.com/shop/airicka-phoenix/touching-smoke/paperback/product-20538011.html> Touching Smoke (Touch Series, Book 1) Paperback
~ http://www.lulu.com/shop/airicka-phoenix/touching-eternity/paperback/product-20658950.html>Touching Eternity (Touch Series Beginning) Paperback
~ http://www.amazon.com/Whispered-Beginnings-Fiction-Writers-Anthology/dp/1617521221> Whispered Beginnings: A Clever Fiction Anthology (ebook)
~ www.amazon.com/Whispered-Beginnings-Fiction-Writers-Anthology/dp/1617521221”>Whispered Beginnings: A Clever Fiction Anthology (Paperback)
~ http://www.amazon.com/Midnight-Surrender-Paranormal-Anthology-ebook/dp/B009M9EMT0/ref=tmm_kin_title_0> Midnight Surrender Anthology (ebook)
~ www.amazon.com/Midnight-Surrender-Paranormal-Romance-Anthology/dp/1479327441”>Midnight Surrender Anthology (Paperback)
Social Networks:
~ https://twitter.com/#!/AirickaPhoenix">Twitter (@AirickaPhoenix)
~ Facebook
~ Design Page
~ http://www.goodreads.com/AirickaPhoenix">GoodRead
~ http://pinterest.com/airickaphoenix/”>Pinsterest
~ Author Site
Games of Fire Synopsis
Sophie has enough problems in her life without Spencer turning her blood to fire, without his eyes freezing and burning her, without his hatred of her. Since his migration into the house next to hers, Sophia Valdez isn’t sure whether she wants to toss him under a bus or kiss that smirking mouth of his. But even as the temperature rises around them, leaping flames of passion, want and desire,everything either has ever known will be shattered by the lurking shadow hounding their every step, wanting revenge.

Airicka Phoenix is the best-selling author of the Touch Series with short stories in Whispered Beginnings: A Clever Fiction Anthology and Midnight Surrender Anthology. When she's not hammering away at the keyboard, she can be found banishing pirates or crawling through the attic looking for lost treasure with her kids. She loves baking, gardening and reading. She also likes to travel and take pictures of everything she comes across. When asked, Airicka describes herself as a sarcastic basket case that has an unhealthy addiction to chocolate, old movies and really bad jokes. She loves to laugh, make friends and write. If she could have one wish granted, it would be to spend one day as a fly-on-the-wall inside Stephen King's mind. If she could have two wishes granted, she would ask for a castle dedicated entirely to her overwhelming collection of books.

For more about Airicka, also on how to win giveaways, read author interviews and reviews, visit her website at: http://airickaphoenix.com/Author/?cat=10 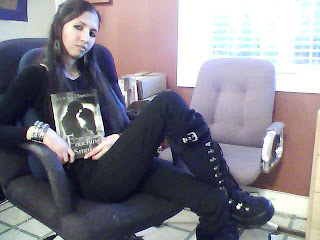 “I won’t bite,” he said, probably meaning it as a joke.

“Oh if only that were my only problem,” she sighed under her breath.

She shook her head. “Nothing.”

She took his hand, slipping her icy fingers through his. The electric sparks tore a fiery path down the length of her arms, nearly melting the ice beneath their feet. She shivered involuntarily and felt his fingers flex.

“All right?” Had his voice always been so husky?

She dampened her lips. “Yeah…” The single word died in her throat as she was pulled towards him. Her heart tripped. Her lungs stilled. The heat of his body rushed over her with the subtle scent peppermint, leather, spices and smoke.

A soft mist blew around them. Raindrops glistened in his hair, shimmering under the pale glow of the light post. His eyes were shadowed beneath wispy fringes, but the silver in them glinted like pools of liquid mercury. Her breath caught. It must have made a sound because his fingers tightened. His shaky exhale caressed her flushed face.

“This,” he whispered so quietly she almost didn’t hear him. “Is why you are so bad for me.”