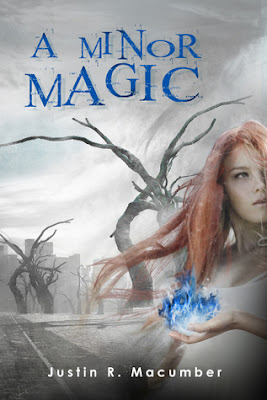 Synopsis -
Over the course of a single night, mystical fires tore through the sky and reduced most of Earth to ash. Ten years later magical fire burns again, but this time it’s in the hands of a young girl named Skylar. Exiled from her adoptive home, Skylar must now struggle through ruined lands and religious zealots who believe she’s an agent of the Devil. An even greater threat exists in the form of shadowy sorcerers from another world who covet her blood. Along her journey, she meets a motley band of outcasts who not only know the secret of what happened to Earth, but also of Skylar’s true origin. Will Skylar be able to accept this fantastical truth? But more importantly, can her powers and raging heart be tamed in time to stop those who once burned the world and now seek total domination? 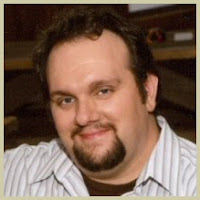 Justin R. Macumber is the author of HAYWIRE and A MINOR MAGIC. When not hard at work on his next story he hosts the popular Dead Robots' Society podcast, which is a podcast made by writers for writers. He and his lovely wife live in the Dallas/Fort Worth metroplex along with a rampaging pack of dogs and cats that they think of as their  children. He is also a co-host on The Hollywood Outsider, a weekly podcast about movies and television. Currently he is working on two novels - the horror story STILL WATER, and the sequel to A MINOR MAGIC entitled A BROKEN MAGIC.

Skylar's eyes filled with a flickering blue light as ghostly flames jetted from her palms, and her screams were lost over the roaring of the blaze. Instinctively, she shook her hands, slapped them against her legs, and then clapped them together to try and extinguish the fire. As her hands touched, the flames vanished. To her astonishment her skin wasn't burned. It wasn't even warm. Sadly, the same couldn't be said for Buster. The dog was a smoking ruin at her feet, one more pile of burnt remains in a world already covered in ash. Her heart broke as she stared down at him. Oh god, she thought. What's happened? What have I done?
"Oh my Lord, girl," a man said behind her. "What did you do?"
Skylar whirled around, her eyes widening in guilt even though she didn't understand what had happened, or how. "Henry, he jumped at me! I don't know why he did it, and I tried to stop him, but..." She fell silent, her thoughts too scrambled to know what more to say. Buster was a dog she'd loved and cared for ever since coming to live on the farm years ago, and without warning, he had attacked her. When she'd held her hands up to ward him off, blue fire had erupted from them and consumed him as though it was a living, ravenous thing. Nothing like that had ever happened to her before, and she couldn't rightly explain what she didn't understand.