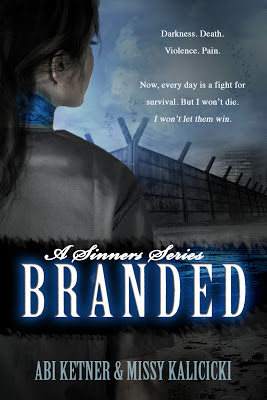 Book Description:
Twenty years ago the Commander came into power and murdered all who opposed him. In his warped mind, the seven deadly sins were the downfall of society. He created the Hole where sinners are branded according to their sins and might survive a few years. At best.
Now LUST wraps around my neck like blue fingers strangling me. I’ve been accused of a crime I didn’t commit and now the Hole is my new home.

Now every day is a fight for survival. But I won’t die. I won’t let them win.
The Hole can’t keep me. The Hole can’t break me.
I am more than my brand. I’m a fighter.
My name is Lexi Hamilton, and this is my story.

I read the first chapter of Branded before it was released and was immediately hooked. Now that I have read the rest, I know all the excerpts that I have read did not do this book justice. Once I began to read Branded I couldn't stop, Abi and Missy had captivated me like no author had before, especially with a Dystopian novel. I don't read Dystopian because the don't normally hold my interest that wasn't so with this one. There was always so much excitement with each new chapter, there was drama and twists around every bend. I loved it. The characters were amazing and written with complete detail. I have to admit some of the detail had me cringing in my seat but not to the point it turned me away. Although I would normally go after the hot character as being my fave in the book and I must say Cole will definitely go down on my top ten Book Boyfriends, my favorite character in this story was Alyssa, her character really touched my heart, the tears I shed for this book was more for her than anyone else. I loved how fierce Lexi became as the story went on, even though she had nothing to live for and had lost everything already she was determined to keep fighting, her bond with Cole just strengthen the determination she already had.

I didn't realize how true my word were when I told Abi and Missy that Branded was the most sought after Dystopian, Indie written book of 2013 until after reading it. Now that I know what everyone was so hyped up about I can't wait to read more of what's to come from this duo. Their writing style is one that I could read forever. I just know this series is going to be EPIC!

Abi Ketner Is a registered nurse with a passion for novels, the beaches of St. John, and her Philadelphia Phillies. A talented singer, Abi loves to go running and spend lots of time with her family. She currently resides in Lancaster, Pennsylvania with her husband, triplet daughters and two very spoiled dogs.

Melissa Kalicicki received her bachelor’s degree from Millersville University in 2003. She married, had two boys and currently lives in Lancaster, Pennsylvania. Aside from reading and writing, her interests include running and mixed martial arts. She also remains an avid Cleveland sports fan.

Abi and Missy met in the summer of 1999 at college orientation and have been best friends ever since. After college, they added jobs, husbands and kids to their lives, but they still found time for their friendship. Instead of hanging out on weekends, they went to dinner once a month and reviewed books. What started out as an enjoyable hobby has now become an incredible adventure. 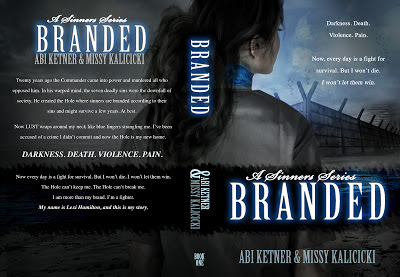