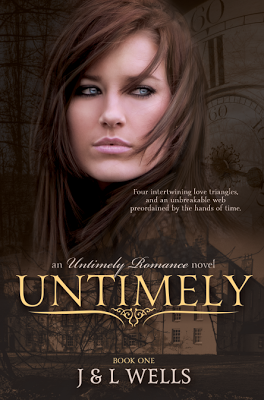 Synopsis:
Heather Richardson is a seventeen-year-old British girl whose life quickly becomes an emotional roller coaster when she meets Ruben Brown, a controlling twenty-four-year-old man who works for her father at Freesdon Manor. As much as Heather wants to love Ruben, the cracks in their relationship begin to show as her eighteenth birthday draws nigh.

In a surprising turn of events Heather is confronted by Frank, an intriguing man from a past that dates back to the nineteenth century. His untimely presence changes everything.

When she’s thrown back in time by an unrelenting force, Heather realizes that her life is not what it appears to be. Her future has already been written, and it seems she cannot escape her fate, a fate determined by a love lost long ago. In her struggle to find herself, Heather must chose her destiny amidst a dangerous love triangle, vengeful lovers, and passions controlled by the hands of time.

About J & L Wells: J & L Wells is a UK based mother daughter team, consisting of Laura and her mother Judith. Together, they write compelling fiction and are currently working on book 2 of the Untimely Romance series.
Author Links
http://www.goodreads.com/book/show/17832082-untimely
http://fantasy-author1.blogspot.co.uk/
https://www.facebook.com/AnUntimelyRomance?ref=hl