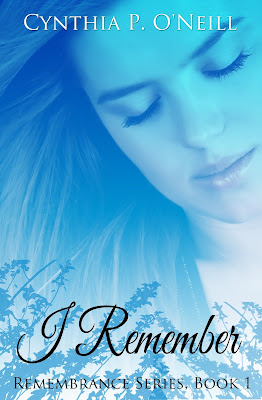 I Remember blurb for the cover:
Jordan Carlisle is a young, career driven woman with a passion for life and family.  Her world is suddenly altered by both death and love when she is torn between family loyalty and a chance at happiness with the man who holds her in her dreams.  Will time and technology bring her and the handsome stranger together or will the powerful forces that have plagued her since childhood keep them apart?
Gregory Riley has kept a secret most of his life to avoid discovery.  Now he is on a quest to find the person who can change his life, forever.  He knows her face, her touch and her voice; but nothing more.  He uses clues, from his dreams, to find both her and a timeless love that defies explanation.  In spite of the darkness working to keep them apart, can he get to her first and help her “remember”?
Jordan and Gregory discover a deep connection in the ability to encroach on one another’s dreams of both past and present. Together, they learn that their lives have crossed time and time again, only to end tragically.  Guided by an unearthly visionary and help from those who have gone before, they are given clues and revelations to uncover their place in history.  In order to stay together, they must discover where fate went astray, who is responsible and where they fit in to the ancient prophesy.  Working side-by-side, they seek to unlock the hidden powers and mysteries that will defeat the darkness in this life and allow them to be together, forever.  Will love finally prevail or will the darkness win again? 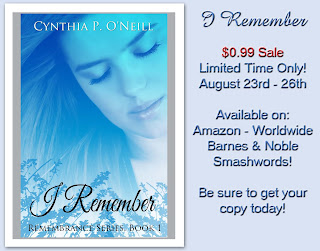 I wandered along a path as the sun began to set across the horizon, lighting the sky with deep hues of orange, purple and pinks.  I didn’t know where I was, but the countryside was simply breathtaking.
“Angeline, where are you?”  A familiar male voice called out.
“Come find me, Daniel,” she announced playfully, in the distance.
Finding no one else around, I decided to head their way to ask for directions.
“Where are you hiding, my love?  You know I will find you; and when I do, I will smother you with kisses,” he responded, full of laughter.
Their voices led me to a beautiful meadow filled with spring flowers and the sound of a river in the distance.  They were dressed in Victorian fare, running playfully until Daniel caught the girl who must have been Angeline. They fell to the ground together, laughing, near a tall tree.
As I walked toward them, I watched Daniel lean in to kiss Angeline softly on the lips, her hands circling around his neck and pulling him closer.  I stopped in my tracks feeling like I had invaded a private moment, but I still needed directions in order to return home.
“Excuse me, I don’t mean to intrude but I could really use your help,” I stated softly, so not alarm them.
They continued, without even a glance my way.   How rude.  I cleared my throat loudly and spoke again, but no answer.
I was frustrated.  How could they not hear me?
Suddenly, the landscape began to twist and shift into something dark and evil.  I tried to turn and run but found myself unable to move.  My heart began beating erratically as fear set in.
A tall figure appeared before me with ghostly shadows swirling and moaning around it.  It was dressed in the darkest cloak I’d ever seen, with the hood draped in such a way as to cast shadows across the few visible areas of the face, making it impossible to see who or what it was.
An arm rose revealing long willowy fingers, aged and deformed and pointed at me.  A sadistic female voice bellowed, “I warn you.  Do not seek him out!  The prophecy must not come to pass.  If you defy me, I will make your life a living hell, taking all that you hold dear.”
That’s when the figure’s head tilted up and her glowing red eyes locked onto mine, sending a chill down my spine.  Then the shadows began to swirl around my body, suffocating me.
“STOP!”  The scream came from nowhere, catching me by surprise.
“LEAVE HER ALONE!”  This time I recognized a man’s voice.
One of the shadows grabbed my arm and a piercing, “NOOOO” sounded, from deep within my chest, echoing off all that was around me.
My eyes shot open, as I bolted upright in bed.  I looked around and realized I was in my bedroom.
I reached for the light. Turning it on, I tried to catch my breath.  My only thought was that the dreams were back and they were worse.  I’d seen a witch spirit previously, but not to this extent.
Wrapping my arms around my chest to calm myself, I felt a sharp pain on my right arm.  I looked down to see the reddened hand print, where the dark shadow had grabbed me, slowly fading from existence.  What the heck?