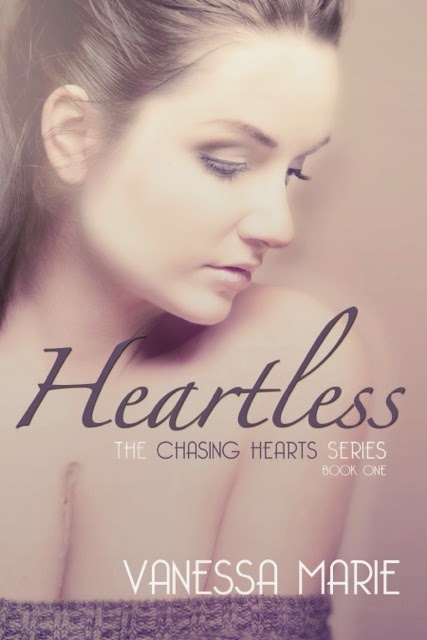 Synopsis: (Revamped)
Where other girls had childhoods full of Girl scouts, parties and sleepovers.
Charlie Evans’ early life was full of hospitals, surgeries and the fight to survive.
Forced to grow up quickly, she learned not to let anyone in.
What was the point? People always let her down.

But Fate always has a sense of humor.
After one chance meeting...then two...then three...
Sam Greyson changed everything. He broke down the walls she’d built around herself and forced his way into her heart.
She finally let someone see the real, bruised, damaged girl inside.

Then suddenly everything came crashing down.

Will Charlie deny her own happiness to protect everything he had worked for?
If giving him up meant he could have a normal life…


She would do it in a broken heartbeat. 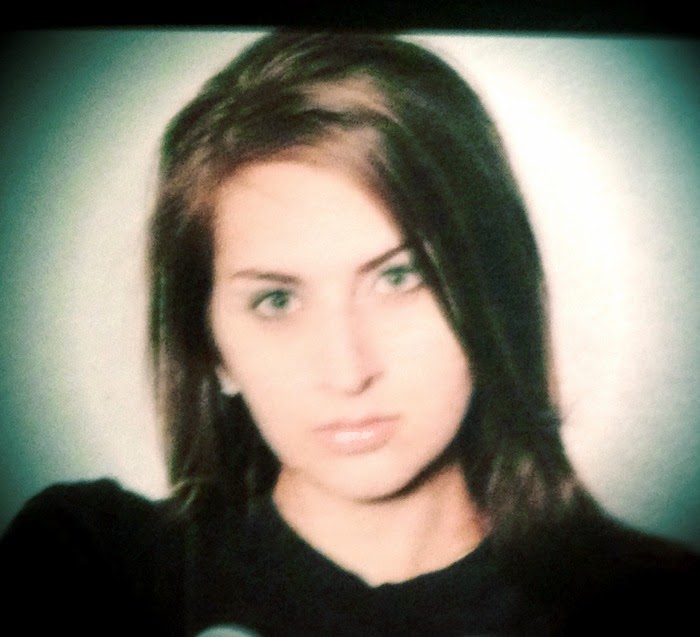 Always the cause of shenanigans, Vanessa is a heavily tattooed, sarcastic motorcycle enthusiast who started her career as a Jeep tech at the age of sixteen. The happily married mother of three little monsters—oops, children—lives in Kentucky by way of Las Vegas, Nevada. Once her life took a different direction—sidelined by Heart Disease at 26 and becoming a pacemaker recipient—she decided to write as a creative outlet, and Heartless was born. She realizes life can be dark clouds and acid rain at times, but her outlook on life puts a positive and sarcastic spin on it all.

Charlie closed the gap between them and pressed her lips against his. It seemed to be the only cue he needed. He wrapped his arms around her and pulled her against him as her towel fell to the floor. She parted his lips with her tongue and lost herself in their kiss.
Her bathing suit was cold and wet against his bare chest, but she didn’t care as she ran her 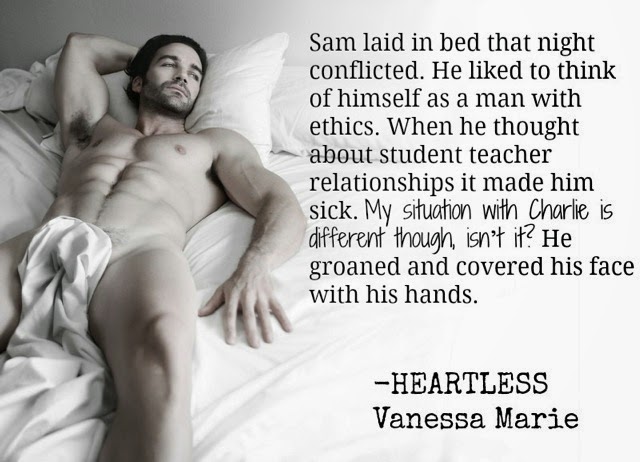 hands up into his hair. He broke away from her lips and kissed her down her jaw line to her neck.

A shiver vibrated through her and she wasn’t sure if it was because she was cold, or if it was from his touch.
She knew they shouldn’t be doing what they were and needed to wait until she was no longer his student, but she pushed the thought out of her mind. He pulled away and cupped her face with both hands. Not wanting it to end, she slowly opened her eyes and watched him.
“We can’t do this,” he said, as he breathed heavily.
“I know,” she whispered and reached behind her back. She pulled on one of the strings, her top came untied. He reached back and grabbed the strings and tied them back into a bow behind her.
Dumbfounded, she pushed against him. “What are you doing?”
“Stopping this…”
“You are the captain of mixed signals, you know that?” She picked up her towel and wrapped it around herself.
“Me? You’re the one telling me you’re better off alone one minute and then taking your clothes off the next.”
“Seriously? You know what. You can go fuck yourself.” She scowled and turned for the door.
He stepped in front of her. “I didn’t mean it like that. I love you, and I want to be with you but we can’t do this here.” He motioned around them.
“What does it matter? We had sex at your house after we found out, did we not?” She crossed her arms over her chest and shifted her weight to one leg.
“That was in the privacy of my own home, on our time. Not on the school’s senior trip where I’m assigned to be your Goddamn chaperone, Charlie. Please don’t make this harder on me than it already is.”
“It was a mistake coming here anyway. Sorry I came.” She turned on her heel and walked out his door into the hallway.
The second she was out in the open her stomach fluttered and she prayed no one would see her coming out of his room, in the middle of the night, in her bathing suit.