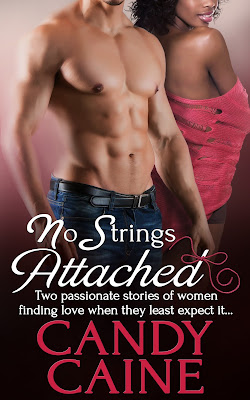 Two passionate stories of women finding love when they least expect it...

Never is Not Forever

Claudia Brown has the perfect life, full of all the trappings of success. She has put herself through school and has worked hard to become the youngest English department chairperson at a prestigious ivy-league university. One trap she swears to avoid is marriage—a sure-fire way to constrain her career. Besides, she likes playing the field. But when Claudia realizes her biological clock is a ticking time bomb, she decides to have a baby—minus the attachment of the father. After a meticulous search she finds the perfect specimen: Robert Sterling, a smart, sexy, fellow professor. But she doesn’t factor in the one thing that can derail her entire campaign—falling in love with the sperm donor!

When Jade Green meets successful trial lawyer, Charles Trotter, she finds herself relaxing in the warmth of his smiles and his off-beat humor. Best of all, even though he is a blue-eyed hunk, she thinks of him only as a great guy to hang with—no drama, no intimacy, no possibility of shattered dreams. And wonder of wonders, he seems to feel exactly the same way! When Charles Totter meets Jade Green, he thinks she is a walking wet dream. As he gets to know her better, he finds he also enjoys her company and her quirky sense of humor. Now if he can only find a way to get her into his bed!

Never is Not Forever


Robert took another sip of his drink. In the background the music throbbed sensually. “I’ve been alone most of my life. My parents died when I was an infant and an aunt raised me until she died when I was fourteen. Then I was placed in a foster home until I was eighteen. I’ve always been afraid to get close to anyone for fear they’d leave me—or so says a psychologist friend of mine.” He grimaced wryly.

Claudia thought he was sounding more and more like the perfect candidate to be the father of her baby. “I never had much of a family life, either,” she admitted.  At least that was the truth.

As they continued to talk, Claudia found herself becoming more interested in him as a person, nearly forgetting why she had lured him there in the first place. Then the moment happened. He put down his glass and removed his glasses revealing the most beautiful teal-colored eyes she’d ever seen on a man. Before that thought had been completely translated by her brain, his lips were covering hers.

It was a gentle kiss, slow and thoughtful. In the background she could hear the sensual guitar music of Ottmar Liebert and marveled how much it fit the mood. Claudia liked how Robert’s mouth felt on hers and actually wanted more. Surprised at her reaction to the kiss, she realized she might not need a script, after all…

Despite the fact Jade knew she should end things with
Charles, it felt comfortable having breakfast with him. Worse, she could see
making a habit of it. After they finished he insisted on helping her clean up.
Standing next to him at the sink washing the dishes as he dried, she felt the
heat rising from his body. The scent of his after-shave was intoxicating and
going straight to her head. She wanted him to kiss her, but knew he wouldn't.
Not after the last time. So she did the unthinkable and kissed him.
“This is for breakfast and two more inches to my waistline,”
she said. “Thanks a lot."
He smacked his forehead and said, “I did it again, didn't I?
I'm going to become a Pavlovian response. You’re going to equate me with food.”
“It's a distinct possibility,” Jade replied as she playfully
punched his arm.
Charles gently took her face and held it between his large
hands. She looked into his eyes as they sought hers. She had to be blind not to
see the hope and longing there. “Are you going to run away this time?” he
asked, his deep voice resonating with emotion.

Whether she’s writing a short story or novel, Candy Caine will make her interracial romances hot and spicy. Always striving to entertain her readers, Candy tries to breathe life into her characters, making life often interesting for her husband, Robert back in their home on Long Island, NY. And both are trying to teach their fifteen-year old yellow Lab, Sammy, new tricks.

Candy loves to hear from her readers. You can reach her at candy@candycaine.com.