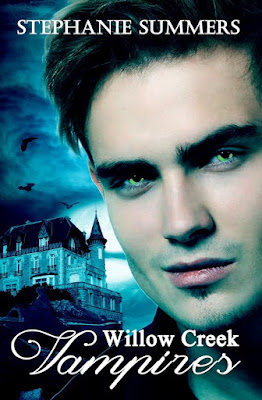 Blurb:
Welcome to Willow Creek, where life is simple, crime is practically nonexistent, and people are happy—unless you’re Sabine Crowley. On her eighteenth birthday, she receives word that she’s the latest offering in a two hundred year arrangement between the townspeople and the vampire lord who presides over the town. There goes her plan for traveling the world, moving away from Willow Creek, and pursuing her dreams. Now that she’s being sent to live with the vampires, she’s tied to the town and cocky newcomer Remy, the vampire she’s tasked to feed for the rest of her life.
The Willow Creek Vampires Series follows Sabine’s journey through finding out she’s the next offering, to falling in love, to doing everything she can to hold onto and save the love she never thought she’d find, all while searching for a way to freedom. 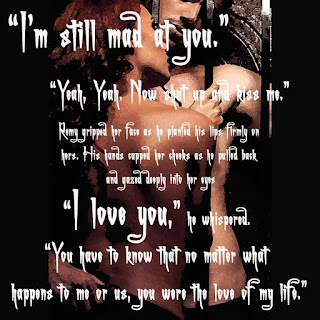 Stephanie Summers is a paranormal and contemporary romance author. She recently from West Virginia University with a degree in accounting, though writing is her true passion. Stephanie seemed to always have a story or two or ten running around in her mind. At the ripe old age of 30, she finally decided it was time to put aside the thought that she didn't have what it took to write a novel and began writing her first story.

She has since published her first paranormal series, The Willow Creek Vampires Series, with Craving (Book #1), Haunting (Book #2), and Awakening (Book #3) available now. Her short story, Love Forgotten, was chosen to be published in Stardust: A Futuristic Romance Collection, and another short story, Saved by the Bear, is available now. Her contemporary rock star romance, Take Me On, was released in July 2015, with its sequel, Take Me Home, scheduled to release later this year. 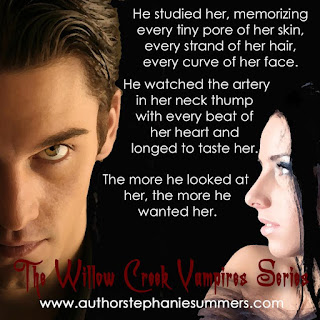 He stood looking out the window at nothing.
Not turning toward her, he spoke. “You were never in any real danger. You know that, right?”
“I get that, but that’s not what I’m having issues with… that’s not what scares me.”
“What is it then?”
“You.”
His body stiffened as he heard the fear in her voice. His head turned slightly in her direction.
“You scared me before, but I’m absolutely terrified of you now. You bit me when you said you wouldn’t, and I’ve never seen someone be as violent as you were. I’ve never seen someone die right in front of me, let alone witnessing such a violent death.”
“I didn’t bite you.” He continued looking out the window again, and his body relaxed.
“I saw my blood dripping off your teeth and running down your chin. Now you’re going to lie about it?”
“It wasn’t your blood. It was mine. I meant it when I said I wouldn’t feed on you in front of all them.”
“Oh… I saw the blood, and I thought,” she trailed off in mid-sentence. “I guess that’s why it didn’t hurt. I thought maybe you just made it so I didn’t feel it.”
“I wanted them to believe I was feeding from you, so I bit the inside of my lip. That’s why I kept my mouth on your neck for so long. I knew some of them were watching us. If I hadn’t pretended to feed on you, things could have turned sour fast, and it’s not like I could tell you my intentions without alerting everyone else.”
He turned to face her just as she reached up and placed her hand on the spot his mouth had been focused on. He saw lust flash briefly in her eyes. Though he would never admit it to her, he enjoyed being close to her. He planned to tease her about kissing her and sucking on her neck, and he was going to act like he was the pig she thought he was, but he would never tell her how much he enjoyed being so close to her. His lips ached to kiss her again.
“Then what was with killing that guy? All for a necklace?” Sabine shook her head and looked at him incredulously. “You could just buy another.”
He looked down at the floor. He couldn’t stand making eye contact with her while he revealed the story so close to his heart. “It isn’t just a necklace. It’s my mother’s, and later belonged to my wife. That necklace is the only item I possessed that belonged to either of them, and he stole it from me.”
“I didn’t realize you still had feelings like that. You made it seem like you don’t care about anything,” she said, moving to the side of the bed closest to him and sat down.
“I do care about a few things. I may put on a tough exterior, but some feelings linger.”
“So, it has sentimental value... couldn’t you just take it back? Did you have to kill him?”
“Yes, I did. Everything I owned as a human was stripped from me by my father when I refused him. I managed to hide the necklace in a place he never suspected, and I retrieved it later. So, you see, it wasn’t just that it was theirs, but it was the only thing I had left from my mortal life. The necklace was the last bit of myself that I could still hold on to.” 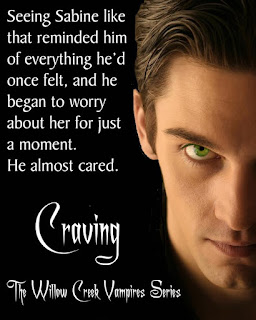 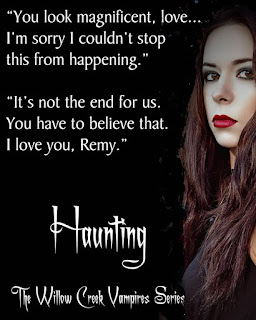 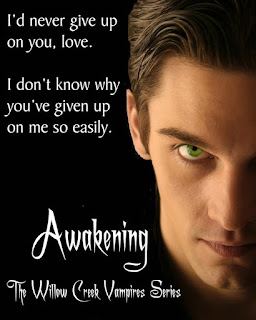