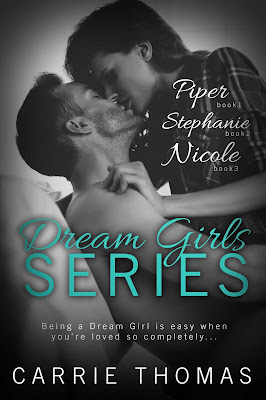 Blurb:
Follow best friends, Piper, Stephanie and Nicole on their journey into womanhood, falling in love, and a future they've all dreamed of. This is the complete series in a box set.
Dream Girls: Piper: Piper Allen is looking to spread her wings and unfortunately, her podunk hometown in Missouri is stunting her spiritual growth. Moving to Dallas to finish up college with her two friends, Stephanie and Nicole, she hopes to challenge herself to reach new heights. Her bohemian ways allow her to float through relationships frequently and with ease; when there are no strings attached, there is no chance of being hurt.

Texas rancher, Moye McKenzie, is a no nonsense, good ol' boy, who doesn't play games where matters of the heart are concerned. When this straight-shooter walks into Piper's life, sparks fly and tempers flare. Wanting to give her the life she deserves, Moye has to show her that getting hurt can happen whether you're holding onto the reins or not.

Dream Girls: Stephanie: Looking to take that first responsible step into adulthood, Stephanie Garner is working toward her college degree in secondary education while serving drinks at a bar to pay the bills. As an ex-gymnast and cheerleader, she might have guys falling at her feet, but she’s a firm believer in monogamy. Even though she has options, serial dating is not her thing.
Her best friend and roommate, the ever charismatic Cole Banks, likes to use his charming smile and silver tongue to his advantage. The more ladies the better; as long as Ms. Right Now doesn’t expect breakfast in the morning. It’s quantity over quality for this bachelor, until he realizes he wants more out of life. Starting a career he can be proud of is a step in the right direction to becoming the man he eventually wants to be.

The lines blur between these roommates almost daily—filled with stolen glances, cuddling, and front flips—but fear of losing their friendship holds both of them back from taking a chance on love. The path of least resistance is not only best for their precarious living arrangement, but for their friendship as well. If they’d just listen to their gut, maybe they’d discover the forever kind of love everyone dreams about.

Dream Girls: Nicole: Nicole Garrett, a self-proclaimed nerd, has had her future planned out for years. Taking chances has never appealed to her on any level, but growing up means adapting to change and accepting that life moves on no matter what. With her best friends, Piper and Stephanie both starting families of their own, Nicole finds herself concentrating harder on her plan to become a doctor, leaving little time for anything else, other than working at the local pub to help cover her living expenses. There is nothing worth more to her than making something of herself—unless you count Corey Tate.

Corey Tate isn’t a self-proclaimed anything. He doesn’t care enough. But ask anyone who has ever been around him and they’ll tell you he’s a bad-boy-recluse, who has a somewhat short fuse. He works hard and plays harder. Even though he has no clue what is involved in having an authentic relationship with a woman, Nicole Garrett has him curious enough to consider trying. Having zero experience in relationships proves to be a challenge for him, both mentally and emotionally.

Timing is everything, right? How much time has to pass before the moment is lost? Two years of knowing glances, private talks, and a connection that surprises them both, come to a head when Corey draws a line in the sand. Can these two very different people find their way to a love that can last forever, or will their own flaws ruin what could have been? If Corey and Nicole could get out of their own heads, they might just find out the difference between falling in love and being in love. 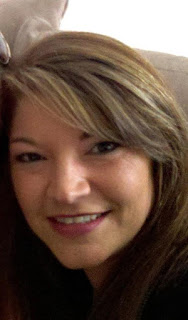 Carrie Thomas is the author of young adult and new adult romances. When she’s not writing or reading, you can find her traveling the U.S. or stalking her favorite bands. She lives in the South with her husband and two sons. Aside from traveling, any time spent with her family she considers a good day. She’s a firm believer that book lovers should stick together.