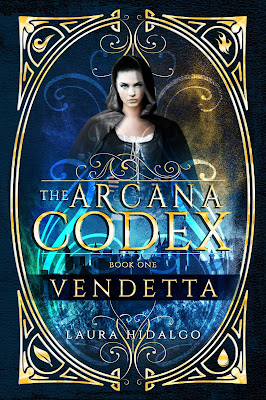 Kaylin Wilde witnesses the brutal death of the person she loves most, her father, and her life is undeniably left altered beyond repair. Anger and fury compels Kaylin for revenge, but her desire is thwarted when a letter reveals she must fulfill her father's final wishes.

The need for vengeance fuels her urgency to complete her father’s request, especially when she realizes more secrets have been left behind. More concerning are the hidden truths that begin revealing themselves after his death; including a worn and mysterious book left in her care—a book which cannot be opened.

If Kaylin ever intends to vindicate her father’s death, she must complete the journey, even if she has to travel to a place no mortal dares. Will Kaylin’s magical training aid her quest, or will she fail and leave her father’s death unavenged?


Ensorcelled JauntPush harder, her mind roared as her powerful limbs sprinted forward. Step by step, she was desperate to use her ability to go faster, to prove she was a warrior, like the rest of the Horde. Harder! she encouraged herself as she leapt over a fallen log, ducked under a low lying branch, and slid down a ditch into the small brook. The burning in her legs was a reminder––it was after her. She could hear the panting, its claws digging into the wet mud, and her own splashing as she ran through the spring. Her vision was disoriented from the caapi root tea she'd been given, which forced her to use her other senses to navigate the forest. Around her neck, she wore a black tourmaline pendant nestled inside an ancient symbol with which she was not familiar. It served as a ward to block the use of elemental abilities to the person who wore it, but Kaylin Wilde thought it was a miserable nuisance. Her long hair had been purposely cut to match the other Horde members. Shaved on the sides, all that was left of her raven tresses was a single, long braid, which bounced against her back. A few more feet. The air was chilled, and a fine mist had coated the surface of every plant, rock, and tree, making this jaunt even more dangerous. One mistake could be disastrous. The crisp air intermingled with the scent of pine trees, moist soil, and the strong, distinctively repulsive odor of the beasts chasing her. She needed a way to outrun them, but without her ability, she needed her wits more than ever. In the distance, the glistening water bounced off her salvation, and she knew what she had to do. Kaylin saw the long branch hanging over the small brook and realized she only had one shot or she would be done for. Moving to the edge of the water as her toes dug into the wet muck, Kaylin took two long strides and leapt onto a large boulder. With the force of the landing, she bent her knees and then catapulted herself toward the branch before her. Kaylin's calloused palms connected with the rugged bark, and her fingers tightened around the limb. She lifted her legs just as she heard the loud snap of jaws clamping, ruthless growling, and her own labored breathing.Read More: https://goo.gl/BdbT3h

Laura Hidalgo is an award winning creative genius when it comes to graphic design within the book world, but most aren’t privy that she’s also a storyteller. Whether it’s drama or fantasy, her creativity allows her to write emotionally gripping stories inspired by her personal experiences, or  adventures of realms from far and beyond. When she isn’t juggling life with her Brady-like family of her two kids and her hubby’s two teenagers, she is working on her next project and adding to her collection of works-in-progress.