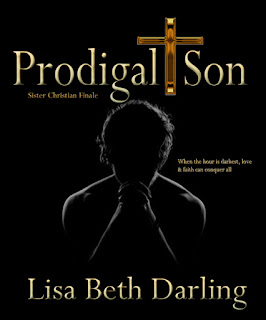 Prodigal Son-Sister Christian Finale
Blurb:When the Hour is Darkest Love and Faith Can Conquer All.
In the final installment of the Sister Christian Series, the Court has demanded a hearing regarding Hannah's capacity. Hannah and Nick are falling deeper and deeper in love. Looking forward to a bright future together they begin planning their life together. A shadowy stranger from the past has set his sights on Hannah and her 3.5 million dollar trust fund. Is he really Rick MacNeill, the son Hannah thought died in the terrible fire at Saint Anne's? Is he someone sinister? The last of the family secrets come to light in this roller coaster ride of suspense, love, betrayal, and faith.
SHORT EXCERPT:Coming through the soup kitchen line on that fourth day, she smiled at him as she asked; "You're from Michigan?"
Knowing that his plan was working he did his best to keep his cool as he made full eye contact with her for the first time since he started coming here, "Pardon, ma'am?"
Hannah was thunderstruck by the sight of those piercing blue eyes. Her stomach turned and a knot twisted in her throat making her feel as though she were about to vomit. Catching her breath and trying hard not to stare at those eyes or the arch of his brow and the line of his nose, she cleared her throat as she fumbled for recovery, "I saw the plate on your car yesterday, I'm from Michigan too, Victorville, you probably never heard of it."
"Me too," he mumbled and held his burnt hands out for the steaming cup but she didn't release it to him right away.
Trying not to stare at him and appear rude, Hannah thought he man looked oddly familiar but she couldn't quite place him. He seemed far too young for her to have known when she lived there but it was the only logical explanation coming to her mind, "Did you go to Saint Mark's?" No, probably hadn't been in her class but maybe he was the younger brother or even the son of one of her old classmates.
"Me? No, ma'am, I went to school at Saint Mary's Orphanage, that's where I grew up. But I was born at Saint Anne's." He'd been anticipating a reaction but when her eyes welled with tears and the hot cup between them spilled its hot contents over her hands it was more than he'd hoped, "Ma'am? Are you ok? Here let me take that."
Letting go of the cup she picked up a nearby dishrag to wipe the hot broth from her hands, "Clumsy sometimes, I'm sorry, did you get…did you get burned?" Even as she handed over the dishrag for him to clean his hands, Hannah shook her head slightly admonishing herself. Of course he'd been burned, what a stupid thing to say.
Settling the cup of soup down on his tray he gave her a smile as he held up his hands for her to get a really good look, "They don't feel anything. I got burned a long time ago all the way to the bone."
A bolt of ice shot down Hannah's spine as she wavered on her feet with her knees suddenly threatening to give out from under her. "I'm-I'm sorry about that."
"Why? You didn't do it, did'ja?"
With her throat threatening to swell so much it cut off her air supply and her knees growing weaker, Hannah grabbed her side of the counter to keep steady as she choked out a question, "What's your name?"
"Richard, my friends call me Ricky." Without waiting for her to reply he slid the tray down the line where the nun was waiting to give him French fries and a chicken salad sandwich.  Taking his customary seat where he could see Hannah serving people from behind the line he watched her excuse herself and run off into the kitchen.  Trying not to be too obvious about it, he adjusted his seat and craned his neck until he saw her downing a few pills from the bottle in her pocket. She grabbed the side of the long metal preparing table, bent over it, and tried to catch her breath even as she shook her head, "Got'cha, hook, line and sinker."

Lisa Beth Darling is 49 years-old, lives in her hometown of New London, CT with her husband of 30 years, Roy and is mother to their two daughters.  She is the author of more than fifteen novels along with several short stories and non-fiction books. When she’s not writing she likes to garden and is an avid movie buff.
Author links: Website: http://www.lisabethdarling.com Blog: http://lbdarling.wordpress.com Twitter: @lb_darling Facebook: http://facebook.com/lbdarling Goodreads: https://www.goodreads.com/author/show/1577311.Lisa_Beth_Darling
Purchase Links: Amazon/Kindle: http://amazon.com/author/lisadarling Nook: http://barnesandnoble.com/c/lisa-beth-darling iBooks: https://itunes.apple.com/us/artist/lisa-beth-darling/id411650358?mt=11 Smashwords: https://www.smashwords.com/profile/view/lisadarling