~Cover Reveal & Giveaway~ Everything She Ever Wanted by Liz Durano 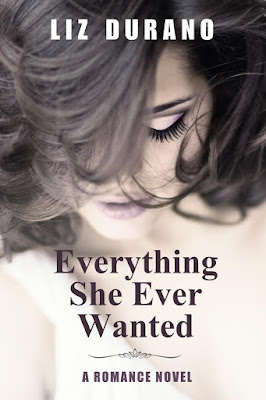 When her husband leaves her for a younger woman, transplant surgeon Harlow James finds herself alone at forty, without family and a career that’s falling apart at the seams. So she hits the open road and ends up in Taos, New Mexico where she hopes to find out where her life went wrong…

…or just end it all.

But when master craftsman Dax Drexel unexpectedly shows up at her doorstep, Harlow finds herself with the perfect distraction. For Dax is everything she never thought she’d want in a man - rough around the edges and way too young.

But he may also be the one man who can give her everything she’s always wanted. 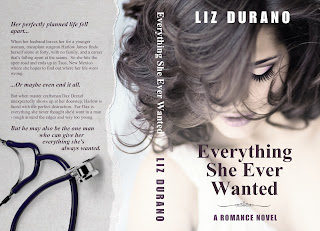 But thanks to rational me ruining all the fun, Dax is keeping true to whatever we talked about—or rather, what I talked about—that he stay on his side of the Pearl and I stay in mine… well, sort of. I hate having set boundaries because now I know that if anyone is going to break them, it’ll be me.

By the time I’m in the kitchen brewing coffee, I feel it—that jittery feeling that has now invaded my chest with my heart that’s beating so fast I can almost feel the blood coursing through my temples. I fill two earthenware mugs with coffee and take a deep breath.

You brushed your teeth, washed your face and mussed up your hair. You’ll be fine. Now go bring him coffee and say hi.

I see Dax before he sees me, but I don’t say anything. As far as I’m concerned, the last three days spent with him are equivalent to the sum of a lengthy foreplay and right now, I’m on fire. I’m just glad that he’s too busy to notice me as I stand awkwardly by the door, acting as calmly as I can although inside, I’m bouncing all over the place.

What is wrong with me?

Dax is pulling something that looks like a wood planer though he uses it differently, pulling it towards him instead of away from him, the way I’ve seen carpenters do it. Instead of short slivers of wood, I see a paper-thin strip unfurl from it gracefully before Dax flicks it away before bringing the planer back to the opposite end of the board. Then he does it all over again.

Through his thin white shirt, I see his muscles tense with every movement. I could name them all if I wanted to—latissimus dorsi, triceps brachii, deltoid, infraspinatus and teres major—but I want to do more than that. I want to touch them all, run my fingers over them and feel them ripple beneath my skin. And I won’t stop there. I want my hands to move lower down his back, feel my fingers rake against his smooth tanned skin. I want—

Suddenly Dax stops whatever he’s doing, straightens his back and turns to look at me.

“Hi,” I stammer, hoping my face doesn’t betray my thoughts. “I… I brought you coffee.”

“Thanks,” he says, and that’s when I see that he’s brought a Thermos with him, and I feel like an idiot. Of course, the boy scout would bring his own coffee. I made the rules, didn’t I? I wasn’t going to entertain him, nor he entertain me.

“I’m sorry. I didn’t realize you brought your own,” I turn around before he can say anything but Dax is a fast mover. Suddenly he’s standing in front of me, and he takes one of the mugs from my hand.

“Thank you,” he says, his gaze moving from my face down to my lips, and then the front of my robe. I didn’t even bother to get dressed. And why would I? I don’t want to get dressed, not with this man standing so close to me, his cologne and that man-smell of his sending my hormones into overdrive. I lick my lips.

“Did I wake you?” he asks as he sets the mug down on the table next to us.

I shake my head, keeping my eyes on his mouth. “No, I didn’t even realize you were here until after I was, um, making coffee in the kitchen.” Liar. And where else would you make coffee anyway? “So I thought, maybe…”

Dax takes the other mug from my other hand and sets it down. I don’t even protest. I don’t know if I still have it—whatever it is that men want—but a part of me wants to find out. I want to know if it’s all my imagination, the way he looks at me, and how his gaze travels from my eyes to my lips, lingering there before moving downwards. I want to see that bulge in his jeans, reminding me that I’m still attractive, beautiful even.

“Harlow…” he murmurs, and I feel his fingers pushing an errant lock of hair from my face. He dips his head, and now I’m looking at his eyes. Blue and so intense. My heart beats so loud I can almost hear it echoing throughout the room.

I stifle a moan and press my thighs together, feeling the heat rise to my chest. I bite my lower lip this time and let my gaze move down, and I exhale triumphantly. He’s hard, and he’s—

“There’s someone at the door,” he says, the words snapping me back to the present.

Then I hear it. Someone is at the door.