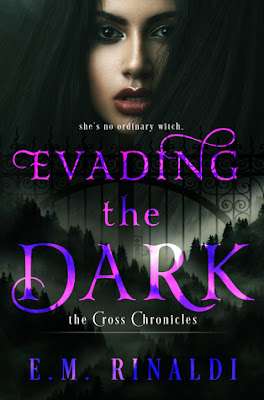 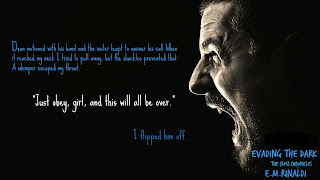 psychotic pup, Boone. By day she is a Registered Radiologic Technologist taking pictures of mangled bones and by night she writes about all the bizarre situations her characters get themselves into while she was away. She is a Second Degree Blackbelt and can’t write a story without at least one fight scene in it.

When she’s not writing or trapped at work, E.M. likes to read (obsessively), clear her DVR, and have all night Buffy marathons with her friends, complete with cookies and cinnamon rolls.
Her love for writing stems from an early age where she would create stories on an old computer program and force anyone within grabbing distance to read them. Not much has changed; be warned: stay out of grabbing distance.
Evading The Dark is her debut novel and the first of The Cross Chronicles. 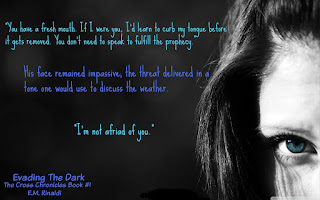 All I knew was pain. It consumed me, its excruciating strength refusing to let my mind focus on anything else. I struggled, an unwilling passenger of my own mind, as I felt muscle being separated from bone and each individual tendon tear as they were twisted in a direction they were not meant to go. I suffered the deep throb of a bone being pulled from its natural joint. I wanted to give up and just let the agony overwhelm me until it hurt too much to stay conscious. When my body could no longer take the torture, I would be free.

But before I could give in, my attacker made a crucial mistake. As he made another tug on my arm, a twinge shot through my shoulder forcing a strangled yelp from my mouth, and he laughed. The bastard stood there—I bet with a damn smirk on his face—and laughed.

His laughter reached a part of me that I hadn’t noticed until that moment, a part of me that was literally fighting to get out and kick this guy’s ass. Anger fueled the adrenaline that now pumped through my body in full force. Muscles coiled and tensed in preparation to fight. My foe felt my change in posture and went to tug on my arm again, but I was already moving.

I let instinct guide my free hand right into his nose. The sickening crunch of breaking cartilage filled the air, but I didn’t have time to enjoy the surprised look on his face before my well-practiced side-kick sent him flying toward the back wall of the gym. Reality came back to me slowly; I was still standing in a fighting stance, blood roaring in my ears, heart pounding in my chest, as I became aware of the other students in our training class. 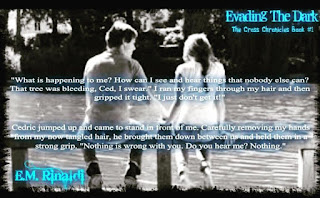