#NewRelease - Halloween is Murder by @Carolyn_Arnold 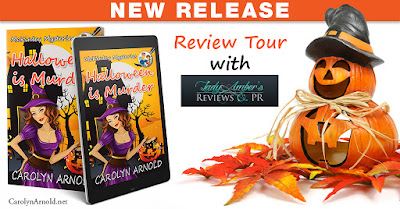 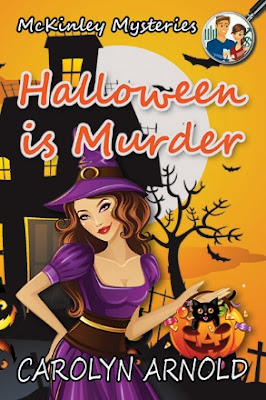 Blurb:
Beware of all that goes bump in the night…

Sean and Sara McKinley are excited about the haunted house they’ve set up as a Halloween charity fund-raiser, but things take a ghoulish turn when the reporter covering their story is found dead. With the media keeping mum about how she died, Sara’s curiosity is piqued, and she convinces Sean to take on the investigation through their PI firm.

But this case is not without its challenges. The police are actively investigating it, as well, and it’s not even clear that the woman was murdered. It will take a little cloak-and-dagger, dress-up, and finesse for the McKinley’s to get to the bottom of it, but they aren’t the kind to give up.

As they troll for leads and work through the skeletons in the reporter’s closet, they unearth a few suspects, but they’ll need to carve out the whole truth if they’re going to find her killer. If they do so fast enough, there might even be time for a little trick-or-treating.

CAROLYN ARNOLD is an international bestselling and award-winning author, as well as a speaker, teacher, and inspirational mentor. She has four continuing fiction series—Detective Madison Knight, Brandon Fisher FBI, McKinley Mysteries, and Matthew Connor Adventures—and has written nearly thirty books. Her genre diversity offers her readers everything from cozy to hard-boiled mysteries, and thrillers to action adventures.

Both her female detective and FBI profiler series have been praised by those in law enforcement as being accurate and entertaining, leading her to adopt the trademark: POLICE PROCEDURALS RESPECTED BY LAW ENFORCEMENT™.

Carolyn was born in a small town and enjoys spending time outdoors, but she also loves the lights of a big city. Grounded by her roots and lifted by her dreams, her overactive imagination insists that she tell her stories. Her intention is to touch the hearts of millions with her books, to entertain, inspire, and empower.

She currently lives just west of Toronto with her husband and beagle and is a member of Crime Writers of Canada and Sisters in Crime. 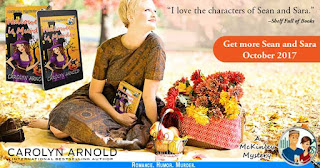 STUCK BETWEEN A GRAVE AND A TOMBSTONE

SARA’S HEART RATE TICKED UP a few notches at Marie’s assured conclusion that someone had killed Chloe. She could feel Sean staring at her, but she refused to look at him. She knew that his eyes would be telling her not to get attached to investigating this case. Besides, he had said they could look into Chloe’s death more, which hadn’t been a commitment, she knew, but she’d taken it as his word. Even a little investigating was a step in the direction she wanted to go. And just because she had a gut feeling about Chloe’s death didn’t mean she’d lost all objectivity.
“Why do you think someone killed her?” Sara asked.
“It’s just… None of this feels right.” Marie picked at her purse strap, its fabric frayed and threads poking out. Probably a nervous habit of hers.
Sara gave Marie the once-over. For someone who lived in a nice neighborhood, Marie’s clothing and accessories didn’t speak of wealth. It also didn’t seem Chloe’s sense of style was a trait her sister shared.
“And why doesn’t it feel right?” Sean, a skeptic if ever there was one, pressed.
Sara looked over at him. It didn’t seem to matter how long they worked together; he would never fully cave to the weight she put on intuition.
So much for rubbing off on the people you spend the most time with…
“The police talked to me at length,” Marie said, “but they didn’t ask the types of questions I would have expected if they were treating it as a murder.”
“Like what?” Sara asked.
“I thought they would have asked who would have had reason to kill her, for one.”
“We spoke with Jackson—” Sean started.
“Yes, I know,” Marie cut in. “That’s how I got your information.”
“Then you know that he was held for questioning.”
Marie nodded. “I do, but he didn’t think they grilled him very hard, either.”
There was only so much law enforcement could do without cause. Still, they could have held Jackson for longer than the time it had taken them to question him. By law, they had up to twenty-four hours to hold him without filing a formal charge.
“And Chloe’s health was excellent. We have no history of disease or people just—” Marie averted her eyes “—dropping dead in our family. Our grandparents lived into their eighties on both sides. Now, our parents are both dead, but they were in a car accident.” She added the latter part quickly.
“Do you have any other siblings?” Sara asked, though she only remembered reading that Chloe had a sister.
Marie shook her head. “It was just…” She cupped the sides of her face and pinched her eyes shut. Tears squeezed out from the corners, falling down her cheeks without apology.
A knot balled in Sara’s chest, and she took a shallow breath. She was getting too caught up emotionally—again. And taking on the grief of others wasn’t healthy. At least so far with this case, she’d managed to stuff the feelings deep down inside. But she’d be lying if she said she didn’t fear that one day they’d bubble to the surface all at once.