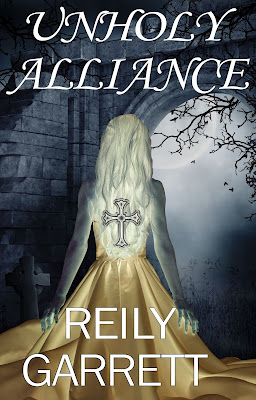 Blurb:
Can fated love poised between the illusion of immortality and the certainty of death find new life between hope and adversity?

Fate will always have her say, whether vampire, witch, angel, or ghost. After centuries of protecting humanity from supernatural threats, Michel is tasked by Vampir Bruderschaft to find and destroy an ancient relic destined to decimate humanity. In securing the artifact, Michel is mortally bitten by a unique breed of demon.

Since the day she survived a rogue vampire attack, Sariel has trained to destroy demons and vampires alike. With a witch as mentor and a ghost for companionship, she has everything she needs, until three demons cross her path. Noting her angelic origins changes her entire worldview, complicating the simple life she has always craved.
As the prophecy unfolds, the vampire, angel, and witch must form a truce to survive demonic forces while navigating the murky waters of desire and betrayal, paranormal talents, and malevolent cunning.

Reily is a West Coast girl transplanted to the opposite shore. When she’s not working with her dogs, you can find her curled up with a book or writing her next story. Past employment as an ICU nurse, private investigator, and work in the military police has given her countless experiences in a host of different environments to add a real world feel to her fiction.

Over time, and several careers, many incidents have flavored the plots of her stories. Man’s cruelty and ingenuity for torment and torture is boundless, not contained by an infinite imagination. Witnessing the after-effects of a teenager mugged at knifepoint for a pair of tennis shoes, or an elderly woman stabbed repeatedly with a screwdriver for no apparent reason, left an indelible impression that will forever haunt her subconscious. In counterpoint, she has observed a woman stop her vehicle in severe, snowy weather to offer her own winter coat to a stranger, a teenager wearing a threadbare hoodie. Life’s diversities are endless.

Though her kids are her life, writing is Reily’s life after. The one enjoyed after the kids are in bed or after they’re in school and the house is quiet. This is the time she kicks back with laptop and lapdog to give her imagination free rein.

In reading, take pleasure in a mental pause as you root for your favorite hero/heroine and bask in their accomplishments, then share your opinions of them over a coffee with your best friend (even if he’s four-legged). Life is short. Cherish your time.

The last blush of twilight relinquished its clutch on the mountain ridge to abandon the diversified splendor of the forest below. Nocturnal predators rose from their lairs, dens, and hollowed perches to scavenge the countryside in hopes of capturing lingering prey reckless enough to tempt the proclivities of fate.
“Michel—anything?” Strong gusts of wind whipped Gryffen’s short, blond curls about his face. His decent through the cloud cover to match speed with Michel left him visible to any creature below.
Gossamer webs of sleep still clung to his mind as Michel flew just under the low, ashen clouds. A light film bathed his face from the weight of their burden, lifted by the breeze of his passage. “No, all’s quiet. But the blood moon’s on the rise.” Soon it would flood the land with its heavy crimson blanket, foreshadowing a braided entanglement of destiny with man’s single-mindedness to survive.
“Hell, we can’t circumvent the prophecy if we can’t find the damned artifact.” Gryffen’s life consisted of one capricious adventure after another, sewn together with a penchant for finding trouble. The temporary lapse in his fun-loving nature signified the seriousness of their mission.
With all the modern technological advances extorted from fate, nothing explained Michel’s ability to defy gravity any more than his telekinetic talent. Yet these skills renewed his enthusiasm for learning and validated his intellectual existence and worth. “Too much mystery surrounds this gem.” A composite of scents and sounds of the forest rose from below to greet Michel in the deepening twilight.
“Yeah, like how do we destroy it? If it’s part of a prophecy, sophisticated safeguards must protect it, probably dark magick. For something so critical, why not send more in its search? Aren’t there a couple others older than dirt—like yourself?”
“Thanks, Gryffen. I miss your sense of humor when you venture off on your hunts. It is unusual for The Brotherhood to withhold information considering the dire repercussions for failure. At least they didn’t object to my enlisting you and Nichasin for assistance.” As an apex predator, Michel enjoyed existence at the top of the food chain and as master of everything within his enhanced sight, yet the deep stillness surrounding them was rank with the niggling portent of evil yet to come.
“Ah, figured I’d lend the old one a helping hand.”
“I’m surprised to see you in this sector...Thought you’d gone caving.” Gryffen’s fascination with caves spanned centuries without the slightest inclination of waning. No surprise he volunteered to search them. Still, his help would shorten the hunt for the artifact.
“Thought I’d check in with you first. I’m still amazed this brotherhood either wouldn’t or couldn’t give you further information. Hell, find and destroy the ruby that will key a prophecy? Sounds pretty shifty, even for them.”
“Yeah, not much help, except the minor detail...I’d probably find it on or near a demon, which will die for its effort.” Hair on his nape stood as if to ward off the virulent tension romping down his spine.
“Only an angel can kill a demon, Michel, and you sure as hell don’t bat for that team. Hey, remember the first time we encountered a dirtball from hell we’d dispatched months earlier? He thought he’d get another shot at a master vamp. The dumb shit.” A slash of moonlight exposed perfect, white teeth in Gryffen’s youthful grin.
“Yeah well, consider the source.”
“Probably won’t see you again tonight. Some of those caves run pretty deep. Happy hunting.” The stiff breeze snatched Gryffen’s last words as he angled toward the saw-tooth profile of his destination.
“Go, have fun. Maybe Providence will grace you with her cutting-edge wisdom.”
“Not in my existence.” Gryffen’s laugh filtered back, thinned by the growing distance and moisture-laden air.
Despite Michel’s studies and commitment to humanity’s protection, a void had rooted in the darkest corners of his mind. Each rising, it surfaced to extort any novelty or anticipation in his automated reality. Duty had always come first, after which he studied whatever snared his attention. Still, he hungered for more—something to chase away the shadows and blisters cauterizing his soul.
Centuries of experience honed him into an expert assassin and tracker for evil’s myriad and divergent forms. Yet each kill left a new stain on his spirit that darkened his aura and took him further from the light of man. Since defeat had never left its toxic breath in his extended history, this mission would prove one more in a long series of significant encounters.
Minutes later, the scent of demon filled his nostrils. Descending to skim the void above the treetops rewarded him with a stronger stench. Whether this demon held the precious artifact or proved another dead end didn’t matter. Its removal fell among his duties as an ancient vampire and benefactor to humans, a win-win situation in the grand scheme of things.