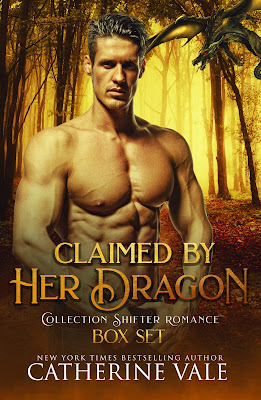 Dragon’s Mark
After his father, alpha of the Greystone dragon clan turned his back on him, Kane left it all behind to become a mercenary, answering to the highest bidder.

A chance encounter with a dangerous dragon ends with Kane being hired to take out an alpha of an opposing dragon clan. Gaining access to the leader is the least of his troubles. When Kane comes face to face with the alpha’s daughter, she isn’t just a distraction, she’s his fated mate.

Will Kane follow through and destroy the alpha he was hired to take out? Betraying his employer means war, but betraying his heart could cost him everything.

Kiss of Fire
There's nothing sexier than the kiss of a primitive, dangerous, and irresistibly gorgeous shifter, especially one with the power of the dragon...

When Arianna finds herself face-to-face with the gorgeous castle blacksmith, Craig James, she feels such an intense connection to the man that she is left stunned, unsure what the hell is happening to her. He's not just remarkably handsome, he also possesses an irresistible charm, that leaves her powerless to resist him.

What begins as a one-night stand, quickly turns into something more, as Arianna finds herself thrust into the middle of a world filled with mystery, and magic, where tales of flying dragons and dangerous witches come to life, and where nothing is ever what it seems.

Shades of Dragon
Abandoned by his mother as a young boy, and taken in by the elders of the Redwater clan, Tegan isn't your typical hero. In fact, if you ask him, he wouldn't call himself a hero at all.

Yet when he is asked to investigate the outcome of an attack on the nearby human villages, what he discovers invokes the rage of a thousand storms, and he finds himself on the run with a beautiful stranger.

Tegan may be half dragon, half human, but he's all heart. If he doesn't stay focused on the mission at hand, he will find that the curvy woman he's determined to protect, could be on her way to stealing it.

Dragon Heat
When the curvy dragon shifter suddenly loses her ability to fly and finds herself hurtling to the ground, Adalyn must admit, she's one hot mess. Unable to escape the city without wings, she goes on the warpath to find out exactly who is responsible for her inability to shift.

A few hours later, she finds herself drowning her sorrows at the local watering hole. What's a girl to do when she has nowhere to go, and no one to call for help?

She falls into bed with the sexiest man in town, of course. Except the guy isn't exactly able to help considering his reckless behavior is the reason why she can’t leave.