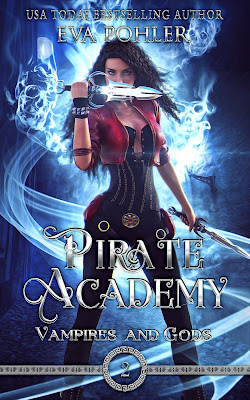 If you can't beat them, join them.

After learning the truth behind the vampire pirates swarming the Mediterranean Sea, the young gods and demigods join forces with the vampires in the fight against corruption.

But first, they must learn to be pirates. According to one of their leaders, Delphine, it's a dangerous art form that any can learn but not all can survive.

Delphine also says there's no room for both love and war. And there's a war going on.

If you like enemies-to-lovers romance and heart-breaking love triangles combined with fast-paced, high-stakes action, then this series is for you. 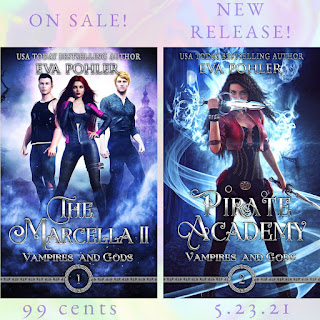 Praise for book one, The Marcella II (which is currently 99 cents and can be found here https://www.evapohler.com/pirate-academy):

"I absolutely cannot wait for more Adventures. I tried not to read so fast but honestly I couldn't be patient. This book blew me away and I honestly just need more."--Southernmermaid85, Amazon Reviewer ★★★★★

"Must read!! Anything this author writes is amazing to read. It's what got me into loving anything about the greek gods! And her vampire series is so interesting as well! This book combines both and draws you in!!"--Amazon Reviewer ★★★★★

"Everything I've come to love and expect from Eva's book, was to be found in this latest episode, constant drama, intrigue and adventure, not forgetting the romance. Can't wait for more!"--Traceyann, Amazon Reviewer ★★★★★

"I really liked the new characters that were introduced in this book. The story was interesting and had a lot of twists and turns."--Kathy E, Amazon Reviewer ★★★★★

"☕What an amazing story it is, this is the first book in the series and it definitely took me by storm because of the unique concept and theme. The story is a perfect blend of fantasy with action and thrill. Eva is definitely a master storyteller who doesn't let her readers down no matter what." ★★★★ --Rutuja Ramteke, Amazon Reviewer

"Love it! Amazing read as always. Very well written. Can't wait for the next one." ★★★★★ --Tonya Edmonds, Goodreads Reviewer 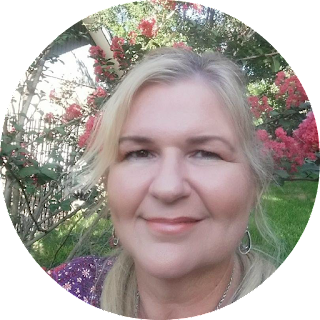 Eva Pohler is a USA Today bestselling author of over thirty novels in multiple genres, including mysteries, thrillers, and young adult paranormal romance based on Greek mythology. Her books have been described as "addictive" and "sure to thrill"--Kirkus Reviews.

“You and Taavi create the distraction,” Alastair said to her. “Fight or kiss—your choice. And Hestie, you be the thief this time.”

Gertie clenched her fists. If she screwed this up, it wouldn’t help Hestie’s opinion of her. No pressure.

She glanced at the captain, who seemed amused by the pirate training as he enjoyed his beer.

He lifted his mug and said, “Good luck.”

“When will it be the captain’s turn?” Gertie asked Taavi.

“Never,” Prometheus said. “Never, ever, ever will I go by the name of pirate, no matter the cause. But cheers to you.” He lifted his mug again.

Their group had moved down the plaza from The Black Pearl to The Galley Bar and Restaurant, so they could work on new targets without arousing suspicion. Their newest target was a middle-aged woman sitting alone at a table across the street, where she sipped from a glass of wine and gazed at the dark, shimmering sea.

Follow my lead, Taavi said to Gertie with a wink as he took her by the hand.

For a split second, he reminded her of Jeno.

As they crossed the street together, Gertie said, “I like your new clothes.”

He was wearing a gray t-shirt with a black leather vest and black jeans.

Taavi stopped near the deck, not far from where the target was sitting, and stood close to Gertie. His body was long and lean, and he took Gertie into his arms and gazed down at her with his golden eyes from beneath dark, thick brows. His dark, wavy hair blew in the wind. She had her hair tied in a ponytail at the nape of her neck. When Taavi smiled, a single dimple appeared in his left cheek.

I am going to kiss you, okay? Then you slap me and call me a terrible name. Pretend you do not appreciate my advances. He winked again. Of course, you and I know otherwise.

Gertie chuckled. This should be fun.

Gingerly, Taavi caressed her bottom lip with his. Then he pressed his mouth firmly against hers as he pulled her into a tighter embrace. Gertie lost herself. She hadn’t been kissed like this, with so much longing and so much hunger, in such a long time. Part of her knew that Taavi was acting, but another part of her hoped that he wasn’t.

Still dazed moments after the kissing had stopped, Gertie looked up at Taavi, bewildered. Where she had previously been drawn to him by the prospect of his bite, she was finding herself longing for more.

He grinned. Any moment now, you can slap me.

“Oh,” she whispered, snapping out of it.

Remember to be dramatic, he added.

He lunged for her again, his mouth covering hers. Her body shivered with pleasure. She didn’t want it to end.

He pulled away, laughing. “Gertie! Concentrate!”

She slapped his cheek so hard that it stung her hand. “Leave me alone!”

Taavi took a step back, looking shocked by the blow.

“How dare you!” Gertie added. “You, you…” she couldn’t think of a bad name to call him.

He pulled her toward him, and she tried to fight him off, but when he pressed his lips against hers again and circled his arms around her waist, she kissed back. Before she knew it, she had grabbed fistfuls of his hair.

The others are watching, he said.

Again, she snapped out of it and slapped his cheek. She glanced at the target and noticed the woman was walking away from her table, her purse in hand, and leaving the bar altogether.

“Did Hestie have a chance to…” 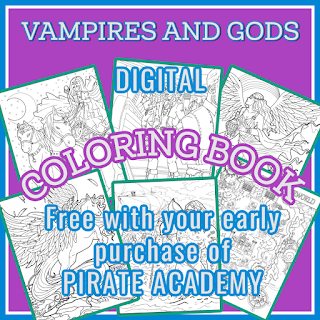