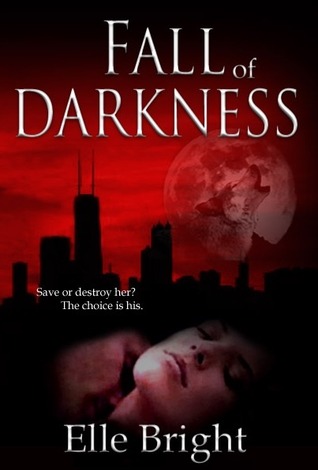 One woman, the fate of the world in her unknowing hands. One man, sworn to destroy her. A love so strong it defies nature. In a world of obsession, deception and betrayal, the line between good and evil fades, but one truth remains absolute. Darkness must fall.

For centuries, werewolf, Dominic Ridolfi, has battled the demons of the night, upholding the sacred pact to protect man from vampires. Yet when sent to destroy the long lost Cacciatori heiress, the vampire prophesied to free her kind from the curse of darkness, he finds himself reluctant to complete his task. The innocent beauty awakens his humanity and Dominic finds himself not in the role of assassin, but savior.

Swept away in a whirlwind romance, Kate loses herself in Dominic’s mysterious world of opulence and seduction. But Dominic has a secret. He knows the truth about Kate’s past, and her future, truths with the power to destroy them both. Only in her dreams does Kate sense the growing darkness within. Dominic saved her once, but can she save herself from the darkness within?

Elle Bright grew up in Layton, Utah. Elle currently resides in San Diego, California, with her husband, their three children, and their border collie. Elle graduated from Grand Canyon University with her Bachelor's of Science in Nursing. As a practicing Registered Nurse, Elle specializes in Pediatrics, Neonatal Intensive Care, and Emergency Medicine. Fall of Darkness is Elle's first published novel. She is currently working on Dark Redemption, the second installment in The Darkness Chronicles. Elle is a proud member of the Romance Writers of America.
Author Links:

At last, the time had come. Soon the blood of evil would stain the earth. Soon the reign of darkness would fall. The end was near.

A knock sounded at the door. Ah, that would be him. Salvatore swiveled in his chair, turning his back on the wall of floor-to-ceiling windows and the warmth of the late afternoon sun.

“Enter,” he called, his voice the brittle rasping of dry leaves, even to his own ears. He may not look his five hundred and eighty-two years, but he felt the toll of each and every one of them.

His son, Dominic, swaggered into the light of his office, full of youthful arrogance and casual impunity. But, Salvatore knew all too well appearances could be deceiving. Behind the younger wolf’s mocking eyes and lazy smile lurked a keen intelligence and fierce determination. This man was tarnished steel, tempered by a life of violence and suffering. Hard to the very core, Dominic was the greatest warrior their kind had ever known. Sharp. Deadly. Unstoppable.

Halting to stand before the desk,

Dominic waited in silence, black brows drawn together in question. Salvatore cleared his throat. “The time has come.” A flicker of surprise crossed his son’s face and the solid mask of indifference fell back into place.

“The prophecy?” Dominic asked softly. Salvatore inclined his head in acknowledgement. He slid a thick file across the smooth surface of the desk. Dominic stopped its progress with one deft finger.

“Confirm her identity. Destroy her. For your family and for your kind.”

Salvatore watched the hope of their race leave in silence. Ah yes, the end drew near.

Turbulence played paddle ball with the Gulfstream as the jet sliced its way through the angry night’s sky. The flight had been jostling and uneven thus far, but it would take far more than a patch of rough weather to break his concentration.

Alone in the section of cabin he used as his office, Dominic rolled up his shirt sleeves and spread the papers from the file on the desk in front of him. Heart pounding, his blood coursed with anticipation as he contemplated his task. Revenge would be his at last.

Kate Murdock… Katerina Cacciatori, he turned the two names over in his mind with unbridled loathing, the suffering of generations calling to him for retribution. His baby sister, Caprice… and so many others. The losses were grievous, but he would avenge them all. He reviewed the file with adept precision, siphoning information to assist the pursuit of his query.

Everything lay at his fingertips. Photographs, a copy of her driver’s license, school transcripts, employment records, lists of friends and acquaintances, habits and routines, every detail of her life was neatly catalogued in a single file.

“Who are you really, Kate Murdock?”