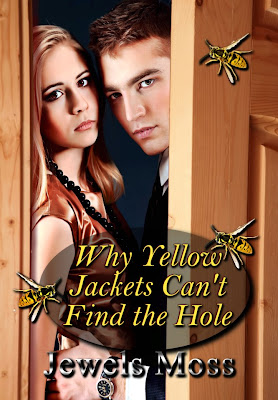 Oath of the Yellow Jacket

"The yellow jacket will not sting, will not step outside his means. He will not go and seek to partake in the act of love until he's found his mate. Of a lady's flesh he will not see, until he meets his honey bee."

18+ Novel
Bryant belongs to a club where you do not engage in carnal activity until you have found your wife. The club membership is passed down through families at the all boy school he attends. When they realize girls live next door to Bryant and his fellow yellow jackets they find it difficult to keep their oath to the club.  Bryant especially struggles due to the super hot Summer who enjoys tempting him any chance she gets.

Excerpt
That weekend was the first time that Bryant had a chance to sit down and think. Between Yellow Jacket meetings, school, home work, and cleaning up after Roy’s party he hadn’t had any time. He assumed Summer was busy as well, but she was never far from his mind. He was having intense sexual dreams about her.
Summer and Holly showed up that afternoon right before he was going to take a shower. He went down to talk to them for a bit and saw Henry in the kitchen. Roy was out buying beer and food for the weekend, they planned on breaking in the new grill.
Summer looked amazing; her white tank top didn’t leave much to the imagination. She wasn’t wearing a bra and her breasts were still perfect and perky. Her hips were hugged by a pair of low slung shorts and he could see the tops of her hip bones. He resisted the urge to pant out loud. This was the first time they would talk since their simultaneous orgasm the other evening, and he almost didn’t believe that it had really happened.
She was looking at him in a way that told him it definitely happened. She must be one of those girls that can get off on someone watching, and that was okay with him.  He walked over to her and leaned on the wall next to her.
“Sup,” he instantly regretted his greeting choice when she gave him a funny look.
“Hi Bryant,” giggling as she touched his arm, “how was your week, sleeping okay?”
Was she making fun of him? He instantly felt warm when she touched him, and just thinking about the other night was going to get him hard again if he didn’t say something.
“Like a baby,” nice save he thought to himself.
“I’ll bet,” she gave him a knowing look and then turned back towards Holly. “Should we tell them what we found out about them? “
Holly laughed and walked over to Henry, “Absolutely.”
Summer looked over at Bryant and smiled, making him think they were up to something.
“We asked around because we wanted to know what the Yellow Jackets were all about. Our girlfriends tell us that you guys are a purity club and that you are all virgins. Is that true?” She tilted her head and looked into his eyes; he knew she was thinking about the other night.
There were two options here and he rolled each one around in his head as he thought of how to respond. He could lie and tell her that it was just a front and he was actually a lady’s man, or he could tell her the truth. He went with the truth.
“Yes, we are virgins.” Looking at his feet he looked back up at Summer, “is that a big deal to you?”
Her eyes widened and she exchanged a look with Holly that looked a lot like Jackpot! “Of course not, I think that it is sweet.”
Holly piped up then, “I think Summer has just always wanted to deflower a virgin,” she elbowed her giggling.
“Holly,” she shrieked and actually turned red, “you are so bad. Don’t listen to her.”
Holly looked Henry up and down as she said almost too quiet to hear, “I know I have.”
Summer looked like she was plotting something, but she just smiled and said goodbye to them as they linked arms. They both giggled a lot as they went out the door, making him very nervous.