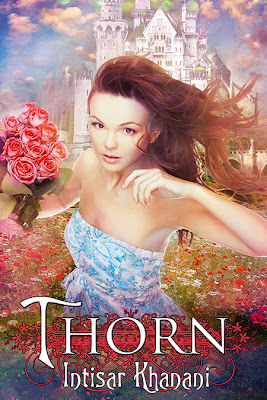 Blurb:
For Princess Alyrra, choice is a luxury she’s never had … until she’s betrayed.

Princess Alyrra has never enjoyed the security or power of her rank. Between her family’s cruelty and the court’s contempt, she has spent her life in the shadows. Forced to marry a powerful foreign prince, Alyrra embarks on a journey to meet her betrothed with little hope for a better future.

But powerful men have powerful enemies—and now, so does Alyrra. Betrayed during a magical attack, her identity is switched with another woman’s, giving Alyrra the first choice she’s ever had: to start a new life for herself or fight for a prince she’s never met. But Alyrra soon finds that Prince Kestrin is not at all what she expected. While walking away will cost Kestrin his life, returning to the court may cost Alyrra her own. As Alyrra is coming to realize, sometimes the hardest choice means learning to trust herself.

Intisar Khanani grew up a nomad and world traveler. Born in Wisconsin, she has lived in five different states as well as in Jeddah on the coast of the Red Sea. She first remembers seeing snow on a wintry street in Zurich, Switzerland, and vaguely recollects having breakfast with the orangutans at the Singapore Zoo when she was five. She currently resides in Cincinnati, Ohio, with her husband and two young daughters. Until recently, Intisar wrote grants and developed projects to address community health with the Cincinnati Health Department, which was as close as she could get to saving the world. Now she focuses her time on her two passions: raising her family and writing fantasy. Intisar's next two projects include a companion trilogy to Thorn, following the heroine introduced in her short story The Bone Knife, and a novella series set in a fiction world of eleven kingdoms all controlled by a corrupt Council of Mages. Thorn is her first novel.

“Trying to look your part?” The voice, filled with contempt, could hardly be
mistaken for any other. Not that I could, having sat beside him for ten years of which the
last three have been torture.

“Lord Daerilin,” I say, risking a glance at him. “I see you are wearing your velvet
doublet.”

Daerilin turns a mottled pink but keeps going. He must have a special barb saved up
for me today. “It’s a pity you can’t manage to put on something finer for such a guest as
this. Especially when he’s come all this distance for you.”

I nearly drop my goblet. “What?”

Daerilin leans back in his chair, his expansive stomach pressed against the table.

“Surely you know why the king has come.”

“I understood it was an affair of state.” I set down the goblet with shaking fingers
.
“How you are related to your mother is beyond me.” Daerilin grimaces, reaching for
his knife. A servant steps forward and serves him, carving three slices of roast goat and
placing them on his plate before serving me. I can only hope the king’s soldiers haven’t
noticed; Daerilin long ago bribed the man into serving him first as a slight to me. I never
really cared, until tonight.

I glance towards the soldiers’ tables surreptitiously. The foreign soldiers stand out
like hawks among sparrows, their light armor glinting in the firelight, their ebony hair
pulled up into tight knots. Our own warriors and women look pale and washed out beside
them, our skin and hair so much lighter. And while our men wear their swords and
daggers as well, with friendship bands binding hilt to scabbard, they have none of the
practiced grace of the Menaiyans when they walk.

As I study them, I catch the eye of the foreign captain. Like the other soldiers, he
wears his long hair in a smooth knot. Without a fall of hair to soften his features, he looks
weathered and hard, his eyes flat, ungiving. I look away quickly, turning back to Daerilin.
“Why has the king come to visit us, then?” I ask, now that my fingers have stopped
trembling.

Daerilin tosses back the last of his wine and waves his goblet in the air. “To find a
bride for his son, little princess. How would you like to marry the Menaiyan prince?”
My chest feels hollow. I force myself to breathe, to keep my expression still. From
the corner of my eye, I can see the king’s long-fingered hand lifting his goblet. He speaks
with my mother quietly; I can only just catch the faint lilt of his voice, the resonating
strangeness of his accent.

“We are hardly a strong ally for them,” I whisper.

“Perhaps they’re just looking for a mouse to snap up,” Daerilin replies as the servant
fills his goblet. “Their women do seem to die young. They wouldn’t want to upset their
closer allies by accidentally killing off the bride.” Daerilin smirks. “I daresay no one
would raise an outcry if something were to happen. To you.”

Click here to go to the rafflecopter in the author's page: http://thornthenovel.com/thorn-cover-makeover/