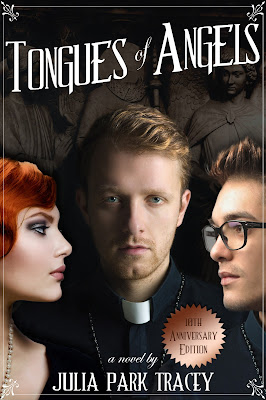 Synopsis:
A Catholic priest with questions. A penitent woman with a secret past. A jealous friend. The fourth in this lover's knot? God.

Father Rob Souza faces the forbidden desire of his own heart when Jessica, victim of a brutal assault, comes for counseling. Rob’s best friend, Lawrence, is a priest with an artistic temperament and trials of his own. A Greek chorus of gossiping priests, and church politics riddled with suspicion and battling for souls, force Lawrence, Rob and Jessica to make choices they didn't intend.

Tongues of Angels offers a peek behind the curtain of the priesthood, offering a funny, poignant look at Catholic angst and ambiguity. Based on a true story, Tongues of Angels is a canny, warm and surprisingly spiritual novel for our time. Now back in print for the 10th Anniversary Edition, through Indie-Visible Ink.

I'm the author of "Tongues of Angels," a sexy contemporary novel about the Catholic Church and a handful of priests who can't keep it holy. It has sex, religion, politics, and a host of unfulfilled desires that we can't talk about at the dinner table.

Elsewhere: I've been curating the diaries of my late Aunt Doris, the results of which you'll see in The Doris Diaries. The first volume is "I've Got Some Lovin' to Do," (Honorable Mention/Biography at Great Northwestern Book Festival, 2013) and the second is "Reaching for the Moon" (out in Sept 2013). The actual diaries will be archived at Reed College in Portland, Ore., where Doris went to college, and proceeds from sales of The Doris Diaries will support a women's scholarship at Reed. I hope you love Doris as much as I did, and still do. www.thedorisdiaries.com

Currently: A couple more novels are on the back burner and my memoir in short story is in the queue. Read a segment from "Wedlock: A Fictional Memoir" in the "Confessions: Fact or Fiction" anthology.

Background Check: I'm an award-winning writer, editor, journalist and activist. I have 5 kids (mostly grown). I've been a writer all my life, and blogging for about 10 years. I've also been a newspaper+magazine editor+publisher and have been a freelance writer for years. Google me and you'll see.

Bad Habits: Old books are my crack. I love Jane Austen and British lit. I got my master's in early 20th century British literature, and that nerdiness hasn't stopped. I have a thing for DE Stevenson and Nevil Shute, Dorothy Whipple and Rumer Godden. I'm always haunting used book sales, looking to rediscover forgotten early 20th century women authors who still have something to say.

On feast days he wore red, the blood red of virgin martyrs and cardinals. His brocade chasuble, a heavy mantle that draped him from his collar to his shoes, was piped with gold, curved at the hem, with a slit for his head. When he walked he seemed to glide, and when he held his hands out to consecrate the Eucharist, the chasuble shifted to reveal his arms, cloaked in white from the linen alb he wore underneath, exposing the narrow cuffs of his black clerical shirt beneath the alb, layer under layer that ended at the naked brown skin of his hands.
Father Robert Souza was a Roman Catholic priest, under the chasuble and alb, and clerical collar (size Pontiff 3) and the black shirt and slacks that are the uniform of the priest.

And under that, boxer shorts.
And under those, the man.
Rob had deliberated over the boxers. For years he had worn bleached white shorts that his mother had ironed, yes, ironed with a heavy hand and an ancient iron that she ran over paraffin for a crisp sheen. When he was old enough to buy his own shorts, he switched to tight, bright bikini briefs, which had amused his fellow seminarians and given him adolescent moments in front of the mirror, admiring his physique, a blue-collar Portuguese boy in Speedos, building muscles to lift a chalice. His former girlfriend had once given him some black silk boxers which he still kept but never wore; after ordination, Rob bought white briefs that somehow conferred respectability with their simple, practical function, and suited his position in the parish.

Then once, when Rob visited with some parishioners who suffered infertility problems, the husband If tight shorts lower the sperm count, and lower sperm count can affect fertility, then men should wear loose shorts to ensure fertility. But when he added the x factor of celibate priesthood into the equation, he faltered. He didn’t need a sperm count, high or low. Rob stood before the underwear kiosk in a department store on his day off, anonymous and average in his jeans and chambray shirt, and weighed his decision.
explained how briefs lowered his sperm count and how, that for healthy sperm, a man should wear looser shorts. Rob worked through the issue as if it were a syllogism, a geometric proof:

When a man has a vocation to the priesthood, he must meet certain qualifications to be ordained: be at least twenty-four years old, a legitimate child, and of sound mind and body, although the Bishop could dispense most impediments. Rob himself had received a dispensation from the Bishop because he had been a few months shy of his twenty-fourth birthday at his ordination six years before, and one of Rob’s classmates received a dispensation because of an undescended testicle. St. Thomas Aquinas had preached, long before the invention of the microscope, that each drop of a man’s seed was like a tiny man, thus sacred, and despite more modern medical understanding, the Catholic doctrine was the same. Although a priest must never put his gift to use, the living seed must be cherished. Rob, sound of mind and body, poised to choose between the guilty freedom of boxer shorts versus the ball-crushing, sperm-killing snap of tight elastic, was glad to have worked it out.
He had worn boxers ever since.