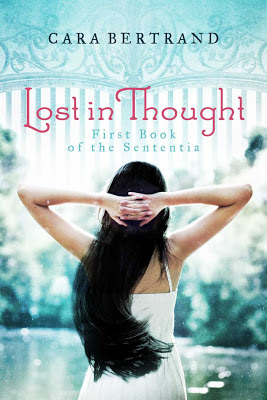 
Synopsis:
Lainey Young has a secret: she’s going crazy. Everyone else thinks she has severe migraines from stress and exhaustion. What she really has are visions of how people died—or are going to die. Not that she tells anyone that. At age sixteen, she prefers keeping her crazy to herself. When doctors insist she needs a new and stable environment to recover, Lainey’s game to spend two years at a private New England boarding school. She doesn’t really think it will cure her problem, and she’s half right. There is no cure, but as she discovers, she’s not actually crazy.

Almost everyone at Northbrook Academy has a secret too. Half the students and nearly all the staff are members of the Sententia, a hidden society of the psychically gifted. A vision of another student’s impending death confirms Lainey is one of them. She’d like to return the crappy gift of divining deaths with only a touch, but enjoys spending time with Carter Penrose—recent Academy graduate and resident school crush—while learning to control it. Lainey’s finally getting comfortable with her ability, and with Carter, when they uncover her true Sententia heritage. Now she has a real secret.
Once it’s spilled, she’ll be forced to forget protecting secrets and start protecting herself. 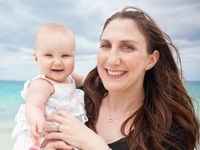 Cara is a former middle school literacy teacher who now lives in the woods outside Boston with: one awesome husband, two large dogs, one small daughter, and lots of words. LOST IN THOUGHT is her first novel and was one of three finalists for the 2011 Amazon/Penguin Breakthrough Novel Award in the Young Adult category.

Prologue
It started innocently, but isn’t that always how things start? My Aunt Tessa and I were shopping at a local antique store, pretty much my favorite way to spend free time. I picked up a heavy candlestick that looked classic, expensive, and at least a hundred years old. As I turned it over to check, I suddenly felt dizzy. I set it down, so I wouldn’t drop it, and sat on an antique bench I probably shouldn’t have. The dizziness passed, as quickly as it came, and I reached for the candlestick again.
This time I did drop it. When my fingers touched the tarnished silver, I had the oddest vision. In my mind, I saw a crying woman in an old-fashioned dress, complete with petticoats and a corset, looking down at a man in a similarly old-fashioned suit lying on the floor.
And bleeding from his temple.
I knew instantly that the man was dead and the woman, with the help of this candlestick, had killed him. I blinked and found myself right where I’d been, on the bench I shouldn’t have sat on, with the murdering candlestick dented on the floor. We bought the candle-stick, and its match, and I told my aunt that I got dizzy and needed to have some lunch. By the time I’d finished my sandwich, I believed it too. But that wasn’t the truth.
The truth was far stranger.