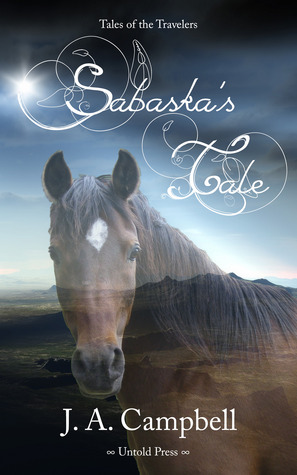 Sabaska’s Tale
Series: Tales of the Travelers
By J. A. Campbell

Blurb:
To Anna, horses were more than a fascination, they were everything. Luckily, she had the opportunity to spend every summer on her grandmother's horse ranch in Colorado. Life was perfect, until she received the devastating news that her grandmother had been tragically killed. Anna knew she was the only member of her family who could take over the ranch and hopefully find new homes for her grandmother's beloved Arabians.
Anna wasn't alone for long. Her grandmother had hired a local teenage boy to help tend the horses for the summer. Anna didn't stand a chance against Cody's quiet charm and the two rapidly become friends. However, even with the responsibilities of the ranch, Anna quickly discovers the secrets her grandmother had been hiding and a legacy that sends her on an adventure she never thought possible. An adventure in the saddle of a horse that wasn't a horse at all. Sabaska, her grandmother's favorite Arabian, was a Traveler; a magical being that could travel between worlds. With Anna at the reins, they find themselves trapped in a fight against evil with the highest of stakes… Their very survival.

Julie has been many things over the last few years, from college student, to bookstore clerk and an over the road trucker. She’s worked as a 911 dispatcher and in computer tech support, but through it all she’s been a writer and when she’s not out riding horses, she can usually be found sitting in front of her computer. She lives in Colorado with her three cats, her vampire-hunting dog Kira, her new horse and Traveler-in training, Triska, and her Irish Sailor. She is the author of many Vampire and Ghost-Hunting Dog stories and the young adult urban fantasy series The Clanless.
Find out more about Julie at  www.writerjacampbell.com  and follow her on twitter @Pfirewolf 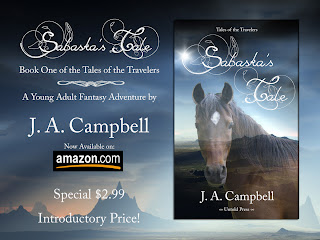 Out There & Stuff (CB)
www.crystalsoutthere.blogspot.com

7/25
Self Publish or Die (Interview)
http://www.selfpublishordie.com

7/27
Just Me, Myself, and I
http://purpleshadowhunter.blogspot.com/