Blog Tour & Review: A Butterfly in Winter by Tara Entwistle-Clark 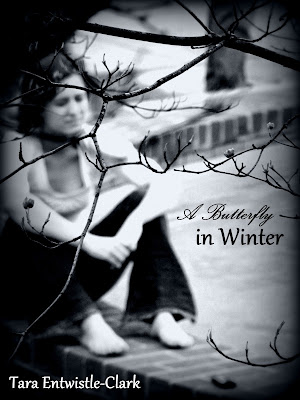 Title: A Butterfily in Winter

Synopsis:
Allison Stafford is fourteen. As if that is not enough to deal with in itself, her parents suddenly move her from her small town in Vermont to suburban Michigan, all in the middle of her freshman year of high school. For Allison, there is more to learn at her new school than just finding her way around. Soon she is attempting to make sense of her newly discovered sexuality, and wondering what it takes to fit in with the "cool" people at her school. Despite tragedy and several mistakes, Allison manages to survive. This novel leads the reader through the murky depths of high school, and reminds us all of the importance of true friendship.
4. I don't take pictures, although I can see if I can add one eventually.
5. Tara is always in the middle of something. Right now, that "something" includes a YA novel called "How Quick Bright Things" and a fantasy novel that is nearly done but has no title. In addition to writing, she loves to read. Her favorite author of all time is Courtney Summers. She thinks you should probably read her instead! No one captures high school better.

I really enjoyed reading this book, as a mother of a 14 year old just starting high school it was a real eye opener and reminder of peer pressure and the drama that unfolds from being a teen. I really hated the parents in this story, I wanted to yell at them that they needed to pay more attention to their daughter and be involved with her. The mother was the worse but that was their rules they brought out the anger in me and I just wanted them to see what they were doing to their daughter or what they were allowing her to do. I think there are a lot of mothers and teens who would benefit from reading this story. I think as parents over our teens we need to put limitations on them and not try to be their friends. Our teens our confused as it is and just want to be accepted, to just fit in and that is what Tara is trying to tell us in A Butterfly in Winter. We all make mistakes, whether we learn from them or keep being stupid is the biggest difference.

Tara is always in the middle of something. Right now, that "something" includes a YA novel called "How Quick Bright Things" and a fantasy novel that is nearly done but has no title. In addition to writing, she loves to read. Her favorite author of all time is Courtney Summers. She thinks you should probably read her instead! No one captures high school better.

Bayberry Hill Park was half an hour from Bethlehem in the small town of Castleton. The park was vast, with hiking trails, campgrounds and a stable. We parked near the entrance to the hiking trails. Patrick grabbed some maps from the information desk and we walked into the forest. It was the beginning of May and everything was green. The forest smelled fresh, like it had just woken from a long sleep, and the trees were at full. It was dark inside the trees, since very little light made its way through the leaves. We were on a well-beaten dirt path. We stopped at a clearing and sat down. Rachel and Patrick sat on a log, with their backs to the trail. Tim and I leaned against a tree, sitting in the damp grass.


“Hey, Tim, what happened last night?” Rachel asked. “We really didn’t get to talk about it. What’s up with Brian and Angie?”


Tim sighed, shrugged, and looked at Rachel. “You know how they are. Angie feels like she might not have Brian’s complete attention, so she invents a tragedy. There is always something. I don’t know. I don’t even know why I bother hanging around them anymore.”


“Well, Brian’s my best friend. I’ve known him since we were both kids. We live only a few blocks from each other and used to do everything together. When Angie’s family moved in, the three of us became inseparable. Angie got breasts, though, and Brian stopped thinking about anything else. I don’t really have anyone but Brian anymore,” Tim explained.


“Tim and I have been hanging out with them forever,” Rachel added. “There used to be five of us, but it’s a long story. The point is we feel obligated to still hang out with them, even though they’re totally pathetic.”


Patrick nodded. “Yeah, I understand. Everyone has people like that.” I wondered to myself if I knew anyone like that. I supposed there had been people back home, but I couldn’t think of anyone in particular.


“So, who’s up for hiking?” Patrick asked. Rachel stood up, wiping dirt off her butt and reached for his hand.


“You guys go ahead,” I offered, knowing Rachel was hoping to spend time alone with Patrick. Tim and I got up, wet from the grass, and walked away from the clearing into a large open field. He took off his jacket and laid it on the ground for me to sit on. I lay down, facing the sky and closed my eyes. Tim lay down next to me, on his side, so he was leaning over me. He kissed me quickly, softly, and lay back on the ground. We stayed there staring at the sky, not speaking, for a few minutes. He pointed out clouds to me and I smiled, breathing in the warm, spring air. I turned over on my side, so I was looking at him, and played with his hair.


“I’m so glad you didn’t wear your hat. You have the coolest hair,” I said.


“Thanks, I think,” he laughed. “You’re so awesome. You’re not like anyone else.”


“You’re joking, right? I am so much like everyone else. I’m boring and plain and I can’t do anything.”


“That’s not true. You’re beautiful, funny, and really smart. I could tell you were smart the first time I met you. I know I never talked to you much, but I listened.”


I thanked him, blushing. I did not handle compliments well, mostly because I did not get them often.