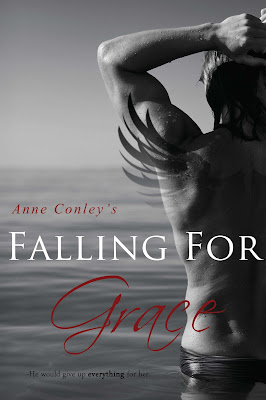 Falling for Grace, book two in the Four Winds series by Anne Conley

Rafael is one of God’s Four Winds, the Archangel of Healing.  He has answered the countless prayers for healing of loved ones, wondering what it was about the emotion that made humans willing to sacrifice so much.

Grace is a lifeguard who has been on Rafe’s radar since she lost a little boy three years ago.  What she doesn’t realize is the green haze that comes over her during a rescue is actually a diving presence who’s about to give up his celestial body to become a very real entity in her life.

While Grace is trying to overcome her own demon, Rafe is discovering his own sexuality, but there’s a darker presence making himself known.  The Deceiver wants what Rafe is getting, and he’ll do whatever it takes to have her.

Anne Conley lives in a small town in East Texas with her husband, two kids, and thirty goats.  She writes all day, reads all night, and is prides herself on not being in the running for Mommy of the Year, as her kids are lucky to make it to school with socks and underwear on.  She brazenly stole her pseudonym from her great-grandmother, a true pioneer woman who raised seven kids alone:  churning butter, plucking chickens, knitting clothes, and putting coal oil on every visible wound.

Rafe was in the bathroom, brushing his teeth the next morning, reflecting on his corporeal body.
Teeth brushing.  That wasn't a normal thing for him.  Neither was showering.  Or shaving.
Usually, his work was done on a different realm.  He traveled in the cosmic soup, visiting people in their dreams, subconsciously, or their conscious minds.  He became a temporary part of their psyche.  He dropped in on surgeons during surgery, to help guide shaky, sleep-deprived hands.  Rafe had passed out ideas to the stumped healers, in a sudden flash of brilliance.  He visited dreams.  He was responsible for many 'Eureka!' moments.
Rarely, had he come to earth in a human body.  He'd been visiting Grace during saves for the past three years in her mind, allowing her to do her job the way she had been trained to do, only providing moral support.  He hadn't had to step in with her, yet.
Head-hopping was one of his many talents.  He had the ability to jump inside of another person's head and sense what they were thinking.  He didn't get clear visions, only vague perceptions.  As tempting as it was to be inside her mind all the time, he hadn't done it to Grace.
Much.
He enjoyed having a body.  It felt good.  He stood in front of the mirror, a towel wrapped around his waist, sensing his body.  He could feel the muscles in his arm and shoulder flex as he brushed, enjoyed the feel of the bristles against his teeth and tongue.  He flexed his toes against the bathmat, scrunching them into the thick pile, feeling his calves bunch.  He rubbed the sleep out of his eyes, delighted at the various ways that the human body secreted by-products.  Marvelous.
The delight in feeling himself was interrupted by Grace opening the bathroom door, surprising him.  He turned to her, and gaped, undone by what he saw.
She was standing there, bleary-eyed, wearing nothing but a knit camisole and a pair of the tiniest bikini panties he'd ever seen on a woman in the flesh.  He was frozen, eyes wide, toothbrush in his mouth, toothpaste foaming and dripping, looking like a rabid dog.  He was aware of his groin muscles tightening, his testicles shrinking abruptly.
Grace was frozen too.  He saw her jaw drop, framing her wide luscious mouth in a perfect O.  Her blue eyes widened, and an attractive blush crawled up her chest to her cheeks.  Her wide eyes traveled from his face down his torso, to the towel wrapped around his waist before dropping to her feet, where they began the climb up her own body.
She snapped her mouth shut, and she began to sputter as realization dawned.
"I-I'm so sorry.  I should have knocked."  Her hands went to cover herself.  "I'm not used to a man living here."  Turning, she tossed over her shoulder as she darted out of the bathroom, "I'll just use the other one!"
Chuckling to himself, Rafe looked down, noticing his erection, making a tent out of his towel.  The tightness in his groin should have been a give away, but he'd been so taken aback by her appearance in the doorway that he hadn't taken in the implications of his blood flow altering its course from his testicles to other places.
Spitting out the toothpaste and rinsing his mouth, Rafe whistled as he went into his room to dress for the day.  It would be exciting, he was sure. 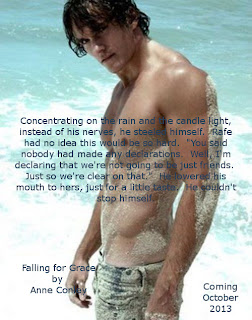 Buy links for Book one in the Four Winds Series, Falling for Heaven, which is .99 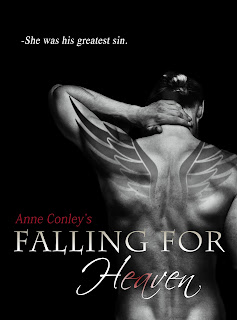