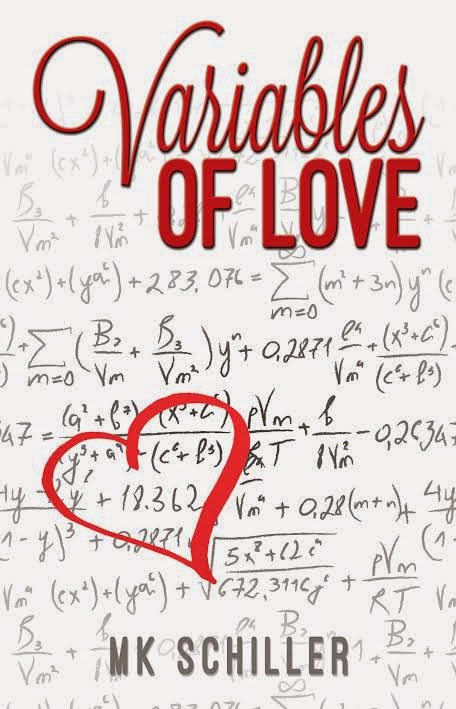 Blurb:
Meena Kapoor knows what life has in store for her. She’s in her senior year at Stanford where she’ll graduate summa cum laude, and then she'll begin her interviews…her marriage interviews. Meena is Indian, and she’s never questioned that she’ll have an arranged marriage like all the generations before her. Not until she meets gorgeous math major Ethan Callahan. Ethan’s sense of humor and free spirit stir feelings in Meena she didn’t know were possible outside of Bollywood movies. It doesn’t hurt that he’s charming and has the uncanny ability to make math sound like poetry, but Meena knows their equation makes no sense in the real world.

Ethan finds himself intrigued by the mysterious, beautiful girl, whose big, brown eyes reflect great pain. His goals are small at first—to make her smile and then to laugh. But he soon wants more, and though Meena is adamant they have no future, he convinces her to share the present. Ethan believes every problem has a solution, but with cultural expectations and family duty among the variables, they will struggle to solve the ultimate equation to find happiness.

I am a hopeless romantic in a hopelessly pragmatic world. I have a full time life and two busy teenagers, but in the dark of night, I sit by the warm glow of my computer monitor, reading or writing, usually with some tasty Italian…the food that is!
I started imagining stories in my head at a very young age. In fact, I got so good at it that friends asked me to create plots featuring them as the heroine and the object of their affection as the hero. You've heard of fan fiction... this was friend fiction.
I hope you enjoy my stories and always find The Happily Ever After in every endeavor.
I love hearing from readers so please write to me!
http://www.mkschillerauthor.com/
Author Links:
Website – http://www.mkschillerauthor.com/
FB author page - https://www.facebook.com/MKSchillerauthor?ref_type=bookmark
FB personal Page - https://www.facebook.com/mk.schiller
Amazon Author page - http://www.amazon.com/MK-Schiller/e/B00FE0FGDM/ref=sr_ntt_srch_lnk_1?qid=1407492789&sr=8-1
Twitter – @MKSchiller
Goodreads author page - https://www.goodreads.com/author/show/7223625.M_K_Schiller

“It is kind of cool…the mating for life thing. There are so few species that mate for life.”
I turned and stared at him, feeling my heart flutter by his very close presence. His hand twitched a bit, like it wanted to grab mine. Was he feeling the same charge of electricity I was? I wanted to be honest with him. After I told him, he would probably rather hang out with a swan.
“That’s why I love them. They are just like me.”
He didn’t seem frazzled by what I’d said. He was quiet, soaking in my words. Rachael told me statements like this were the fastest way to get a guy to leave you alone, but Ethan didn’t even seem surprised. “You mate for life, Meena?”
“My people do”
“Economists?” he asked with an amused grin.
“Very funny.”
“Are you saying there are no Indian divorces?” His question sounded genuine.
“There are exceptions to every rule, but we do have the lowest divorce rate in the world.”
“Why do you think that is?”
“It’s culturally discouraged.”
He nodded. “Maybe, it should be here too. But is that really the only reason? It makes it sound like it’s very difficult to get yourself out of a bad situation.”
“It’s difficult, but usually not impossible. That’s not the only reason. I think the marriages, in general, are stronger and more stable.”
“What makes them stronger? Religion? Culture?” I was quiet for a moment, contemplating my response. “Come on, the answer to the Western woes of wedlock could be solved by this very conversation. Surely, you have a theory.”
“Two words—arranged marriage.”
His eyebrows shot up. I had finally surprised him, but he didn’t hesitate with his next question. “People still do that?”
“It’s not as common as it was, but it’s not uncommon either. Most Hindu marriages are the result of an arrangement.”
“I don’t know anyone who would want to get married like that.”

I sucked in a deep breath, but didn’t let my eyes waver from his. “Yes, you do.”