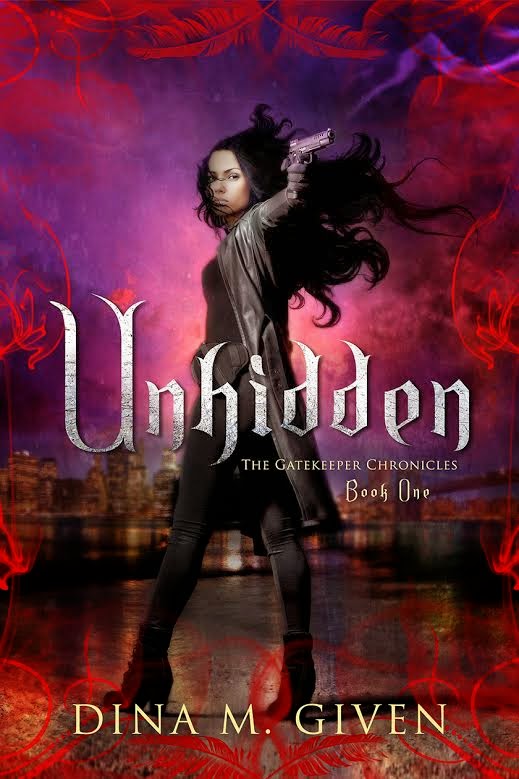 It’s not always easy to differentiate between the good guys and the bad guys, especially when a trained killer may be falling in love with her evil hunter…

Emma must use every skill in her arsenal to stay alive as she tries to solve the mystery of why she has been targeted. Her list of enemies keeps growing - from Zane Shayde, an evil Mage, to a secret branch of the US government - and she doesn't know if there is anyone left she can trust.

To complicate matters further, Emma is inexplicably drawn to Zane in a way she does not quite understand, even knowing her life is forfeit if captured. Who is he and why does he have this effect on her? How can she fight someone who calls to her, body and soul?

Emma is left haunted by questions, doubts and fears as to why she has been targeted, when they will come for her next, and how she will possibly survive against an enemy she doesn't understand.

Dina Given lives in rural New Jersey – home of farms, horses and the largest hot air balloon festival in North America – with her husband, two crazy kids, and one rescue dog. She is an exercise enthusiast and avid lover of food and wine (hence the need to exercise). Dina also works full time for one of the largest healthcare companies in the world. She attributes her ability to juggle family, work and writing to her obsessive, hyper-focused, Type A personality.

Claws, teeth, and a slavering black tongue rose over me as I lay prone on the floor. It could have easily ripped my throat out or killed me in a dozen hideous ways. It seemed to realize this, too. Its jaw cracked and popped, unhinging so wide it could make a meal of my head in one bite. Hot, putrid saliva dripped onto my face, leaking into my open wound and searing it like acid. I hissed at the sensation and turned away; however, I couldn’t escape its fetid breath.
It leaned in, eager and hungry, while I was frozen. I would meet death in the jaws of an inhuman beast. It would drink my blood, feast on my organs, and gnaw on my bones for dessert.
Darko’s hoarse voice called from down the hall. “Don’t kill her! We need her.”
The thing paused and let out a high-pitched wail of anger at being deprived of its dinner. The sound shattered my fear.
I threw up a knee, violently slamming it in the creature’s crotch. Thankfully, it was humanoid enough, that it had the same effect as any other male. He howled and rolled off me into the fetal position. I immediately scrambled backward, sliding along the marble floor. My left arm, screaming in pain, remained limp at my side.
With my right arm, I reached over my head to grab the gun. As my fingers wrapped around the grip, the familiar feeling was like coming home again.
I pointed the Glock down the length of my body, and without a moment’s hesitation, I pulled the trigger in three quick, precise squeezes. The head of the creature I had nut-cracked exploded in a spray of blood and gore.
Shifting the gun’s sight, I found the second creature barreling down the hall toward me. The first three shots hit him square in the chest, yet he hardly slowed. I lifted the gun slightly, took a deep breath and held it, then squeezed the trigger, putting a round straight through its eye and into its brain. That time, it stumbled yet still kept coming. I put four more rounds into its head, not missing a shot, before it finally crashed to the floor only inches shy of my feet.
Darko merely stood there, a sly, half-smile tugging at the corner of his mouth while I unsteadily got to my feet, pushing myself up with my gun hand. Despite the fact that Darko carried no weapon I could see, for a moment, I considered shooting him. He had set me up, kidnapped an innocent girl, and commanded those creatures. Even though he had stopped them from killing me, I was sure he wouldn’t hesitate if he got what he wanted from me.
With him only a few yards away, I had a clear shot. I pointed my weapon at him, and for the first time today, he reacted. The blood drained from his face, his eyes darting around, seeking escape. He quickly came to the same conclusion I had—there was no escape for him.
My finger tightened on the trigger, but before I could get off the shot, a monstrous animal bounded from the shadows behind him. It leapt past Darko, springing at me on all fours. It was the size of a bear with dry, scaly skin, and a mouth full of sharp teeth. Two tusks extended from the roof of its mouth, past its jaw. It bellowed like a foghorn as it charged me.