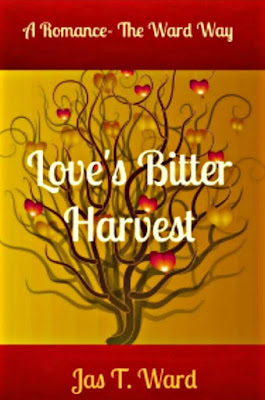 Romance- The Ward Way
Matt and Katherine McCall were high-school sweethearts and in love from first kiss. But time changes people and sometimes the strongest seed of love can only harvest bitterness. Fast forward four years--Katy has a new life far from the one she had with Matt. And she thought it was all worth it. Matt McCall's last four years were full of loss, doubt and sorrow. And now? He's only half the man Katy left behind.
Can love survive in hardened, bitter tainted soil? Or does it eventually die under the coldness of heart-break.
From critically acclaimed author Jas T. Ward, Dead Bound Publishing is proud to present-
Love's Bitter Harvest 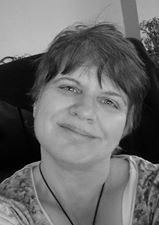 "I am the product of several realities making the whole: a troubled childhood, domestic violence survivor, homeless person, single mother and a suicide survivor. But in every single one of those realities, one thing remained true - my imagination.
Reading and writing were always my escape. It helped me deal with the harshness of my existence at the time and made me grateful for the escapism books gave me. Now, as a writer, I seek to give that gift back to someone that may need the same haven that saved my soul and my creativity as I once had.Born and raised in Texas and spending time living in Kentucky, Ms. Ward spends her days and nights writing as therapy to handle the past. She is the proud parent of three very independent grown children and grandmother to three delightful grandchildren. She has two furbabies that sit and ponder why their human is talking to herself late into the night as she writes out colorful and diverse if not twisted characters and tales.
AuthorJasTWard
Twitter: @AuthorJasTWard

Matthew McCall had never been a sound sleeper. As someone who was made to work on the family farm at the age of seven, it was up with the sun and down with the moon. It took the most exhausting day for him to sleep so soundly that he didn't wake at the slightest sound. It was something that was his nature. Matt was always aware of all that was around him.
That all changed three months ago and now he sought deep sleep as the thing he craved most in the world. Well, second most. But the first was not even possible. Not now. Right now he was wide awake but faking sleep because what else was there to do? He heard the drone of his older sister Beth's voice and he wished she would just go. Leave him alone like he had asked her a dozen times to do.
Daily. Since it happened.
Beth hadn't granted his wish, so his tactic now was to totally ignore her. But he couldn't stand how hurt she looked when he did, so sleep or pretending to sleep seemed to be the better option rather than him witness her pain firsthand.
He was using that tactic once again when this time he heard a different voice with hushed tones mingled with Beth’s. His brow furrowed in concentration to make out the owner of the voice even though his head seemed to know before he did. Impossible. He refused to believe what his grey matter was starting to spell out as fact. But as he listened, there was no denying what his mind was most definitely wrong on as he cracked open one hazel eye and then the other.
Beth and the other speaker were around the corner from the living room, aka his new bedroom, and he pulled himself up to rest on his elbows, fighting the wave of dizziness that swept over him as if in defiance of what his body was forcing him to be. Leaning to the right, unsteady and making the unease worsen, he caught sight of a lovely, long leg wearing a fancy heel below what was probably an expensive skirt. Letting out a long frustrated breath he dropped back down to stare at the ceiling that was long overdue for new coat of paint. Another therapist, social worker, do-gooder or insurance rep, he assumed. It sounded like her, but there was no way she would be here. His mind was tripping and maybe his hope was helping it find the cracks in reality to do so; but his heart knew there was no way.
Closing his eyes, he brought a hand up to rub his hand on his brow and called out to Beth. He seemed to stay thirsty and he needed something stronger than water. Knowing she wouldn't bring him liquor, something he hadn't touched since that night, he would settle for sweet tea. “Beth? Bring me some damn tea.”
“Don’t you even know how to say please?”
His eyes snapped open and so did his jaw as he blinked. Slowly pulling himself back up to his former position, he could do nothing but stare.
She looked so different. Well-polished and dressed with perfect hair, clothes too, despite what he knew were Fred’s paw prints on the fine material. Her makeup was flawless—something she never wore before. But behind all that glam, it was her. The girl next door was barely recognizable, but he would have recognized her anywhere even if he were blind. His heart started racing and now the dizziness wasn’t from his condition, but from the overwhelming wave of emotions that overtook him in seconds. Amazement, disbelief, anger, fear, hope and some he didn’t even want to analyze. His hazel eyes usually hazed with pain and the side-effects of meds blazed with all those feelings and more. His lip tugged up into a sneer and he fisted the bed covers under his hands.
His voice was gravely and hoarse, words spat out and edged with a gruff growl, “What the hell are you doing here?”
Katy wasn’t surprised by Matt’s reaction. After all, it had been almost four years since they had last seen each other. But there wasn’t a week that had gone by when the memory of the day she left her husband, her home and her life behind didn’t haunt her. And judging by Matt’s reaction, she wasn’t the only one who was tormented by the ghost of their past.