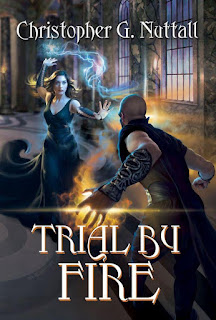 Three years ago, Emily killed the Necromancer Shadye before he could sacrifice her and destroy the Allied Lands.  Now, the shadows of the past hang over Whitehall as Emily and the Grandmaster travel into the Blighted Lands to recover anything Shadye might have left behind, before returning to Whitehall to start the fourth year.  For Emily, it is a chance to stretch her mind and learn more about new and innovative forms of magic ... and to prepare for the exams that will determine her future as a magician.

But as she starts her studies, it becomes clear that all is not well at Whitehall.  Master Grey, a man who disliked Emily from the moment he met her, is one of her teachers - and he seems intent on breaking her, pushing her right to her limits.  In the meantime, her friends Alassa and Imaiqah are acting oddly, Frieda seems to be having trouble talking to her and - worst of all - Caleb, her partner in a joint magical project, is intent on asking her to go out with him.

As she struggles to cope with new challenges and to overcome the demons in her past, she becomes aware of a deadly threat looming over Whitehall, a curse that threatens her very soul.  And when she makes a tiny yet fatal mistake, she finds herself facing a fight she cannot win, but dares not lose... 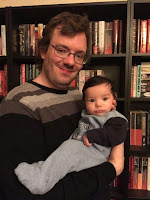 Christopher Nuttall was born in Edinburgh, studied in Manchester, married in Malaysia and currently living in Scotland, United Kingdom, with his wife and baby son.  He is the author of twenty novels from various publishers and thirty-nine self-published novels. His books have sold over 100K copies in the last year. His latest book, Trial By Fire (Schooled In Magic 7) is currently an Amazon bestseller.

Connect with the author on the web:

The Schooled in Magic series draws on so many different inspirations that it’s hard to say just when and where it jelled into its current shape.  It started as a combination of a desire to do a ‘wizard school’ story and a ‘time-traveling expert’ story – the latter generally covering a person being thrown back in time and using modern knowledge to reshape the primitive society facing him.  (The classic example is Lest Darkness Fall.)  I played around with the idea of having the universe set in the distant past, then decided to put it in a very different universe instead – both to escape the Harry Potter connection as much as possible and to allow more room for storytelling.  If I created the universe myself, I could make it be whatever I wanted

Designing Emily (the heroine) was a more complex task.  I wanted a flawed personality, to allow her room to grow and be shaped by her new world as much as she shaped it herself.  I drew on my own experiences at school, then researched mental conditions and their impact on teenage children; Emily, although she doesn’t know this because she has never been tested, is autistic. This is partly because her parents were emotionally abusive; Emily simply never had the socialization that most people take for granted.  But it also gave her a good reason to step into another world and never look back.
This makes her appallingly bad at social cues, for example; she completely misses the fact that some boys (and even a girl) are interested in her.  To meet this lack,  I crafted two friends for her; Alassa originally started life as a bully, then wound up as one of Emily’s first real friends.  Imaiqah was one of her victims, then became Emily’s other friend.  Together, they help make her stronger.