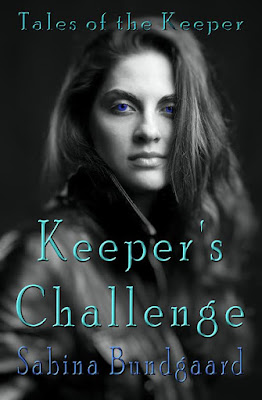 Blurb:
I am the Keeper of the covens book, but have no magical powers.
I have always walked my own way and am proud of what I’ve done. My beloved bookstore is my safe haven.
Now trouble is brewing in the magical world. Three Keepers have been brutally murdered, their books missing.
Now it is after me and my book.
Teaming up with agents Vladimir Stanislav and Jake Levis is my only chance at surviving.
My name is Anna Carringthon, and I am the Keeper of the Invicto. I will protect it to my death.

Sabina Bundgaard lives in Denmark with her husband and their two children. By day she races around the countryside, delivering mail and packages to people. By night… Well, that’s a different story.
While drinking one of her many flavors of tea, she delves into the mysterious realms of her imagination. Writing about everything from Elves and Dragons to Romance and Erotica, she tries her wings to see where they will take her.
Her favorite pastime when not writing is reading, making jewelry and speaking to her friends all over the world, celebrating their victories and happy times.

Teaser #1
“You will do as told this minute, young lady. You are not to have any further contact with those two detectives.”
Her mouth twisted like she just tasted something sour.
“Furthermore, you are to come back to the coven and stay there. The book is not safe in your store, and I am not willing to risk something happening to it. Not now.”
Holding out her hand, she looked me directly in my eyes.
“Better yet, hand it over this instant.”
“What?” I felt sucker punched. I’m the Keeper of the Invicto.
“Clearly you are not capable of protecting it, so I need it. Now.”
My great-grandmother had warned me about this. She told me the day would come were my mother would make some ridiculous excuse to get her hands on the book. There was a reason why she chose me to be the next Keeper and not my mother. Lifting my chin, I stood my ground.
“No.”

Teaser #2:
“What happened?” Maris stood right in front of me, her entire aura lit up by her worry for Lucie.
“Mother is currently lecturing the staff and the two PSP detectives in there about Goddess knows what. I’m hiding out here until she’s done.” Letting my head fall into my hands, I gave into my fear and worry for a few seconds. “They knew what attacked us last night, Maris, The second I described that, that… That horrid thing, they grabbed me and ran toward their car to get here as fast as possible. You don’t want to know how many traffic rules we broke to get here.” My words were garbled, and I was too exhausted to care.
“Will she be alright?”
Nodding, I took another sip from my cup. “I’m just waiting for Mother to be done and then come and yell at me.”
Maris sat down in front of me, grabbing both my hands.
“She does love you, you know?”
I couldn’t help but to snort. “She has a funny way of showing it, Maris.”

Teaser #3:
The room was empty. Frowning, I looked around. Had I missed him somehow? I knew I heard someone. Just to be sure, I grabbed the door handle. Locked. A sound behind me made me jump. I wasn’t imagining things, I heard someone this time.
Grabbing the gun I was carrying, I took the safety off. My hands were still shaking a little, but after a few deep breaths, I was all good.
“Whoever the hell you are, get out now.” I was beginning to feel anger burning in my veins. No one was going to get into my store to wreck it twice. No one.
“There’s no reason for the gun, Miss. I can’t come out into the light at the moment, but if you could move a little closer?”
A snort escaped me. Riiight. “I’m not that dumb. Get out where I can see you. Now.”
A sigh came from my right side.
“Don’t say I didn’t warn you.”
What used to be a man stepped out from the little shadow there were behind one of my bookshelves. A dark fedora was perched on the top of his head, hiding some of his face. He was wearing a suit. Since when did crooks wear suits? A sliver of light came through one of the windows and I almost gasped when I truly saw him.

Hi everyone!!
I am here today to talk a little about my dream cast of Keeper’s Challenge ever should be made a movie.
Well, a girl can dream, right? ;-)
So…. Here goes.

Anna Carringthon is fierce, determined, loyal and stubborn. I think the actress Rachel Weisz would fit her perfectly. The movies I’ve seen her in always made me smile and I admire her enormously.

Chris Pratt would be a very good candidate for Anna’s wild cousin Lucas. And he has that cute glint in his eye that I always imagined Lucas would have.

Now for Vladimir Stanislav….. Hmmm… Well, it was a bit trickier to be honest. And yet once I found Rob Lowe, it all made sense to me. *grins* So…. My favorite actor playing Vladimir would definitely be Rob Lowe. Not to forget, he’s quite fine to look at too. ;-)

Now Jake Levis is a different matter. He’s gruff, rude, have a bad temper and curses. A lot. Since I am from Denmark, it made perfect sense to pick a Danish actor that would fit him. And Nikolaj Coster Waldau is in my mind a perfect match. (You might know him from Game of Thrones)

So… The last one on the list is Anna’s mother. Now she is quite the work. I never really did like her, although certain events in my next book Keeper’s Fate does redeem her just a tiny bit, I still don’t like her. She’s a cold hearted woman. To put it mildly. Have you ever seen Charlie’s Angels? Remember the one were Demi Moore was the bad guy? Okay, woman. She has that look around her that screams… well, a certain curse word. So, in my mind, Demi Moore is absolutely perfect to play Anna’s mother.

Well, this was my take on the dream cast if Keeper’s Challenge ever should me made into a movie.
What do you think? Do you have someone else in mind?