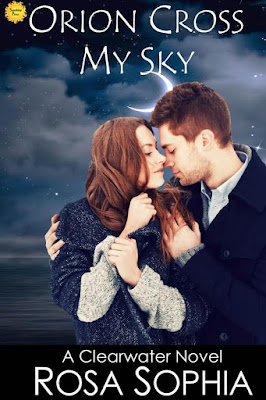 Blurb:
Tammy Pendleton thinks she’s broken beyond repair. Sheltered by her parents, a victim of sexual abuse, she wants to escape but doesn’t know how. Until her cousin Clara leads her away from the Pendleton estate, and into Clearwater.

Orion Bennett is a motor-head who works at Pete’s Service Station. At nineteen, he is battling depression. But he’s also suffering with trigeminal neuralgia—the suicide disease—and he’s desperate to escape the pain.


When Tammy wanders into the shop one day, she finds herself strangely comforted by the scents and sounds of the garage. Although the pain they suffer is very different, they discover comfort and understanding in one another. The companionship they share has the power to heal. The question is, will they let it?

Tammy was quiet for a long time until she stopped and looked up at the sky.
“You know, lately, I think about you like you’re part of it,” she whispered.

“Part of what?” He tugged her near him as the sun began to set. They were alone on this road, soft yellow light emanating from the windows of houses around them.

“Part of the sky.” She reached up as if to touch his face, then seemed to think better of it. “I read somewhere once that people are part of the stars, that we come from somewhere up there, and when we die, we become stars again.”

Her expression was blank, and it worried him. He remembered what Clara had told him about Tammy’s breakdown, the way she’d thrown herself into the closet. He’d learned about the attic, how Clara and Tammy had hidden in the dark from Harris Pendleton. How they’d grown accustomed to being in the shadows, the cobwebs. It seemed that Tammy had been thrust into the world beyond the attic without much preamble. She hadn’t been prepared, and she wasn’t ready now. Looking at her, she seemed empty for a moment, and the void in her gaze made him uneasy. But then, her eyes brimmed with unshed tears, and he cupped her face in his hands.

“You’re my Orion from the sky.”

She pressed herself against him. Her lips were cold and chapped, but he moistened them gently, kissing her the way he’d wanted to for weeks. And this time, because of the injection, he was able to feel her lips against his without pain. There were no shocks, no invisible knives slicing his flesh—just her soft warmth against him.