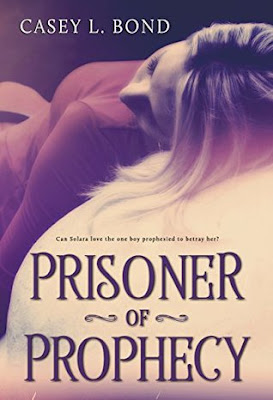 Blurb:
The only two things that seventeen-year-old Solara longs for, are the very things that she can’t have. True love isn’t an option when you’re told who to marry. Freedom isn’t possible when you’ve been held captive your entire life.
Just when things in her life seem to be falling into place, she learns that she’ll never be free to live or love as she would like. She is a prisoner of prophecy. The dead have been resurrected to guide her. The fallen angels who prowl the Earth want to manipulate her. And the most frightening monsters of all are human.
Can Solara love the one boy prophesied to betray her? Will she learn to embrace her destiny, or will she be crushed by the weight of the world on her shoulders? 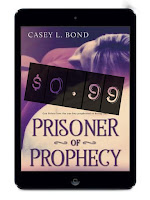 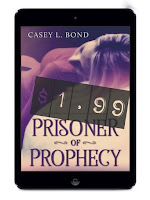 The behemoth of a man, extremely tall, broad, and muscular with long flowing amber hair and cobalt-blue eyes walked toward me. I countered his progression by moving backward toward the fire, toward Faric, and toward safety.
His skin was luminous and without flaw. He was dressed in what I could only describe as a white loincloth with a golden plate of armor over his chest and some sort of engraved gold-armored plates on his forearms and shins. His enormous feet were clad in leather sandals with laces crossing one another on their journey up his ankles.
He inched toward me, and I heard a loud whoosh rush past my ears. I grasped them and sunk to my knees, unsure of what had caused the loud sound and wind turbulence at the same time. I looked back up at the mountain of a man and saw a pair of beautiful stark-white wings spanning at least ten feet to his sides. I clasped my mouth at the sight of him.
I could hear Faric approaching hurriedly, and then I heard him cry out as if in pain. The angel glowered in his direction, and his arm extended toward Faric, who was pinned against a tree by some invisible force. He panted and grunted in battle against the pressure of the invisible restraint.
“It is time, Solara,” the man said with a melodious tenor voice. He stepped toward me, lowering his hand.
I looked at Faric, still plastered to the tree despite the angel dropping his hand.
Before I could look back at him, I was hoisted into the air by an invisible force as well. With one strong beat of his wings, the angel lifted himself off the ground and hovered across from me, maybe twenty feet away. I looked down at Faric, and terror flashed through his eyes as they met mine. I started to panic. My breath expelled in short, ragged huffs. I frantically tried to look for whatever was suspending me in the air but could see nothing.
The angel smiled and lifted me higher toward the canopy.
“Let me down. Please, I beg you. Let me down.”
He just looked at me before turning to survey the area behind him. I heard another whoosh before my hair lashed my face.
Hovering beside the angel was another beautiful man with short dark hair, light-gray eyes, and sun-kissed skin. His armor was similar, except had black metal to match his onyx wings.
He smirked and looked arrogantly at the white-winged angel. “Sorry, I’m late.”
The white angel laughed heartily and said, “Do you not grow tired of hell, brother?”
The dark angel laughed and said, “My hell is currently situated on Earth, and so I am thoroughly enjoying the sins in which I am currently able to partake.”
“Excuse me, I hate to interrupt, but put me down.” I pointed toward Faric. “And let him go.”
Both angels burst into laughter as I was whipped around to face away from them. My hair was blown over my shoulder, exposing my back completely.
The white angel’s voice resounded through the forest. “Chosen one, you will now receive the mark of the Creator.”
Terror flowed through my veins as just as his voice boomed and reverberated through the forest. Crows flew from their perches, blending with the black of the sky, leaving an ever-fading cacophony in their wake.
It can’t be that bad to get this mark thing, right? I mean, the examiner looked over every square inch of my back to try to find it, so it must be small.
I looked back over my shoulder in time to see the white angel draw a long, glistening sword from behind his back. It shone with light, and he approached so fast, I couldn’t even comprehend how he’d moved. Deep, hot pain flashed down the length of my spine.
Before I could even scream, I heard a sickening crack behind me and looked back still trying to recover from the sword’s slice. The dark angel’s whip dripped with flame before I saw a flash. A searing pain blazed across my shoulder blades from left to right. The scream released from my throat didn’t even sound human. My vision blurred, and my muscles fell limp and useless against the blinding pain.
As my head bobbed on my chest, I caught a glimpse of Faric, still pinned against the trunk of the oak below. He was screaming and thrashing against the invisible forces that held him, looking up at me.
Then all went black.